Slavery and Its Price 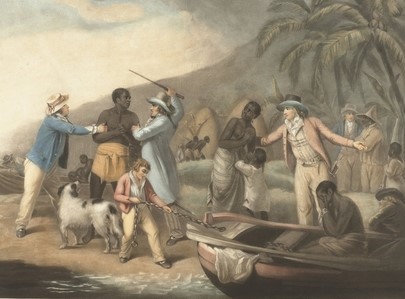 We don’t often think about slavery as a business, but it was.  Slave labor was critical to much of the American economy long before the American Revolution, and for nearly a century after it.  Slaves were commodities, like livestock: they were bought, sold, bartered, and insured just like any other property. The story of their use as commodities is a grim one, and it has been starkly told in a recent book by Daina Ramey Berry.

This past summer I shared a stage with Ms. Berry at the Great Labor Arts Exchange in Silver Spring, Maryland. I was talking about my historical novel, and she was discussing her scholarly work The Price for Their Pound of Flesh: The Value of the Enslaved, from Womb to Grave, in the Building of a Nation.

She was riveting. Her book is an objective and detailed look at how slaves were treated as commodities, how their value was assessed for the market in the American domestic slave trade. She put ten years of research into this book, and it shows.

She wisely chose to order her book along the chronology of a human life, rather than that of the centuries.  She outlines the market prices for enslaved bodies in chapters dealing with a human life cycle from before conception to after death.  Yes, there were prices for slaves before conception, because enslaved people were considered as livestock, and the capability of “breeding wenches” was important, especially after it became illegal to import slaves from Africa. Berry cites records showing cases where women clearly did not have a choice as to their impregnator, whether it was their enslaver himself, or a man of the enslaver’s choice.

When enslaved people were sold for breeding, they were sometimes stripped naked on the public auction block, their private parts examined, as well as their muscles and their teeth.

Babies were sold—Berry tells the story of a baby girl Rachel sold in 1854, through the eyes of a minister visiting from Boston. Rachel’s seller had faced financial difficulties and had to sell Rachel’s mother before she gave birth, but could claim the baby as his property. Southern men nearby apologized to the minister—“We are very sorry that you happened to see it. Nothing of the kind ever took place before.”

Berry also chronicles the sale of children, citing the records of children of prisoners at the Louisiana State Penitentiary when they reached the age of 10. Depending on the circumstances, the money from their sale either went to the mother’s enslaver or to the state. Never mind that Louisiana law at the time prohibited the sale of children away from their mothers until they were 14. What were these kids and their mothers going to do, call a lawyer?

Even Death Was No Escape

Berry’s book makes for difficult reading. Not because of her prose, which is clear and remarkably restrained. The stories and the practices she documents are harrowing. It took me a couple of months to get to the end, only to find out that not even death gave escape from being trafficked as property, as a commodity. Much of American medical knowledge was built on the dead bodies of African Americans used as cadavers. It was legally difficult or impossible to get most cadavers, but the bodies of the enslaved could be bought from their owners, taken from prisons, or stolen easily from the graveyards of the poor.  She remarks only briefly on the bitter irony that while African Americans were regarded as less than human while they were alive, they became fully human upon their death, as suitable examples of human anatomy.

White lower-class people often had similar treatment—female indentured servants were imported with an eye to breeding, the orphans of a servant who died were often bound over for money, or tobacco, to pay off their parents’ debts. What’s more, they also occupied prison cells and graves in untended churchyards. But they could also literally run away from this oppression, and they weren’t as easy to find and bring back as were people with dark skin.

Berry’s research stops with the Civil War and the legal end of slavery. I’ve been considering her book in the light of Yaa Gyasi’s recent novel Homegoing, which I wrote about earlier.  Gyasi’s description of the abduction of a free black woman and the taking of her child into slavery immediately after she gives birth gives us a memorable demonstration of how the Fugitive Slave Act of 1850 criminalized the color of black peoples’ skin and decreed that everyone must be complicit in perpetuating slavery. People who had managed to look the other way were forced to make a choice, and many decided slavery had to go.

The criminalization of black skin has never gone away. The cancer of racism still eats at our society, planted deep in us by the business of slavery.