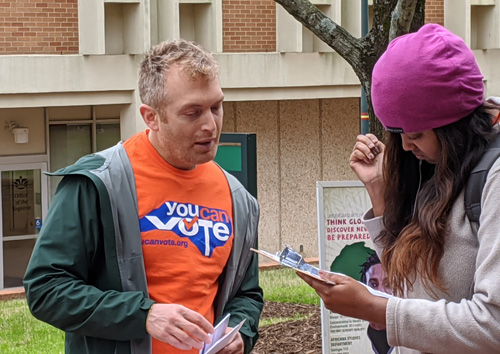 It was an exhilarating, exhausting, inspiring week with Common Purpose in Charlotte, North Carolina. We partnered with You Can Vote, an organization that “trains and mobilizes volunteers  to register, educate, and empower all North Carolina citizens to successfully cast their ballot.”

Common Purpose bills itself as “Your On-Ramp to Civil Action.” The group is based in Seattle, and its mission is to take action to mobilize voters, while investing in the next generation of leaders and building community.” They have been organizing groups to travel to on-the-ground civic volunteer opportunities in key states around the country to create progressive change.

In the orientation sessions, they were clear that we were to take direction from the people in those states. Common Purpose founder David Domke put it succinctly: “Their ground, our boots.”

We Made a Difference

There were 18 of us volunteers, and in our time in Charlotte we registered 310 people to vote. Because of the work we did, You Can Vote not only reached its goal for all of February, but was also 160 registrations ahead on their goal for March.

I didn’t know anybody in our group of eighteen before I came to Charlotte. My flight got canceled. I missed the whole first day. I was a little afraid that I would be out of the loop and playing catch-up the whole time.

As it turned out, there was nothing to worry about. I got a quick orientation from our team captain Jordan Goldwarg and from Zion Lemelle, the regional director for You Can Vote. Soon I was with my team out on a sidewalk, asking people if they were registered where they currently live.

We Learned from the People We Met

We met all kinds of people on the way. Judith Light met an elder who worked on voter registration long ago: “I was working at the downtown Charlotte Transit Center on the light rail platform. She was sitting on the bench waiting for the next train. [When I asked if she was registered] she lit up, pointed at me and said oh, yes! and that she did what I was doing ‘during segregation.’

Changes in the Law Make a Difference

There have been many recent changes in North Carolina, both from changes in laws enacted and from court decisions. Many citizens who have served time for felonies, for example, are not aware that they have the right to vote. That was one area where we knew we could help.

Kylie Knowles wrote, “I approached a young man and asked him our question: “Are you registered to vote at your current address?” He told me he couldn’t vote because he was a felon, and I informed him that he could vote if he finished his probation or parole. He was shocked and registered on the spot.”

Kylie added, “This is the power of information”

This is the kind of work I want to do. It’s the reason I joined Common Purpose.

Why I Joined Common Purpose

I want to do this work because my religious faith impels me to do so.

My denomination has no creed, but it does have seven principles. The first one is that we believe in the inherent worth and dignity of every human being (boldface mine). The fifth one says that we believe in the right of conscience and the use of the democratic process within our congregations and in society at large. To me that means that every citizen has a right to vote, regardless of race, sex, sexual orientation, poverty, or previous condition of incarceration.

Because the right to vote is under threat in so many places in our country, I decided this is the work I want to do, for this election cycle and probably for many years to come.

I realized on my first day these people who traveled on their own time, and their own dime, to do this work are likely to be interesting, engaging people. It was an accomplished group: teachers, doctors, nurses, former political staffers, people who had built projects and programs to benefit their community. Because we were working together on something we cared about, it was easy to build camaraderie.

One of our group, Kate Winton, says that she was “just organizing clipboards in the office.” First of all, there’s no such thing as just organizing clipboards: when you’re out there on the street, that organization is really important. And that’s not all she was doing. She asked people if they were registered to vote where they were living. She writes, “I registered a young Vietnamese man who has just become an American citizen!  He said he had already studied all the candidates and was super excited for early voting to start later that week.”

She continued: “A bright-eyed gal on the UNCC [University of North Carolina Charlotte] campus greeted my query about her being registered with an enthusiastic, “Yes!  I’m so excited—this is my first election!!”  I cheered her on and handed her extra refrigerator cards to give to her friends.” (“Refrigerator cards” are reminders to put up on the fridge or other constantly visible place.)

We stayed for the first day of early voting. When I was asking students going by if they were registered, some replied with big grins, “Yeah! And I just voted!”

I replied with my own grin. “Feels good, doesn’t it?”

Since We’ve Come Back

I was happy when we came back. The situation in North Carolina has been fluid, and there’s a lot at stake. The state recently redrew its election districts, in obedience to a court order to fix obvious gerrymandering. There’s a vulnerable Democratic governor up for re-election, as well as a vulnerable Republican senator. Charlotte is divided between two Congressional district. One has a Republican representative who won his seat in a special election in 2019, and is vulnerable this year. I thought that, in some small way we helped. People who should be able to vote were able to vote.

Our trip was in early February. Now, of course, the Coronavirus pandemic has overturned many plans, including those of Common Purpose. We have canceled trips to key states for a while. We don’t know if we’ll be able to make a difference at all.