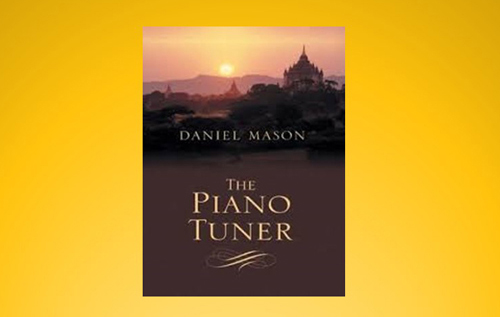 Right away, Daniel Mason’s The Piano Tuner sweeps us into 19th century Burma, as seen through the eyes of a visiting Victorian Englishman:

“[The] image that will become Burma is the sun and a woman’s parasol. He has wondered which visions would remain—the Salween’s coursing coffee flow after a storm, the predawn palisades of fishing nets, the glow of ground turmeric, the weep of jungle vines.” Already we have sights, a hint of memory, a sense of emotion.

Seeing the World through Different Eyes

The Victorian Englishman is Edgar Drake, a reserved man and a skillful piano tuner, who is summoned from his comfortable life in London to tune and repair a rare Erard piano, which is housed in the remote hills of eastern Burma. Drake is an inspired creation, an intelligent and curious man who is completely out of his element, out of his own world. As he finds out about this new world, the reader does, too, but we see it through his 19th century eyes. That’s part of the joy of historical fiction.

Historical fiction author M.K. Tod also writes the blog A Writer of History. For several years, she’s conducted reader surveys—2018’s survey had nearly 2500 participants from around the world. Why do people read historical fiction? She notes that the #1 answer is hardly surprising: for entertainment. But the most important factor in their enjoyment is feeling immersed in the novel’s world, a different culture, a different time, a different way of thinking.

The World of The Piano Tuner

All good fiction takes us someplace. The Piano Tuner does it beautifully. We not only see the landscape of Burma, but we also feel the drenching rains. In fact, occurred to me while I was reading this that understanding how it rains in a place can give you a visceral feel for it. We enjoy a traditional Burmese street celebration, called pwe, and get to know a little about why it happens and who puts it on.  We understand the danger from dacoits, the militarized bandits who terrorized Burma and eastern India. The thrust and cross-currents of 19th-century British imperialism are also woven into the narrative, along with some explanation of the tensions among the many different ethnic groups who inhabit the hills.

The Piano Tuner came out in 2002, so there are plenty of reviews online. One that stopped me short was a complaint about “boring Burmese history,” which that reader admitted she skipped.

Well, no. Obviously. Not for everybody. And to be fair to that reader, the title of the book is not “A Victorian Gentleman Visits Burma.” She thought it was about a piano tuner, and she enjoyed the parts about tuning pianos. Which is fair enough.

It Needs to be Good Fiction

Historical fiction still needs to be good fiction. True, I enjoyed learning about the intrigues of colonial Burma (now Myanmar) about the clothes people wore and the foods they ate, as well as the fact that there is such a thing as an Erard piano and it is considered wonderful. The book would have been much less intriguing, though, without the character of Drake, and the mysterious Army surgeon who summons him. Those two characters are the center of the book, and Moore’s transporting lyrical prose makes it an enjoyable read. It’s still good fiction.

There are other examples of genres that create different worlds. Fantasy and science fiction leap to mind. Much of the pleasure of reading those genres also comes from immersion in a different world.

But some of us like to fact-check our fiction. We like learning about history, about these other worlds in detail. Sure, I suppose there are sites you could check up on details about Narnia or Altair IV, but you wouldn’t find out about something that actually happened.  Tod’s reader survey found that’s an important reason people read historical fiction. My friend Belle says, “All the history I know I learned from reading historical fiction.”

It’s a great compliment to me when people say my historical novel, The Monk Woman’s Daughter, inspired them to look up some bit of history they hadn’t known. Yes, there really was a notorious woman called Maria Monk, who claimed to be a nun made pregnant by a priest. There really was a political party called the Know-Nothings.

There are a lot of times when historical fiction can make you say, “Oh, that couldn’t have happened. It’s just preposterous.” (At least, the authors in my criticism group would say that.) And that’s the part that usually turns out to be true.

As Mark Twain once said, and many people have paraphrased since, “It’s no wonder that truth is stranger than fiction. Fiction has to make sense.”

Sometimes the accepted historical record is more fictional than the novel. An example of that is in Part 1 of this Series, When History is Fiction.

Teachinghistory.org, a national history education clearing house, has some great resources for using historical fiction to learn and to teach history. Most are in its “Best Practices” section.