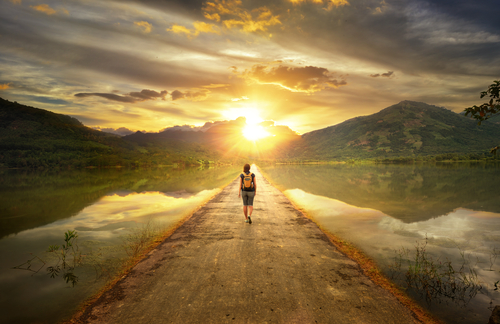 Many of us are familiar with Joseph Campbell’s description of the hero’s journey. Men from Theseus to Luke Skywalker have begun in the ordinary world and received a call to adventure, some impossible and perhaps crucial task. The hero at first refuses, doubting either the importance of the task or his ability to do it. He meets with a mentor, and with difficult missions and danger. He must survive an external ordeal and the inner ordeal of his own doubts and failings.

But he succeeds, and goes back to the ordinary world, where nothing is ever the same.

In her provocative book Jane Eyre’s Sisters: How Women Live and Write the Heroine’s Story, Jody Gentian Bower writes that heroines seem to be more aware of the internal battles they must fight, that the heroic journey is an inward one as well as outward. I was particularly interested in Bower’s choice of Jane Eyre as heroine because her story is set in 19th century England, a time when the possibilities for women’s lives were strictly limited.

That’s often a problem for a writer of historical fiction, especially if the protagonist is female, because in most times and in most societies, women’s options were limited. Bower also points out that a woman’s journey often begins with the intolerable nature of the ordinary world, one which she must leave. Historical fiction must have some resemblance to the facts of the era. And women who left the “ordinary world,” who challenged convention, were ostracized, punished, and sometimes killed. Historical fiction has to recognize that.

Still, let’s face one important fact: if you’re going to write fiction, it has to be interesting. Okay, you could make a case that Sinclair Lewis’s character Babbitt, in his novel of the same name, is incredibly dull, and he is. He tries kicking over the traces for a while, but he just can’t do it—he’s too boring. It is a testament to Lewis’s artistry that he managed to sustain a whole novel with such a stultifying bore at the center of it. And, really, it’s only worth doing once.

Your protagonist must be, at the very least, unusual in some way. Think of Scarlett O’Hara in Gone With the Wind, which opens with, “Scarlett O’Hara was not beautiful, but men seldom realized it.” (Does Scarlett take a heroine’s journey? I don’t think so.) A female hero in a historical setting really needs to have to have at least one unusual idea, one defiant principle, and the character to act on it. A female hero in any setting will usually leave an intolerable “ordinary” world; Sethe runs away from slavery in Beloved; the Grimké sisters leave their comfortable Charleston home in Sue Monk Kidd’s The Invention of Wings; Ethel Williams must leave her home town and her family in Wales in Ken Follet’s Fall of Giants.

Some Change – But Not Enough

There are more female heroes these days, from Katniss Everdeen of The Hunger Games trilogy to Granny Weatherwax of Terry Pratchett’s unique and amazing Discworld series. Still, here’s how little we think about the heroine’s journey: when I was searching for a photo to go with this blog, and typed in “heroine’s journey” all of the photos showed drugs and drug users. Such an outlandish concept that the site just figured I had mistyped it, that I meant “heroin.” I think it’s fair to say that’s not quite the concept I had in mind.

Bower’s book interested me for several reasons, but one was this: the whole time I was writing The Monk Woman’s Daughter, I did not have a heroine’s journey in mind for my main character Vera St. John, but it is a heroine’s journey that I wrote. Bower writes that the ending of the heroine’s tale is not the fairy tale ending where she marries a handsome prince and lives happily ever after. It is that the heroine gets to live life on her own terms. And that’s what Vera does.

There’s always the classic Women Who Run with the Wolves: Myths and Stories of the Wild Woman Archetype, by Clarissa Pinkola Estés.

Bower cites stories with active heroines who act the way male heroes would, such as Feminist Fairy Tales by Barbara Walker, and Don’t Bet on the Prince: Contemporary Feminist Fair Tales in North America and England, compiled by Jack Zipes. She also cites stories with strong heroines in the mythologies of other cultures, such as Not One Damsel in Distress: World Folktales for Strong Girls by Jane Yolen.

And my personal longtime favorite, because I love seeing old stories from different points of view: The Mists of Avalon, by Marion Zimmer Bradley, which retells the King Arthur legends from the point of view of Morgaine le Fay.