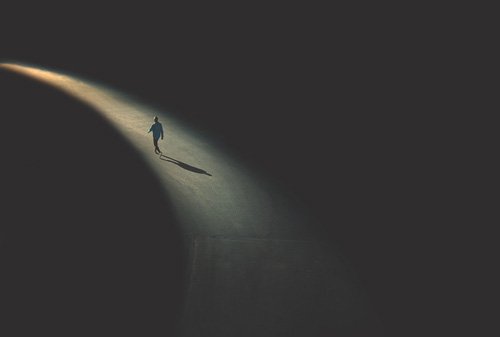 Many years ago, when I was a graduate student in London, sharing a house with other students, a man we didn’t know moved into the house. I invited him to the kitchen for a cup of coffee. I asked him his name, and if he was sharing his flat with anyone else. He said, “The Bible says it is good for a man to be alone.” I thought for a second, and said, “Actually, the Bible says it’s not good for a man to be alone.” *

He never spoke to me again.

I’m pretty sure he wanted solitude.

There’s solitude and there’s solitude. Stephanie Rosenbloom’s recent book Alone Time: Four Seasons, Four Cities, and the Pleasures of Solitude is a delicious meditation on her solo explorations of Paris, Istanbul, Florence, and her home town of New York City. Because she was alone, she felt free to go where her curiosity took her, to discover and explore the small marvels that make each city distinctive and exciting. She cites dozens of books, studies, and observations about solitude, including one study that showed people who went alone to an art museum enjoyed it much more, and remembered much more about it, than people who went with someone else.

Christopher Knight, on the other hand, disappeared into the Maine woods in 1986 and didn’t come out for nearly three decades.  He had no conversation with other human beings, unless you count the one time a hiker said, “Hi,” to him, and he said, “Hi,” back. Knight might never have come to public attention if he hadn’t been stealing food from his neighbors all that time, and if he hadn’t been arrested by a Maine game warden. Even then, he was so good at avoiding other people that the game warden who caught him only did it by using high-tech equipment—equipment so advanced that the game warden borrowed it from Homeland Security on the condition that he not tell anyone how it worked.

Knight’s story is told in Michael Finkel’s book The Stranger in the Woods: The Extraordinary Story of the Last True Hermit. After Knight’s arrest, he was examined by several psychologists and psychiatrists to determine if he was crazy. The short answer is, “No.”

I Want to Be Alone – Is That Crazy?

A forensic psychologist evaluated Knight for the state of Maine after his arrest, and the conclusion was “complete competency,” with the possibility of Asperger’s disorder, depression, or possible schizoid personality disorder.  Asperger’s is not grouped under the umbrella term autism spectrum disorder, or ASD. Finkel  presented several experts with the evidence and analysis in Knight’s case. While Knight does show some of the traits of the disorders, such as apathy to people and his hypersensitivity to sensory changesthe experts were reluctant to label him with a diagnosis. Stephen Edelson, executive director of the Autism Research Institute, quipped, “I diagnose him as a hermit.”

Knight told Finkel that being with other people depletes and confuses him. The hardest part of being in jail for him was the constant presence of other people. He said he doesn’t look in people’s faces because “there’s too much information there.”

Still, solitude only has a chance of being enjoyable as long as it’s your own idea.  Being alone when you don’t want to be is loneliness, or at its extreme, solitary confinement. I found an interesting litmus test for how one feels about solitude in the Duke Ellington piece, “ In My Solitude.” I find it soothing, calming the listener to a quiet, reflective mood, but the lyrics go, in part, “I sit in my chair, and filled with despair. There’s no one could be so sad.” Still, the pictures I found on the YouTube video are serene and pensive.

Solitary confinement, though, is the most severe punishment in the U.S. penal system next to execution, and long periods of it have been found to be deeply damaging to the human brain. There’s not a lot of data available, because most of the population never experiences solitary confinement, and because recent legislation has limited experimentation on inmates. Still, neuroscientists have found degenerative consequences for the brains of people kept in solitary. The hippocampus part of their brains appears to have been “rewired” so that it’s hard for them to find their way around, even in familiar surroundings. A 2016 article, “Isolation Devastates the Brain,” is available on www.solitarywatch.com, which has a lot more information on the effects of solitary confinement.

In writing his book about the hermit in the woods, Michael Finkel went into more depth about hermits, and the tradition of solitude in many of the world’s religions, turning up the Hermitary web site , which features resources and reflections on hermits and solitude. When I visited, it also featured a Kahlil Gibran quote on the landing page: “Solitude: a silent storm that breaks down all our dead branches, yet sends our living roots deeper into the living heart of the living earth. … A hermit renounces the world of fragments to enjoy the world wholly, without interruption.”

Only if it’s your own idea.

I had the privilege of reviewing both Alone Time and The Stranger in the Woods, for different publications. Both books are well worth reading.

My review of Alone Time was in the Washington Independent Review of Books, and The Stranger in the Woods review appeared in Real Change.

* Genesis 2:18. And, okay, what the Revised Standard Version actually says is, “It is not good that the man should be alone.” It refers to Adam and why God made Eve. I think I was still closer to the message than was my conversational partner.