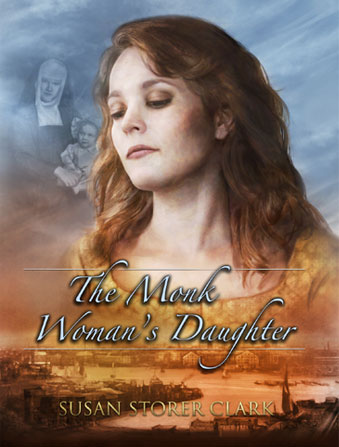 “My mother said she was a nun. That may have been a lie.”

A young pregnant woman named Maria Monk arrived in New York City in 1836. She soon created a national sensation by saying she was a nun, and that a priest was the father of her child. And she wrote a book about it. The Awful Disclosures of Maria Monk described a nightmare world of sexual corruption in a convent in Montreal. It rapidly became the biggest-selling book in the United States until that time, and remained so until the publication of Uncle Tom’s Cabin in 1851. She went on the lecture circuit in a nun’s habit, with her baby in her arms. Her story was discredited, and she disappeared from public view, but for years her book was republished and her stories quoted as truth. What happened to her baby?

The Monk Woman’s Daughter tells baby Vera’s story, following her life’s journey through the squalor of 1840s Manhattan, the bucolic countryside of Flatbush, her work as a hatmaker, the riots and fires of 1850s Baltimore, and the excitement and corruption of Civil War Washington.

Ten-year-old Vera St. John is an adventurous and unconventional girl growing up in poverty and squalor in New York City. She knows nothing of her mother’s story, but knows that the neighbors avoid her mother, and gossip about her, and that she drinks too much.

Vera and her little sister are taken away from their mother, and separated into very different lives. Vera learns about the conflict and scandal her mother stirred up, and realizes that she is going to have to keep silent about who she is. She meets and marries a charming Irishman who fled the famine. Together they make their way to Baltimore, then roiling with anti-Catholic, anti-immigrant rioting, and soon tragedy leaves her to make her way alone.

How is she going to make her way? She’s poor, she’s female, and her mother is still a lightning rod for conflict, even after she’s dead.

A Life Filled with Memorable Characters

The turbulent world of American cities before the Civil War fascinates me. It’s not the sanitized (and dull!) story we learned in school. Political disputes were often settled with fists and clubs. Prostitution was legal, and one of the few economic choices most women had. Pigs ran in the streets of New York. Riots were a daily occurrence in the streets of Baltimore, and Washington City was a half-built capital rising from the mud. Gangs with names like the Plug Uglies and the Dead Rabbits ruled in city streets.

I loved meeting the cast of characters who walked through my mind and into the book. I hope you will, too.

Interested in some of the reading I did? Check out the Resources page.