Death and the Debit Card: A Fable 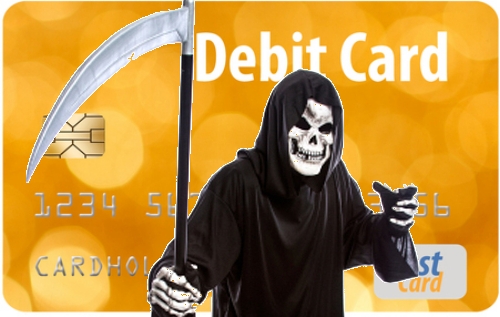 A human spirit was preparing for life on earth, checking through all the bureaucracy of the spirit world. One of the last stops was the mandatory meeting with Death.

Death was smiling broadly. Of course, Death always appears to be smiling broadly, but this time he was enthusiastic about some new technical device. Human sat patiently through the usual spiel about how no living creature knows when Death will come, and how humans in particular have to guess about what is the best way to spend those precious days of life.

Yeah yeah yeah, thought Human, waiting for the moment when Death would proudly display the usual hourglass. At that point in the interview, Death would always laugh uproariously because only he knew how many grains of sand were in each glass, how many days each life would be. Death was fundamentally cruel, no matter how many charm courses Management had insisted he take.

This time was different.

This time Death produced a shiny plastic card. “You see those circles of light dancing in the card? Lovely effect isn’t it? Of course, each circle represents a day in a human life. In this case, it represents the days in your life.”

Human was not impressed. “It’s a pretty toy, but what use is it to me? I still won’t know how many days I have to live.”

“That’s true,” Death acknowledged. “But since modern humans now can actually influence how many days they have to live—at least sometimes—we needed a more flexible instrument. And since so many have developed, how shall we say, aspirations, we needed to account for that.”

It’s not just destiny any more

“Humans can really influence how many days they have to live? I thought it was fixed from the beginning.”

“Not entirely,” said Death, “Not any more. You can actually earn yourselves some more time with healthy habits, and, of course, blow it completely by, say, skydiving while drunk. And then there are the Darwin Awards.”

Death allowed himself a little chortle at the mention of the Darwins, a rare example of something that both Death and humans find to be funny.

“Here’s the fascinating thing, though. See how some of these circles gleam more brightly than the others?” Human nodded.

Death continued, “Those are Somedays. You’re familiar with Maslow’s Hierarchy of Needs?”

Human shrugged. Death was on a roll now. Might as well just listen.

Death went on, “Now that so many humans can take survival for granted—at least until you meet me again—you want your lives to mean something. So you say, Someday I’ll write a book. Or Someday I’ll trace our family tree and give that to my children. Someday, I’ll see the Northern Lights. You all want something different, but you all want that Someday. So each human has a month of Somedays to spend.”

Death gave a hollow chuckle. “A month of Somedays. Get it? Like a month of Sundays?”

A month of Somedays

Human gave a faint smile. Another of Death’s not-quite-funny jokes.

Death decided not to pursue it.

Human pointed out, “I’m familiar with the expression. And isn’t it odd that humans use it to mean ‘a long time.’ You go through a month of Sundays, or 31 Sundays, in a little over seven months. It’s not as long as we humans seem to think it is.”

Death replied, “Well, that’s the point of my little joke, isn’t it? You don’t have as many Somedays as you think. You’d think that, if Someday is a day you’re going to do something you really want, that it would be a day you would spend spend, that all those Somedays would be spent by the time I come for you. But you don’t. The card comes back with all those aspirations, all those Somedays, still on it.”

Human sat and thought about that, and finally said, “I hope I remember to spend them all.”

“Good luck with that,” grinned Death. “See you again. When it’s time to check out.”