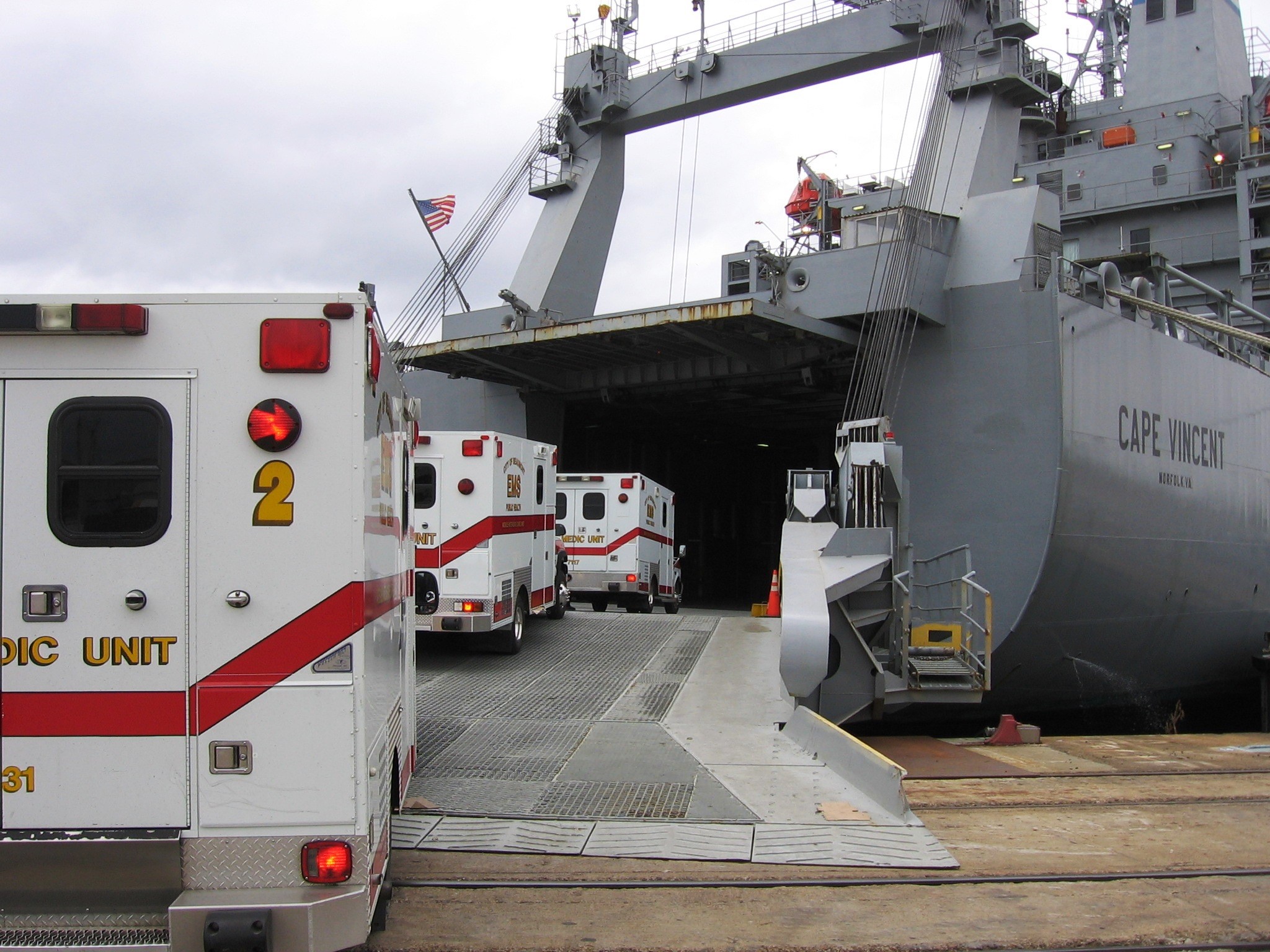 If Puerto Rico, Texas, and Florida had been ravaged by an attack from another country, our military war machine would be all over it. We wouldn’t have cargo ships waiting for their vital supplies to be unloaded even as people are sickening and dying for lack of clean water and medical supplies.

We have an astonishing capability to wage war, to get enormous quantities of supplies everywhere in the world. The U.S. Transportation Command, a command covering several branches of the military as well as some civilian agencies, has means to use a damaged port, or even work where there is no port at all. A lot of that capacity comes from our merchant marine. The little agency in charge of our merchant marine, the Maritime Administration, has used the ships it controls in creative and critical ways for the past 12 years.

I know. I used to work for them, and I got to document how it happened.

Late one night in November 2005, I stood on the deck of the Training Ship State of Maine and looked out into the blue-black shadows that were all I could see of the city of New Orleans. The lights of the Crescent City should have been spread before me in a dazzling arc, but the city loomed dark and silent, as it had since September, when Katrina hit.

The State of Maine was brightly lit, providing food and shelter to port workers, police, firefighters, chaplains—many people who were essential in hurricane recovery, but who had no place to live in the devastated city. Ships generate their own electricity, and are capable of supporting a community without outside help, in a damaged port, just as they do at sea.

I was there to shoot a video about how MarAd’s ships made a difference in hurricane recovery that year. I was with Kevin Tokarski, who was in charge of ship operations then. He and his office had pushed hard to get federal agencies to use our Ready Reserve Force ships, and he wanted to document their use. Kevin and I flew in to Baton Rouge, stayed on the State of Maine while we drove through New Orleans documenting acres of devastation, talked to Port Director Gary LaGrange about how important MarAd ships were to the port’s recovery, saw our RO-ROs (ships that carry wheeled vehicles, which roll on and roll off) with FEMA trailers parked on them, where police, firefighters, and port personnel were living. Port workers also lived on board our training ship, which had berths, food preparation facilities—everything you need, though none of them luxurious. We drove across the Gulf Coast of Louisiana, seeing hundreds of concrete slabs where houses had been. We visited Lake Charles and an oil refinery, where MarAd ships housed and fed port and refinery workers.

In Beaumont, Texas, we documented another use of our Ready Reserve Force ships: a shelter for emergency vehicles. We had two RO-ROs in port in downtown Beaumont, and as Hurricane Rita approached, Kevin’s office had arranged for the town’s emergency vehicles— fire trucks, police cars, ambulances, power company repair trucks, K-9 vans, and more, to go on board our ships, so they’d be ready to roll out and get the town back on its feet when the storm was over.

And that’s just how it worked.

The Department of Defense understands the capabilities of ships. As Kevin says in the video, “That all greased in about 48 hours,” which was amazingly fast for an unprecedented action involving two Cabinet-level departments.

Kevin used our little video, which is still available on MarAd’s web site (you have to scroll down to the title “Danger and Opportunity”) to lobby for the use of the MarAd ships in other situations.  They were used to help out after Sandy and the Haiti earthquake. Three MarAd ships have been activated for disaster relief, all of them training ships from state maritime academies. (Training ships for six major maritime academies are part of MarAd’s Ready Reserve Force.) Massachusetts Maritime’s TS Kennedy was originally activated to respond to Hurricane Harvey, then diverted toward Florida after Irma hit, and is currently in Puerto Rico housing first responders and FEMA ground staff. New York Maritime Academy’s TS Empire State VI was activated for Harvey, was at Key West for a while, and now is headed to Puerto Rico. Texas Maritime’s ship, TS General Rudder, has remained in port in Galveston, housing workers and serving the port.

The Resources Are There

MarAd’s Ready Reserve Force has other ships that could help out—the aforementioned RO ROs, crane ships, and some of the fastest cargo ships in the world. But MarAd’s just one little civilian agency. What if we put the military to work?

They can build an emergency port in 48 hours. The US Transportation Command does it almost every year in an exercise called J-LOTS, Joint Logistics Over the Shore. MarAd sends ships to those exercises. Right now, this capability is mostly seen in terms of the war machine, fighting an enemy in some remote or destroyed part of the world.  And, of course, the planning takes a year. But they could speed up that timeline if they needed to.

Can we maybe rethink the use of J-LOTS? For that matter, can we rethink the way we use our military, these capable, fit, resourceful people who are sworn to protect our country from human enemies? How about using them to protect us from the ravages of natural disaster?

The Maritime Administration is part of the U.S. Department of Transportation. It provides training vessels for the U.S. Merchant Marine Academy, for six state Maritime Academies, and for the Paul Hall Center for Maritime Training and Education, which is affiliated with the Seafarers International Union. The two largest vessels are the ones that have been sent to Puerto Rico.

The Maritime Administration’s Ready Reserve Force program, of which the training ships are a part, keeps 46 ships ready to activate at ports all around the United States.

If you’re intrigued by the description of the J-LOTS exercise, I encourage you to see what else the U.S. Transportation Command can do. TRANSCOM says its mission is to provide full-spectrum global mobility solutions and enabling capabilities to our customers in peace and war.