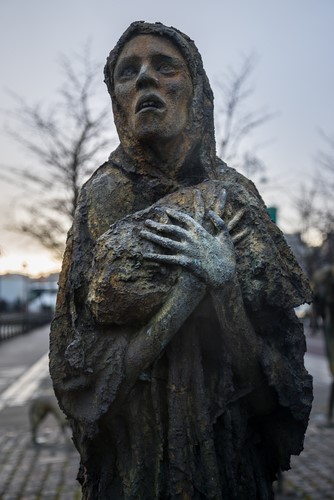 From the Famine Memorial Sculptures by Rowan Gillespie, Dublin, Ireland

We think of famine as horrific.

Lots of people starve to death, and many of the ones left are permanently damaged by malnutrition or scarred by what they have to do to survive. Famine stories are rife with tales of betrayal and cannibalism. Some famines have caused the collapse of entire civilizations.

Still, history has plenty of examples of people profiting from famine, and sometimes even willingly causing it so they can make money or gain power.

Joseph, the son of Jacob, in the Old Testament of the Bible, famously interpreted dreams for Pharaoh so that Egypt could set aside stores of grain from bountiful years, against a coming seven-year stretch of crop failures. What many of us don’t realize is that Joseph and Pharaoh profited enormously from the resulting famine. When Pharaoh told Joseph to open the granaries, he didn’t say, “Give the food away.” They sold it. And when the Egyptians had run out of money, they had to turn over their livestock. When they had turned over their livestock, they had to turn over their land and become slaves. Look it up.

Moreover, Joseph had made it so his family could settle in the best part of the land. That’s Genesis 46:6. He, his family, and Pharaoh did very well out of the famine.

One of the characters in my historical novel, The Monk Woman’s Daughter, is a survivor of the Great Hunger, another name for what we have called the Potato Famine. When I first started researching my book, I thought, as many do, that the famine was a result of so many Irish being dependent on the potato for survival, so when a blight wiped out the potato crop, people starved. What that theory doesn’t include is why the Irish were so dependent on the potato.

Several different sources are given for this quote: “The Lord sent the blight, but English brought the famine.” English landlords had forced their Irish tenants off the good arable land because they wanted to use it to grow grain, fruit, and cattle. The Irish were mostly left with the poor land that would grow little but potatoes. The staggering fact is that Ireland was exporting food to England all during the famine: beef, butter, grain, and fruit. It was more profitable to feed the people of England, so the people of Ireland were allowed to starve.

It’s not that nobody in England knew. Charles Trevelyan, who was in charge of relief efforts for Her Majesty’s Government, said, “The judgment of God sent the calamity to teach the Irish a lesson, that calamity must not be too much mitigated.” And it wasn’t just an offhand remark. He wrote a whole book about it, The Irish Crisis.

Josef Stalin caused what is probably the most infamous famine in history when he decided to starve the farmers of the Ukraine into submission. He forced the people of Ukraine—farmland so productive it’s called the “bread basket of Europe,” to abandon their farms to collectivization, and to ship most of their grain to the cities. In 1932 and 1933, people were dying at the rate of 25-thousand a day. Stalin’s policies killed more than 7-million people.

Even worse, in terms of casualties, was Mao Zedong’s “Great Leap Forward,” the attempt to force all Chinese farmers into collectives. Their methods didn’t work, the farmers weren’t allowed to farm they way they could farm. What they did produce, they were forced to ship to the cities. Most analysts now estimate that between 20- and 30-million people died, but the Chinese government has yet to admit, or even look into, the full extent of it.

The good news is that famine deaths have dramatically decreased in the last 40 years. Famine deaths during the 2000s were a very small fraction of what they were in the 1950s. The bad news is that when people starve, it’s often because of what other people do to them. Stories abound of profiteers stealing food from aid stations and warehouses so they can sell it for profit somewhere nearby.

Why? They’re Not Us

Armartya Sen won the Nobel Prize for Economics in 1998, mostly for his analysis of the causes of famine. He showed that it is caused less by food scarcity than by government policies and inequalities built into the social system. He has written extensively about the famine in his native Bengal in 1942 and 1943, a famine exacerbated by policies of the Churchill government. Churchill didn’t want to hear it, and said, “I hate Indians. They are a beastly people with a beastly religion. The famine was their own fault for breeding like rabbits.”

Not his finest hour.

And, unfortunately, not an uncommon attitude toward people who are suffering. They’re not us. They’re a different color. They don’t behave the way we do. Their religion is different.

While we haven’t had a real famine in the United States since the Dust Bowl of the 1930s—human causes there, too, although few of them were political—we have institutionalized a punitive attitude toward the people who suffer food insecurity. A look at some of our policies implies that we think we should blame children for going hungry. More on that some other day.

The account of the profits made during the Biblical famine in Egypt is in the book of Genesis, Chapter 46.

The History Place has excellent accounts of the Great Hunger in Ireland and Stalin’s genocide in Ukraine.

History.com also has a good long piece on the treatment of the Irish during the famine, and afterwards in the United States, “When America Despised the Irish.”

If you want to know more about the lasting effects of the famine on Irish society, try an excellent collection of essays, Irish Hunger: Exploring the Legacy of the Potato Famine, edited by Tom Hayden. (Yes, that Tom Hayden, the longtime activist who was married to Jane Fonda.)

I got the famine statistics from a Public Radio International piece. They got the ones I cited from a more scholarly article, “Famine in the Twentieth Century,” by S. Devereaux.

There’s no one book by Amartya Sen that I think sums up his philosophy lay people; he’s a little too scholarly for that. Development as Freedom might be the most accessible. Or you can pick from a list of 10 published by The Hindu.

The image that accompanies this blog is from the Famine Memorial Sculpture by Rowan Gillespie, in Dublin, Ireland.

Previous Next
May 18th, 2017|General, History and Historical Fiction|1 Comment