Finding a Way Through the Fog 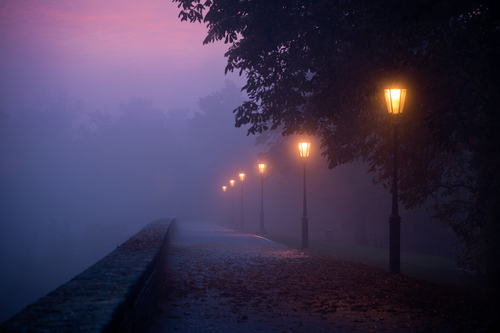 When a member of our book club suggested we read Wendy Mitchell’s book Somebody I Used to Know, I groaned inwardly, and I think some of the others did, too. Several of us had been involved for caring for someone with dementia. I think a lot of people in my age group worry that it will happen to them and are dreading the day, and we didn’t particularly want to read yet another downer about it.

But our friend convinced us that this book about dementia was interesting and heartening, so we decided to give it a try.

A good day can turn foggy at the turn of a page. It happened today mid-type. . .The haze appeared at first, as if I was driving through Patchy mist. Everything slowed right down—time and actions—and my thoughts became more fragmented, like wisps, not fully formed.

I know what to do now. I’m prepared for this. I need to lie down, or simply sit still.

So she does. She falls asleep. When she wakes, she checks the clock beside her bed, which gives her time, date, day of the week. She recognizes the voice on the radio, and slowly does a few mundane tasks. Then she plays solitaire on the computer, and as she does, she feels her mind coming back.

That’s the part most of us don’t know is possible.

We think that a diagnosis of dementia is a sentence of inevitable doom, that our minds and personalities will gradually leave us, that there’s nothing we can do about it once it starts, that we will no longer be useful, that we will lose control of our lives day by terrifying day.

As the old song says, it ain’t necessarily so.

Wendy is a high-profile activist for people with Alzheimer’s disease and other forms of dementia. She blogs regularly, and speaks at conferences all around the UK. Speaking at conferences involves navigating train and bus schedules, as well as strange cities and meeting people she doesn’t know, all of which she manages on her own, with aids she has put into place. She also lives on her own, in a house she purchased after her Alzheimer’s diagnosis. She appeared in an Alzheimer’s Society video, describing how she did that.

What’s remarkable to me, is that she created all these helps after she realized she couldn’t tell what was behind closed doors—like her kitchen—and couldn’t remember what was in the various closets and cupboards. I have to say I might have quit right there, curled up in the fetal position and begged to go into care, but Wendy shows us we don’t have to do that.

She was well equipped to do so. Before her diagnosis at age 58, Wendy was an administrator at the National Health Service, in charge of scheduling nurses and other personnel at a hospital in Leeds. She had an impressive memory that enabled her to keep straight an enormous amount of detail, and her colleagues depended on her organizational skills. She ran regularly, raised two daughters as a single mother, was a whiz at home renovation, and a skilled baker.

Still, she found that the National Health Service and organizations looking for a cure for dementia were not set up to listen her, not set up to include people with dementia in decisions that affect them.

“Of course they’re excluded,” we may think. “They have dementia.”

Not About Me Without Me

She writes about what happened when she went to a meeting the Alzheimer’s Society set up to begin  a Dementia Friends initiative. She tells them she was diagnosed with dementia, and needs a way to explain to her colleagues at work that she has it.

There is silence from every seat at the table, all eyes on me. It’s obvious in that long second that I am the only person in the room who actually has dementia, and, ironically, even though the others came to learn how to share more about the disease, they hadn’t expected to be sitting alongside someone who has it. It feels like an age before the next person speaks.

The next person to speak is the facilitator, who thanks her for sharing. She also writes about health workers who talk past her to her daughters, and her disappointment that the National Health Service is not set up to accommodate people with dementia, or even to do much about it except help people get care.

She has gone on to raise awareness of dementia, and the capabilities of people who have it. Her book, after all, has been a best seller. Her work has reminded me of the old social justice saying, “Don’t make it about me without me.” In other words, don’t set up an organization to address the issues of people with physical disabilities, or homeless people, without including the affected people in the decisions.

Lighting Her Own Way

Wendy figured out on her own how to tell her colleagues, and the way she did it, as described in the book, is ingenious, and could be used in lots of different circumstances in different organizations. Her sense of humor and down-to-earth attitude make Somebody I Used to Be delightful reading, and the technique of her letters to her former self is a good one. She continues to write her blog, Which Me Am I Today?. The most recent post, as of this writing, was December 20, 2018.

By the way—the book club loved the book.