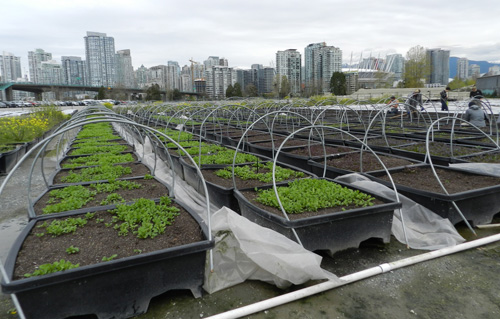 The growing season has hardly started in Canada, but the Sole Food Street Farm is already producing tasty kale and lovage, a soft leafy herb used in salads and soups. The explosive urban growth that’s taking place in downtown Vancouver is all around this former industrial site—new buildings and construction cranes crowd the skyline. The urban farm site may look out of place, but it’s definitely become part of the scenery.

When Michael Ableman and his colleagues started Sole Street Farm in 2009, the Eastside of Vancouver was ragged and run down. It had a large population of people with no homes and no hope, and it was riddled with illegal drugs. The Sole Food vision was to grow produce on waste land, to give jobs and purpose to people who had neither, and to sell the food commercially. The street farms have done all those things, and Sole Food sells what it produces to local restaurants and in farmers markets, but it hasn’t been easy. Ableman tells the story in his book Street Farm: Growing Food Jobs and Hope on the Urban Frontier. I reviewed the book about six months ago for Real Change newspaper, and, on a recent short trip to Vancouver, I went looking for an update.

I talked briefly with Matt Johnstone, who is Administrative Director for Sole Food Street Farms, at their new site on the corner of West 1st Avenue and Crowe Streets. They had moved operations recently from Canada Place, where they farmed for five years, and expect to stay in the new place at least three years. Even with all the development going on in Vancouver? Yes, because the land they’re on is so polluted that it would require remediation even to put up offices or apartments. How can they grow food on it? Sole Food Farms has answered this question before: farm in containers, and first put down a protective plate.

It should be clear by now that we’re not talking about urban gardens, the pea patches and community plots so many urbanites use to grow their own fruit and veggies. This is actual farming, producing food for sale or donation. Farming is a complicated and subtle business, involving knowledge of soil, climate, marketing, and, in the case of urban farming, zoning regulations. In the case of Sole Food, they have also to know about employing workers others consider unemployable; their workers come from the neighborhood, and many of them are homeless, recently housed, or just people with very low incomes. Sole Food is not the only urban farm in Vancouver; the Vancouver Urban Farming Society web site lists 26 member farms.

There’s a wide range of urban agriculture, both historically and globally. If this surprises you, then the basic Wikipedia article on urban farming is probably a good place to start. The Urban Farming organization sees it as a lifeline in food deserts—those areas, even in the United States, where little or no access to the food necessary to support a healthy, active lifestyle. That usually means no large supermarkets within a walkable radius that sell such things as affordable fruit and vegetables, whole grains, and low-fat milk.

People in Detroit have shown imagination in converting burned-out urban wastelands to farmland. The Michigan Urban Farming Institute is probably the most famous, with its two-acre farm in the north end. MUFI is working on establishing an “agrihood,” a neighborhood centered around its farm. Sounds idyllic, and the concept has been hailed as “the future of urban planning,” but MUFI’s had some criticism from other urban farmers who sell the produce and pay local people a living wage to work on their farms. MUFI uses volunteer labor, many of them from the suburbs, and donates its crops to food banks and other non-profits. Their model has come under criticism as being a form of colonialism, and it remains to be seen whether these two models can co-exist.

Detroit has a large number of gardens and farms, and is well suited to support them. For one thing, it’s big: Detroit sprawls across an area where you could fit San Francisco, Boston, and Manhattan. And it’s mostly flat. Its industrial history, and the resulting soil contamination, are certainly an issue, but organizations such as Keep Growing Detroit are active in soil sampling and remediation. They point out that making the soil better can help combat climate change, since healthy soil traps the carbon we have too much of.

Philadelphia’s urban Greensgrow Farm recently observed its 21st anniversary. It was begun by Mary Seton Corboy, who lived in the Kensington section—remember the bombed-out-looking areas Rocky ran through in the first film? and has since expanded so that it employs more than 40 people during the peak summer season and generates $1.8 million in revenue. That farm started with a former Superfund site capped with asphalt.

Greensgrow has drawn its share of controversy, too. Corboy took advantage of the popularity of CSAs—the Community Supported Agriculture groups that sell boxes of produce to so many urban- and suburban-ites, to label Greensgrow’s delivery service CSA—City Supported Agriculture. That has drawn complaints from small farmers who participate in the effort with Community in its name, and from the larger commercial operations that have also co-opted the concept. The site www.farmingphilly.com lists 16 other farms in addition to Greensgrow.

Aside from the fact that urban farming or gardening can get fresh vegetables to city folk, did you know that digging in the dirt is good for you?

An excellent piece broadcast in January by Michigan Radio examines the possibilities urban farms generate for change and growth.

And just as a little historical sidelight: Hazen Pingree, an interesting fellow who fought for the working class and was mayor of Detroit in the 1890s, also encouraged Detroiters to have “potato patches” to grow their own fresh food.