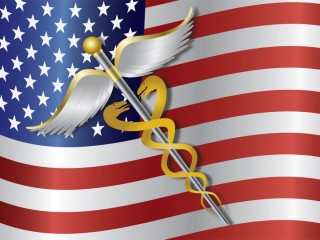 See the caduceus? We in the United States have long used the winged staff with two snakes to symbolize the practice of medicine.

It doesn’t. The Rod of Asclepius, which is a staff with a single snake, is the symbol for medicine. The caduceus belonged to the god Hermes, or Mercury, and symbolized business and industry.

For far too long, we have confused the practice of medicine with the practice of business. You cannot provide fair and effective health care when your primary purpose is to make a profit. Just today, June 6, the Anthem insurance company announced it will be pulling out of Ohio, stranding more than 10-thousand people without health insurance. Anthem warned in April that it would have to pull out of state exchanges if the federal government didn’t continue subsidies for poor people.

I am in favor of a single-payer health care system in the United States. If we get single-payer, I will likely be paying higher taxes.

All during my working life, and now in retirement, I have been paying far more money into health care systems than I get back. Also fine with me. I was able to schedule regular checkups, which meant I got my high cholesterol diagnosed and treated. That meant it didn’t progress to high blood pressure and a debilitating stroke like the one my grandmother suffered in her 50s.

It also meant that the people around me, the people I worked with, could also get checkups and vaccinations. They didn’t go bankrupt because of overwhelming medical bills. If paying more in taxes means we no longer have the most expensive health care system in the world, with far worse outcomes than we ought to have, then let’s do it. If I have to pay higher taxes so that my neighbors, my fellow Americans, my fellow human beings, are not made homeless because of medical bills, then bring it on.

My Prediction: Single Payer within 10 Years

So here’s my off-the-wall prediction: the United States will have a single-payer health care system within 10 years. And I further predict that it will take some unpredictable, nay, bizarre political twists and turns for us to get there.

Take a Look at What’s Going On

We may get a national health system precisely because we elected Donald Trump president and gave him a Republican Congress. The smoke-and-mirrors the Republicans played – “Obamacare BAD, Affordable Health Care GOOD”—has backfired on them, because a lot of people suddenly realized that the two were the same thing. And maybe they just needed a practical demonstration of health care coverage rather than a sea of words.

While the Republicans try to dismantle the Affordable Care Act, state legislatures are getting busy. The California Senate passed such a bill last month.  My own state representative Maralyn Chase, is drafting similar legislation for Washington state. Recent surveys show Republicans now favor going to a single-payer healthcare system. If you want to keep track of states’ activities with single-payer legislation, Healthcare-Now! keeps a running list.

What happened? People got a practical demonstration. Many who recently got health care insurance for the first time have discovered they like it a lot better than impoverishing their families, losing their houses, and watching their loved ones die of curable conditions.

Harry Truman, For a Start

Harry Truman proposed a national health care system in 1949. The Norwegians figured it out in 1912, and the Brits in 1948. Canada phased its universal care system in gradually, with the biggest steps taken in the 1960s. The United States the last developed country without a real national health care system. Yes, I know Bernie Sanders keeps saying it, and it keeps getting fact checked, but it keeps being true.  It is also true, by the way, that the earth is still roughly spherical and that you can get pregnant having sex just once, no matter how many people believe otherwise.

Who is against a national health care system? Historically, doctors were dead set against it. In the United States, the American Medical Association campaigned bitterly and successfully against “socialized medicine” and doctors voted 10:1 against the institution of the National Health System in the United Kingdom in 1948. The British like to grumble about the NHS (the British are adept and enthusiastic grumblers) but they still have it and more than 90% of them use it, even though they are free to go private. American doctors, though, seem to be reconsidering. In the debate over replacing the Affordable Care Act, the AMA has made it very clear that they don’t want  23-million people to lose health insurance, which they would in the current edition of the replacement bill.

People who don’t think the government should run health care, or much of anything else, also oppose it, as do people who associate it with communism. It’s true that communist governments instituted national health systems, but so have many others, and the fact that the communists did it doesn’t necessarily mean it’s a bad idea. The color red used to be associated with communists, too, but you don’t hear a lot of Red State folks complaining about that.

The countries that did this earlier had an easier job of it. The developed countries with national health care are mostly smaller than the United States, and they made their decisions in earlier times, when doctors could still make house calls, and could carry all known medical technology in a bag. Our health care industry— it is not a system—is huge, complex, and an amazing generator of money. Change is going to require a phased-in, well worked-out plan, and the people who will have to do it are President Trump and the United States Congress. My comfort level with having them work it out is about the same as it would be if I found out my upcoming brain surgery was being planned by a flock of squabbling chickadees. Still, we elected them, and they are the ones who have to do it.

Or we’ll get people who will.

Other countries that established universal health care did not have a constant firestorm about abortion and women’s reproductive health care going on in their societies. We do. It may be that we will not be able to stand a system up without leaving abortion and even contraception out of it.

Threatening to exclude Viagra might be an effective tactic.

We cannot go on the way we are. The system we have is cruel, unjust and wasteful. We deserve better.  We must work together to make it happen.