When History Is Fiction 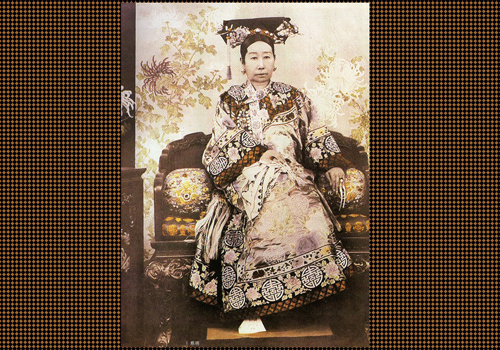 Cixi, the last Empress of China, ruled, mostly from behind the scenes, for 47 years, from 1861 to 1908. For many years, most Europeans and Americans who knew anything about her believed that she was cruel, treacherous, murderous, even sexually depraved.  Much of that impression was created by an influential British oriental scholar, Sir Edmund Trelawny Backhouse.  His book China Under the Empress Dowager was published in 1910, and Annals and Memoirs of the Court of Peking in 1914.

There were others writing in English about China, but not many. The British were working diligently throughout Cixi’s reign to extend their influence in China. Since she frequently opposed their efforts, they had very little good to say about her.

Pearl S. Buck was an American author who had been raised in China. Her perceptive and intelligent writing about it earned her a Nobel Prize. In the forward to Imperial Woman, her fictionalized biography of Cixi, Buck wrote, “Those who opposed her feared and hated her and they were more articulate than those who loved her. Western writers, with few exceptions, described her unfavorably and even vindictively.”

I read Imperial Woman when I was about 11. It was one of the first adult books I ever read, and I loved it.

The novel starts when Cixi is a teenaged girl named Orchid, whose family is a member of the lower strata of the ruling Manchus. She’s summoned to the Imperial Palace to be considered as a concubine, and she’s chosen.

People who write about the empress make a big deal of the fact that she was a concubine—you will see it featured prominently in many articles and on most book covers. I’ve come to find this a little annoying: it’s not like young women had a lot of career choices in those days.

The reader sees the central character, now named Yehonala, navigate her way through the complexities of the Chinese imperial court, located in the Forbidden City in Beijing. It was indeed a city, home to thousands of men, women, children, and eunuchs, teeming with intrigue and struggles for power. In the poker game of the imperial court, Yehonala’s hand was trash. She was not from an important family, and she was placed in the lower class of concubines. It is immediately clear that she could easily be shoved aside, or even poisoned, and nobody would bat an eyelash.

Yehonala plays her cards extremely well. In Buck’s telling, she impresses the emperor partly with her beauty, but mostly with  her intelligence, and because she does not conduct herself with the extreme submissiveness expected of the imperial concubines.

She comes to power, not because of her personal qualities, but by bearing a son, when all other consorts of the emperor have only borne daughters.  The emperor dies after a few years. Yehonala becomes Cixi, one of the regents ruling for her young son.  There were rumors that Cixi had poisoned her husband, just as there were rumors that she poisoned her own son when he died as a young man. Cixi, as written by Buck, is certainly capable of arranging for both of those murders.

Buck traces the empress’s life as it unfolds within the Forbidden City, with momentous events throughout China happening offstage. Some readers have criticized her for this, but I think her life probably did in that rarefied environment.

Buck does not make Cixi sympathetic. She does make her human, and believable, which is more important. Her actions are understandable to other human beings, to readers who can imagine being put into the situation she was in. Imperial Woman was an honest attempt to see the real woman.  I would argue that this novel was better history than some of the “history” that preceded it.

If you take a look at the Goodreads discussion about Imperial Woman, you’ll see that the novel is as controversial as its main character. One reader who gave it five stars wrote, “I felt for this Empress and the country she cherished in her own brilliant and steadfast ways, and perhaps even learned a few things about an ancient world that exists alongside my own to this day. And when it comes to the realm of historical fiction, that’s all that I ask for.”

Another reader gave it one star, writing, “This was dull and annoying and cringe worthy and I couldn’t wait to finish it.”

A word of warning from me: Don’t pick up Imperial Woman expecting a central character like the selfless and long-suffering O-Lan in Buck’s far more famous book The Good Earth. You’ll rarely find two women more different anywhere in fiction, and it is a tribute to Buck’s brilliance as an author that both are so well done.

How the History Has Changed

History changes the way science changes: the underlying facts remain the same, but what we know about them, and the way we think about them, does change.

Other biographies have been written about Cixi, as China has opened up, and as new documents have become available.  Jung Chang, author of The Wild Swans, published a biography in 2013, making use of newly available documents, most of them Chinese. Jung Chang sees Cixi as someone who pushed for progress.  Pearl Buck saw her differently, writing, “She resisted modern change as long as she could, for she believed that the old was better than the new.”

That influential scholar and Sinologist, Edmund Backhouse, whose books were referenced at the beginning of this post, may have been the one actually writing fiction. Hugh-Trevor Roper, Regius Professor of History at Oxford and a pre-eminent twentieth-century historian, wrote a biography of Backhouse in 1973, in which he gave convincing evidence that China Under the Empress Dowager was based on sources that Backhouse made up. An important source book, Décadence Mandchoue, (“Manchu Decadence,” a reference to the Manchu ruling class) purports to be Backhouse’s memoir of his time in China. It includes a lurid bedroom scene with Backhouse and Cixi. He said eunuchs washed and perfumed him, and he had to perform like a slave girl in a harem. He also said he had a lasting love affair with the empress, and that he also had affairs with Oscar Wilde and an Ottoman princess. Trevor-Roper dismissed the memoir as a “pornographic novelette.”

The Lenses of History

While very few historians produce their work in a haze of fantasy, they are all part of the societies in which they live, and so their subjects are almost inevitably seen through those lenses. It’s been my own observation that even the effort to be objective is a fairly modern phenomenon. Records of events were often written to make one side look better than another. For centuries, any powerful woman was an aberration, and the men who wrote history saw her power as a product of sorcery, skullduggery, or seduction. Historians are getting better at seeing women as human beings.

Great writers of fiction see the humanity in their characters, and in all of us. Perhaps that is why they are sometimes the first ones to get to the truth.

Imperial Woman was republished in 2004 and is widely available, as a hard-copy book, audio, Kindle, almost any format you wish.

There are lots of fairly recent biographies. The most notable, I think, is Jung Chang’s Empress Dowager Cixi: The Concubine Who Launched Modern China. (See? There’s that concubine thing again.)

Novelist Anchee Min has Cixi tell her own story in Empress Orchid and The Last Empress. I have not read either novel yet.

If you’re not up for a whole book, there are a couple of fairly recent articles online. One from Smithsonian magazine, and one from National Geographic.

Pearl S. Buck was an activist for women’s rights and for civil rights in general. She was the first American woman to win the Nobel Prize for Literature.  Burying the Bones by Hilary Spurling won the James Tait Black prize for biography in 2010.

There are plenty of myths that have been considered history. I wrote earlier this year about Elizabeth I, Mary Queen of Scots, and Sexist Mythology.  We also have a couple of American myths about cowboys–who they were, what they did, and what they looked like.