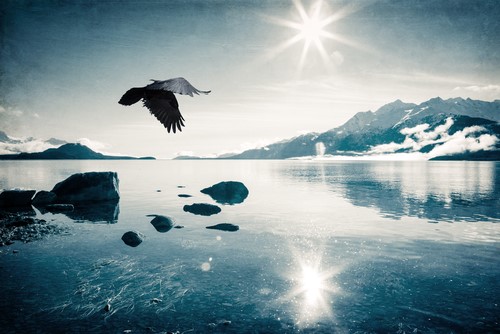 Part of the craft of historical fiction is world-building, creating a world that is true to a real time and place. That world has to engage the reader who knows little or nothing about the time, and still pass muster with someone who knows a lot. The created world may not be pretty, but somehow the work must be beautiful.

Eowyn Ivey has done this masterfully in her second novel, To the Bright Edge of the World. I read and reviewed it several months ago for Real Change newspaper, and the beauty of this book, and the subtlety of some of its construction, has stayed with me ever since.

It was slow going at first. The frame of the double story is a box of letters, journals, and mementoes sent by an old man to a museum curator in Alaska. The old man is the great-nephew of  U.S. Army Colonel Allen Forester, who led an expedition into the interior of Alaska in 1885, and his wife Sophie, who stayed, newly pregnant, at the Vancouver Barracks, and pushed into the then-unexplored realm of nature photography. We go into the box as the curator might, discovering some of Allen’s tools, reading the first entry in his journal and his military orders for his expedition, seeing a picture of his steamship. For a while, the pieces seemed scattered, and it was hard to see how they fit together.

We see through Allen’s eyes the interior of Alaska, when he and his civilization had no idea what was there: the majesty and terror, the mystery and brutal reality of that immense and beautiful land. We feel with him a befuddlement on his first night in Alaska, when he sees the old lame Eyak Indian who was to serve as their guide perched in a tree. Allen writes, “I am left vaguely uneasy.” As a reader, I thought that was just too weird.

But Ivey makes it work, even with the mysterious appearances of an old lame raven alternating with those of the Eyak. As the expedition battles on through death and danger, facing starvation and freezing, they find more magical elements blended with the stunning force of the land around them. The land around them holds more of Ivey’s world-building; while the landscape is clearly the interior of southeast Alaska, the Wolverine River they explore is a fictional river. Allen writes:

As much as the canyon invokes fear in us, I think our silence was one of reverence. It is truly a feat of Mother Nature. The slate walls rise hundreds of feet. In places, thick waterfalls of ice cascade down the rock. Beyond, to the north, east & west, are vast, stony mountains and glaciers that stretch miles into the distance. One such glacier reached down into the canyon & to the river’s edge, so that we were able to touch the extraordinary blue ice as we passed by.

Vancouver Barracks, on the other hand, is all relatively safe and absolutely stultifying. Sophie is a bright, inquisitive, unconventional woman, a former teacher who participates only reluctantly in the prim social life led by officers’ wives. The Army doctor who tells her she’s pregnant forbids her to go on a steamer to Alaska to meet her husband.

It vexed me the way Dr. Randall ignored my questions but instead stood for some time at his shelf with his back to me. He thumbed through his books, mumbled to himself, all as if I were not in the room. At one point he even shushed me. That was too much! I am not a simpleton to be treated with such disregard.

And because the doctor won’t tell her why he’s so concerned about her, or much else about her pregnancy, she goes back later and steals his book on obstetrics.

She is fascinated with birds, and with photography. She goes through the cumbersome process of learning something that nobody around her knows how to do, converting her pantry into a darkroom, lugging the cumbersome equipment around the woods, even constructing a blind so she can get up close to a hummingbird’s nest.

Of course, the other officers’ wives think she’s nuts. One tells her, “With field glasses. And those clothes! You look positively the vagrant in that floppy hat. Where on earth do you traipse off to? Even in the rain and the wind!”

But finally, in one of her photographs, Sophie sees something magical—the bright blade of light along a baby hummingbird’s wing, a light that makes the photograph transcendent, a way to see beyond the edge of the world we’re in.  She writes, “It is only an effect of a beam of sun glancing off a branch behind the subject and can be explained rationally & scientifically. Yet this cannot account for the remarkable sensation it evokes in me, a trembling, thrilling exhilaration, as if I have set something right, and long to do it again and again.”

Ivey has woven together the magnificence of Alaska, the magic in the land and the native people, the mundane details of life in 1885, into a story that takes us to the bright edge of the world, a place where we can discover something powerful, something we may only partly understand. It is an amazing feat of world-building—one of the most important aspects of the craft of historical fiction.

To the Bright Edge of the World is widely available. To read more about Eowyn Ivey, check out her web site, http://eowynivey.com/

Ivey says that some of Sophie’s adventures in photography were based on those of Cordelia Stanwood, for whom the Stanwood Wildlife Sanctuary in Ellsworth, Maine, is named. Central female characters in historical fiction often have to be unconventional in order to be interesting to a modern reader. Still, such women existed—you just have to look to find them!