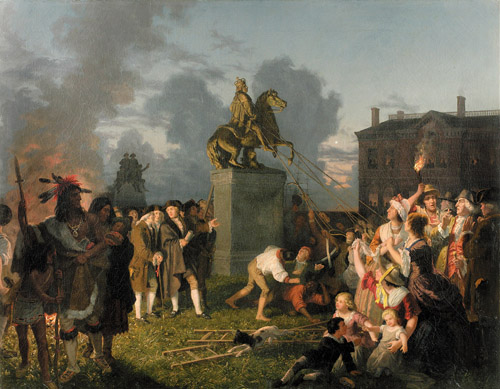 History changes the way science changes. The underlying phenomena are always there, but discovering new information and using new perspectives can profoundly change our study of them.

How the American Revolution Changed

In 2000, I was working at the National Endowment for the Humanities, part of a team of writers producing a book celebrating the Endowment’s 35th anniversary. I had the privilege of interviewing Gordon S. Wood, eminent scholar of the American Revolution.  His book The Creation of the American Republic, had first been published in 1969, and re-published in 1998, so I figured he was in an excellent position to talk about how historical scholarship had changed between the two editions of his book, and over the life of the Endowment.

I asked him what difference the rapid growth in women’s studies and African-American studies had made, and he told me such studies helped us understand better just how radical the American Revolution was. It changed the relationships within the family, the relationships between masters and slaves. That radicalism, which could be seen more in the writings and records of ordinary people than in the Founding Fathers,” made possible the antislavery and women’s rights movements of the nineteenth century and in fact all our current egalitarian thinking.” He added that it destroyed aristocracy and created, “a direct line from the questioning of the Revolution to the Seneca Falls convention in 1848,” the gathering that launched the women’s suffrage movement, as well as the abolition of slavery.

Schoolchildren didn’t learn that when I was growing up. I remember from my history books—and maybe you remember from yours—the depictions of the crowd on Bowling Green in New York City pulling down the statue of King George III.  It used to be that we only learned about history in terms of the leaders, so we would have been focused on the statue, and now historians have come to focus more on the actions of the people at the base.

What Did You Learn in School?

I now realize that the many depictions of that incident, which happened right after New Yorkers found out about the Declaration of Independence, are all wrong. Most of them show well-dressed people, even fashionable ladies and gentlemen in powdered wigs. Eyewitnesses said that it was a group of soldiers and sailors under the command of Captain Oliver Brown who marched up with ropes and started pulling.  Bear in mind these wouldn’t be the smartly uniformed people we’re accustomed to now. When George Washington took command of the Continental Army he described them as “a mixed multitude of people, under very little discipline, order, or government.”

The people who say it happened said there were “a few of the lower classes,” and even a couple of slaves. I haven’t seen anyone who looks African-American in any of these depictions. You do see children and women, when apparently there were none, and in the Oertel engraving that accompanies this post, you see a couple of American Indians, although there apparently weren’t any of them, either. It’s clear that the crowd that pulled down the statue was a lot more motley than the pictures we’ve seen.

What’s more, the statue’s wrong. Apparently, the king statue was dressed not in European-king garb, but in a toga-like garment, in imitation of the Roman emperor Marcus Aurelius. And while the traditional story has been that the statue was melted down to make bullets for the Continental Army—and apparently parts of it were—different parts of king, saddle, and horse kept inconveniently popping up in farmers’ fields for the next century or so.

Recorded History Has a Hard Time Keeping Up

The story of the Christmas Truce of 1914 took almost a century to emerge in its entirety. We may never know the whole story. But the outlines go like this: On Christmas Eve (or Christmas Day, or in late December) 1914, soldiers from the German and Allied lines stopped shooting at each other and perhaps even celebrated together. For a long time, this story was treated as a myth, or maybe as an isolated incident. The accounts were considered unreliable, since every story seemed to involve a different military unit and a different location.  It started with music, or maybe it didn’t. It involved a football game, or didn’t.  But as the 20th century ground on, and more letters and diaries and personal accounts from front-line soldiers began to emerge, it became clear that this was not a myth, or a few isolated incidents, but a spontaneous truce along two-thirds of the battle lines.

There have been several good books on this subject, using those personal accounts. The first one I read came out in 2002, Silent Night: The Story of the World War I Christmas Truce, by Stanley Weintraub. There is still controversy about this truce, largely because various people want to use such a powerful story for their own ends, but there’s no longer any doubt that it happened.

So Why Study History at All?

The radicalism of the American Revolution was left out of our history books for a long time, but it was real, and it underlies many of the values Americans hold today. The history books of our older generation—and some of the current generation—have skated by the bitter shame of slavery and the continued degradation of Jim Crow; if we don’t understand those things, we don’t understand why things are the way they are now.

The Christmas Truce happened, even if we didn’t know about it. It said something about the extraordinary courage and humanity of ordinary human beings. That that is part of our heritage, whether it’s part of the official record or not.

There’s actually a lot of entertaining reading on the statue of George III. Want to know what it really looked like? There’s been a reconstruction.

And it’s at the Museum of the American Revolution in Philadelphia. First thing up on their web site is a quote from John Adams: “The Revolution was in the minds and hearts of the people.” Adams had all his buttons.

Want to know where they found the pieces? Check out the account by the Sons of the American Revolution.

The Christmas Truce appears in the film Oh, What a Lovely War!, which is where I first became aware of such a possibility.

The wonder of the Christmas Truce continues, with a San Diego Opera production scheduled for December 2018: All Is Calm. Plus a September 2018 release of Christmas Truce.