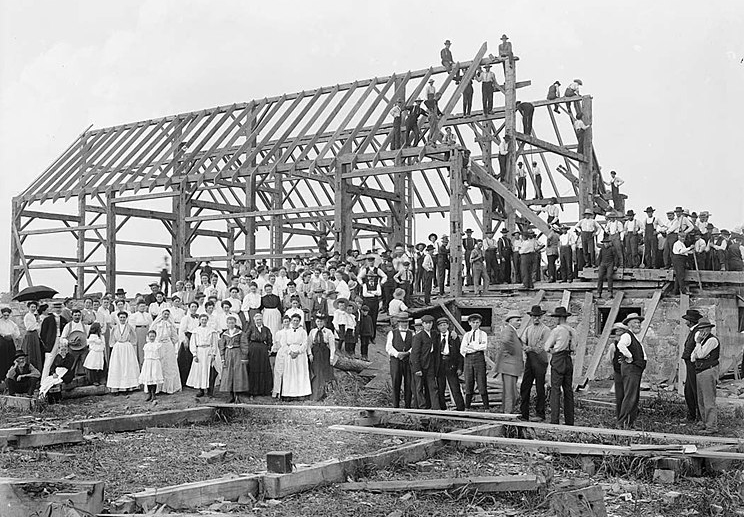 The United States has historically structured access to citizenship, to land, and to economic opportunity in ways that paid off for white people, to the detriment of people of other races. From our first naturalization act, through the Indian Removal Act, the Homestead Act, the Chinese Exclusion Act, and the GI Bill, prosperity-building government policies have been rooted in racism.

Our Declaration of Independence famously declared that, “All men are created equal,” and that they have the right to life, liberty and the pursuit of happiness. It’s easier to pursue happiness in a country where you can vote, where you can’t easily be deprived of property, and there’s a reasonable chance you won’t be kicked out. You’re more likely to prosper if you’re a citizen.

Citizenship Restricted by the First Congress

Congress set the course on that issue in its first session. Immigration was unrestricted. Anyone could enter the country, pay taxes, serve in the military, or run a business. They couldn’t necessarily become citizens. The Naturalization Act of 1790 gave a path to citizenship for “any alien, being a free white person” who had been in the country for two years or more. (This was a little more generous than the  British Plantation Act of 1740, which also excluded Catholics and required a longer residency.) The 1790 act still left out married women, who were considered the same legal entity as their husbands, and indentured servants, as well as enslaved Africans and all Native Americans. People who were born in the country were generally considered citizens. Unless they were born to enslaved Africans or Native Americans.

Not What We Learned in School

Most of us didn’t learn about the “whites only” policies in school. Government publications and standard history books still leave those parts out. For example, the official website of the U.S. Citizenship and Immigration Services tells visitors, “Americans encouraged relatively free and open immigration during the 18th and early 19th centuries, and rarely questioned that policy until the late 1800s.” Immigration, yes. They left out naturalization. A path to citizenship may have been less restrictive than it was in many other countries. By modern standards, it was not. It certainly didn’t support the idea that we are all created equal.

Immigration and naturalization policies continued to heavily favor white people until the middle of the 20th century. That’s a big reason why we have dominated culture and politics for so long. The idea that we are all created equal, that we all deserve equal opportunity, was a radical idea for the 18th century. In fact, it was so radical that we’re still trying to wrap our minds around it. Over and over again, when the government set policy to make things better for “everyone,” it often left people out on the basis of their race.

If you’re going to prosper in a capitalist economy, you have to own property. It helps enormously if you own land. Shortly after he was elected President, Abraham Lincoln urged “that the wild lands of the country should be distributed so that every man should have the means and opportunity of benefiting his condition.” About a year later, he signed the Homestead Act, which granted to “citizens and intended citizens” the ability to claim 160 acres of land for a relatively small filing fee. They also had to build a dwelling and live on it for five years.

Notice this privilege was granted to citizens and “intended citizens.” That is, people eligible for naturalization because they were “free and white.” To be fair, freed African-Americans could also claim land—and some did, even though the filing fees, equivalent to about $450 today, were beyond the reach of many of them. Women could also be homesteaders on their own, and a small number were.

The Homestead Act remained in force for more than 120 years, allocating 10 percent of the land in the United States, more than 270 million acres, to be claimed and settled. A century after its enactment, President John F. Kennedy called it ““probably the single greatest stimulus to national development ever enacted.”

Who Got Left Out?

It obviously wasn’t a great development stimulus for Native Americans. Those so-called “wild lands” that were being redistributed were in fact their homelands. They weren’t allowed to claim land under the act. Very few of them were citizens. Those who were often had to abandon their heritage and live as white people. Deliberate extermination and removal of the native inhabitants had begun with the English settlements in Plymouth and Jamestown. It continued through the Indian Removal Act of 1830, and the work of the U.S. Army protecting white settlers. Only in 1924 did the United States grant citizenship to its original peoples.

The Homestead Act didn’t help Asian immigrants, either. They were not generally considered eligible for citizenship, and increasing anti-Chinese sentiment brought passage of laws excluding or penalizing them. By the time the Homestead Act came into effect, the Supreme Court had already decided Chinese could not testify in a court of law, and Chinese miners had paid the state of California millions because of the Foreign Miners Tax, levied specifically on them. Concerns about “white racial purity” and Chinese taking American jobs, even though they were only about .002 percent of the population, prompted the passage of the Chinese Exclusion Act of 1882, which prohibited any immigration from China for 10 years.

The first one based the quotas on the 1920 census. The second one based them on the census of 1890, when northern European numbers were relatively higher. More than 80% of the immigration visas therefore went to people from the United Kingdom, Ireland, and Germany. Asians remained banned. The Supreme Court declared people from India to be non-white. The group that brought the court case got deported.

It got worse in the Depression. The State Department virtually shut down immigration. Between 400,000 and 2-million people of Mexican descent were deported. At least 60% of them were U.S. citizens.

African Americans became citizens in the wake of the Civil War. The white power structure still made sure to restrict their rights to vote or own property. President Franklin Roosevelt’s New Deal, a series of programs aimed at building American prosperity, was supposed to benefit all citizens. African Americans benefited less than others, partly because local authorities who administered programs sometimes thought black people should not be offered the same opportunities as whites. Even the Social Security Act, which provides pensions for most retired Americans today, excluded farm laborers and domestic workers, jobs many Black people held. This also harmed poor whites and Latinx workers.

Labor unions got the power of collective bargaining, but many unions had a whites-only policy that limited their usefulness. The Federal Housing Administration, which provided federal backing for home loans, had the philosophy that communities with non-white people in them were risky investments, institutionalizing the practice of “redlining” that limits access to housing to this day.

The popular GI Bill provided educational benefits, low-interest home and business loans, employment assistance and unemployment benefits for returning World War II veterans. It sent more than eight million veterans to college between 1945 and 1956. It guaranteed home and business loans, provided a year’s unemployment insurance, and provided medical care. The GI Bill is given a large part of the credit for the booming American economy in the 1950s and 1960s.

It didn’t boom quite as much for everyone. The colleges that would admit black students often had fewer resources than the ones that wouldn’t. Black veterans often could not afford to spend time in school instead of working.  Redlining and other forms of discrimination worked against them. For example, in the New York metropolitan area, the GI Bill guaranteed 67,000 home mortgages for veterans. Fewer than 100 went to non-whites.

As for Native Americans, the GI Bill did not apply to housing on Indian reservations.

The Immigration and Nationality Act of 1965

Black veterans and their experiences were a powerful element in the Civil Rights movement in the 1960s. The Civil Rights movement was a powerful factor in the passage of the Immigration and Nationality Act of 1965. The Act abolished the national-origin quotas that had been in place for 50 years, and, obviously, the whites-only philosophy in place for 100 years before that.

It did not erase the racist attitudes that underpinned those attitudes. Attitudes take a long time to change. Humans tend to keep doing things, and thinking things, the way they have always done or thought them.

America is a Dream

Some people say that the America that treats everyone equitably is a dream, a fantasy. In many ways they’re right. But it is a dream many of us work to make a reality. Without that, nothing would have changed, and nothing will change.

America is a dream.
The poet says it was promises.
The people say it is promises-that will come true.
The people do not always say things out loud,
Nor write them down on paper.
The people often hold
Great thoughts in their deepest hearts
And sometimes only blunderingly express them,
Haltingly and stumblingly say them,
And faultily put them into practice. . .

If the house is not yet finished,
Don’t be discouraged, builder!
If the fight is not yet won,
Don’t be weary, soldier!
The plan and the pattern is here,
Woven from the beginning
Into the warp and woof of America:
ALL MEN ARE CREATED EQUAL.

For Further Reading (or Listening)

This post is part of a series I’m writing on what it means to be white. Here are some previous posts:

What Does It Mean to Be White?

Nice People Can’t Be Racists. Can They?

An excellent article on how far the United States has come since its first highly restrictive naturalization laws. This article came out in 2016, and so does not have the events of the Trump Administration in it.