In Defense of Prissy: A Different Take on Gone With the Wind 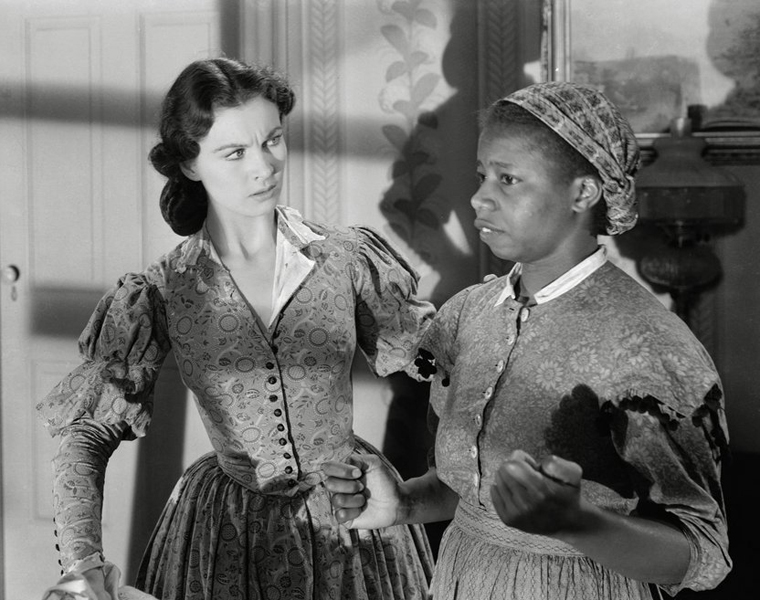 Prissy seems like a mere racist stereotype: a “comic relief” enslaved Black woman, incompetent in normal times and a liability in an emergency. Gone With the Wind has provided us with a powerful, detailed myth about life in the American South before, during, and after the Civil War.

Margaret Mitchell’s book and the lavishly produced movie, both products of the 1930s, created a strong and stubborn mythology about white people and slavery. Many Americans still envision the slavery-era South as a paradise filled with gallant young white men, beautiful white women, grand homes, and Black people content to be enslaved. It has been a durable myth, one that many white people still consider rock-solid history.

Mitchell describes Prissy as a “skinny pickaninny,” daughter of the sensible and hardworking Dilcey at Tara, Scarlett O’Hara’s family home. Only once does Mitchell hint that Prissy might have had some intelligence: “She had sharp, knowing eyes that missed nothing and a studiedly stupid look on her face.”

Prissy, Scarlett, and Melanie Wilkes are visiting Atlanta when the Union Army sweeps in. Melanie has gone into labor, and Scarlett sends Prissy to get the doctor. Melanie tries to tell Scarlett that the doctor is unlikely to come, that there are so many injured and dying that he’s not going to sit and wait for a baby.

Let’s look at Prissy’s most famous actions through her eyes. She goes out into streets filled with people fleeing an invading army. That army brings with it the possibility of freedom for her. By this time, thousands of enslaved Black people across the South gained their freedom just by running to the protection of the Union Army. She could just run in the opposite direction from all those fleeing white people and she could be free. There is so much chaos that it’s likely nobody would stop her.

But her family, all the people she loves, and everything she knows, is back at Tara. The Union Army is comprised of white men, hardly the most trustworthy group of people for a Black girl on her own.

It’s a terrible decision to have to make. She decides to go back.

What the audience sees when Prissy returns is a slow-moving young black woman singing a verse of “My Old Kentucky Home” to herself as she dawdles along the fence. But, as David Vincent Kimel wrote a few years ago in “F*ck You, Scarlett O’Hara,” (asterisk is mine) there’s more to see here if we only look.

Scarlett scolds her for not coming back with the doctor, and Prissy begins to wail her protests. Scarlett stomps off down the stairs to go to find the doctor herself. And then, Kimel writes, “[T]here is this magical moment where Butterfly McQueen ad-libs a line that shows she knew exactly what she was doing with the character. Prissy straightens her back, stops sniffling so promptly it is clear that it was all an act, and proceeds to linger so long on the F of “a few more days for to tote the weary load” that it actually looks very much like she is saying ‘F*ck you’ to Scarlett O’Hara.”

Even if she isn’t saying that, Prissy is clearly angry.

Prissy was the daughter of Dilcey, who was a competent and experienced midwife. Prissy’s declaration that she “knew all about birthin’ babies” makes sense in that context, and made sense to the white characters around her.

Scarlett comes back, having seen the streets of Atlanta filled with the wounded and the dying, finally convinced that she’s not going to get a doctor to come to Melanie. She tells Prissy they’ll have to deliver Melanie’s baby, and Prissy squeals out her most famous line, “I don’t know nothing about birthin’ babies!” Scarlett gives her a powerful slap.

White readers and audiences have assumed for years that Prissy was simply lying when she said she knew all about birthin’ babies. I’m not so sure.

Prissy Knew Exactly What She Was Doing

Giving birth is risky. Even today, it’s one of the most dangerous things a woman can do—the sixth most common cause of death in women ages 20-34 in the United States. A woman giving birth in 1860 was 40 times more likely to die in childbirth than a woman today. Newborns died so often that their deaths often were not recorded. It looked like Melanie was going to have a difficult delivery.

What if Melanie had died? What if the baby had died? If Prissy had attended that birth, she would probably be blamed for anything that went wrong. She could get a vicious beating, be sold down the river—any number of horrible punishments, all at the discretion of the people who held her as a slave. I think Prissy made her choice out of fear, maybe fear for her life.

Fear Is Hard to Watch

Malcolm X wrote of Prissy’s scenes, “When Butterfly McQueen went into her act, I felt like crawling under the rug.” As a white person, I’ve always figured that the anger and humiliation Black people felt at the “comic” portrayals Hollywood put out was because it made all Black people look stupid. Now I think that’s only part of it. White people have had so much power, and used it in such brutal and tragic ways, that Black people have felt forced to appear incompetent to keep from getting hurt or killed. What we’re seeing is fear. It’s humiliating enough to have to act like you barely have enough brains to stand upright; worse that you have to do it from fear, and hideous to have people think your fear is funny.

I’m a white woman. It only just now occurred to me that white people thought this fear was amusing, that indeed they enjoyed seeing people in fear for their lives.

I’ve had plenty of opportunities to pick up on this. I first saw GWTW in 1967, on its first re-release. These scenes with Prissy were like a lot of stories I’d heard white people tell about Black people when I was growing up in the South. The tellers would imitate squeaks and squawks and accents. They thought these stories were funny, and that they illustrated the stupidity of Black people, or their tendency to lie.

I think Margaret Mitchell created a character she didn’t understand. This story was probably based on a true story handed down among white Atlantans who remembered the fall of Atlanta. I say a “true” story, in that it was the way the white tellers saw it. They could only see their own part in the story. I don’t know that Mitchell made any effort to get inside any Black person’s head, unless you count what she said about Prissy: the trip to Atlanta “was almost more than the brain in her little black skull could bear.”

This is part of an ever-lengthening series on “What Does It Mean to Be White.” Feel free to start with Part One.

The series includes my meditation on my own slaveholding ancestors. They probably lived as close to the rich white folks’ lives described in Gone With the Wind as anyone did. The legacy they’ve left me is probably not what they intended.

Next up, I’ll be looking at The Trouble With White Women by Kyla Schuller.