It’s Not About the Great Man 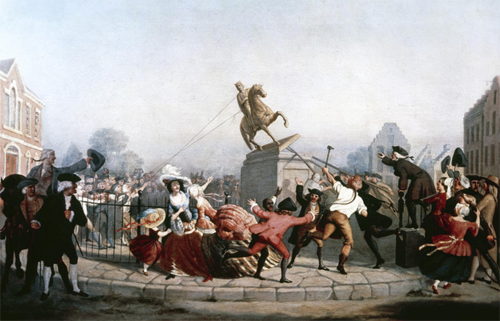 Encyclopædia Britannica’s online edition puts down historical fiction this way: “For the hack novelist, to whom speedy output is more important than art, thought, and originality, history provides ready-made plots and characters. A novel on Alexander the Great or Joan of Arc can be as flimsy and superficial as any schoolgirl romance.” That’s the first thing you see under “Types of Novel: Historical.” And it’s the first type of novel that’s listed—as though this was the most important impression a reader could have about any type of novel.

The entry goes on with a sniffy admission that historical themes have inspired some great novelists, and mentions Leo Tolstoy and War and Peace. Here’s one really important thing Tolstoy did with that book: he disputed the “great man theory,” an idea that had governed the writing of history ever since it began.

Historian Thomas Carlyle crystallized the Great Man Theory: “The history of the world is but the biography of great men.” We don’t often see history that way now—more on that later—but if you take Carlyle’s remark as a summary of how history was written up until then, he was pretty much right. Much of what we know about the ancient world, for example, has been taken from biographies of rulers and generals, and chronicles of military campaigns.

War and Peace features Tolstoy’s theory that the significance of great individuals is imaginary, that they are only history’s slaves realizing the decree of Providence. That’s a little further than most of us would take it. Tolstoy showed that war is about more than generals. It is about soldiers and civilians, men and women, nobles and peasants. If he’d written according to the Great Man Theory, his book might have been titled Napoleon Goes to Russia.

The prejudice against historical fiction is based less on artistic judgment than it is on snobbery, snobbery based on sex, class, and sometimes race. Yes, there is poorly written historical fiction. There are also poorly written thrillers as well as hack-work science fiction, romance, mystery, and literary work. People who pooh-pooh historical fiction often express a preference for biography, memoir, and history. You mean to tell me you’ve never seen a hatchet-job biography? A self-serving memoir? Biased history? Junk exists in every category.

No, the problem is that historical fiction is often about people who were “not important:” children in World War II France (All the Light We Cannot See) or depression-era Alabama (To Kill a Mockingbird); people held as slaves (Beloved, The Confessions of Nat Turner) or a poor hunchback who lives in Notre Dame cathedral. And, of course, it’s often about women.

Women didn’t figure much in the official historical record, but even the silliest sexist would have to admit that they’ve been present in every society in history.  They had lives, they had brains, they even had opinions, although they rarely had the chance to write them down. Women are central characters, protagonists, the point of view characters in historical fiction, just as they have been in many historical stories we do not know.

Still, for some people it doesn’t matter that The Scarlet Letter has been for a long time an American classic, and has formed many impressions of what life was like in colonial New England, or that Where the Crawdads Sing has now been on the New York Times best-seller list for 32 weeks. How can these books possibly be important, when they’re about women?

How History has Changed

Maybe historians decided to listen to Tolstoy. Maybe the civil rights movements of the 1960s made a difference. They forced historians, and many others, to pay attention to African-Americans, women, and other people previously considered “unimportant.”

In the United States, since the 1960s, more historians have started to look beyond the deeds of great men. They have looked more at formerly overlooked groups: women, slaves, farmers and industrial workers. Research since then has given greater texture to history. Historians now realize that the American Revolution was more profound than previously recognized. Historian Gordon Wood told me in an interview that it challenged people to examine the relationships between masters and servants, fathers and children, men and women. He saw, “a direct line from the questioning of the Revolution to the Seneca Falls convention in 1848.” The Seneca Falls convention not only launched the woman suffrage movement, it also helped drive the abolitionist movement.

History changes the way science changes. The underlying phenomena stay the same, but the way we look at them changes as we learn more. Take a look at the picture that accompanies this post. It shows a crowd in New York City pulling down a statue of King George III at the beginning of the American Revolution. In the past, historians would have focused more on King George than on the people at the bottom of the statue. Now we see the people in the crowd, people whose minds were changing about the way things ought to be. People who might make good characters in historical fiction.

In spite of the disrespect, historical fiction has maintained a strong presence in the publishing market, at least according to literary agent Kate Burke: What’s Hot in Historical Fiction?

Want to read the latest in historical fiction? There’s an excellent 2019 list on Goodreads.

I’ve written before about misconceptions about historical fiction: They’re Not All Bodice-Rippers, and about how it helps us understand history: Making it Real with Historical Fiction.

This is Part 3 of a series on Enjoying Historical fiction. Earlier parts: When History is Fiction, and A Different World.

And, of course, there’s my own historical novel, The Monk Woman’s Daughter. The lead character is the daughter of a notorious 19th century woman, Maria Monk.

Just for the record: the picture that accompanies this post is a little bit of historical fiction. King George’s statue showed him in a toga, without a crown. The crowd at the bottom did not include elegantly dressed ladies or prosperous-looking men. Eyewitness accounts said the people in the crowd were “lower sorts,” including soldiers and sailors.

Previous Next
May 2nd, 2019|General, History and Historical Fiction|0 Comments