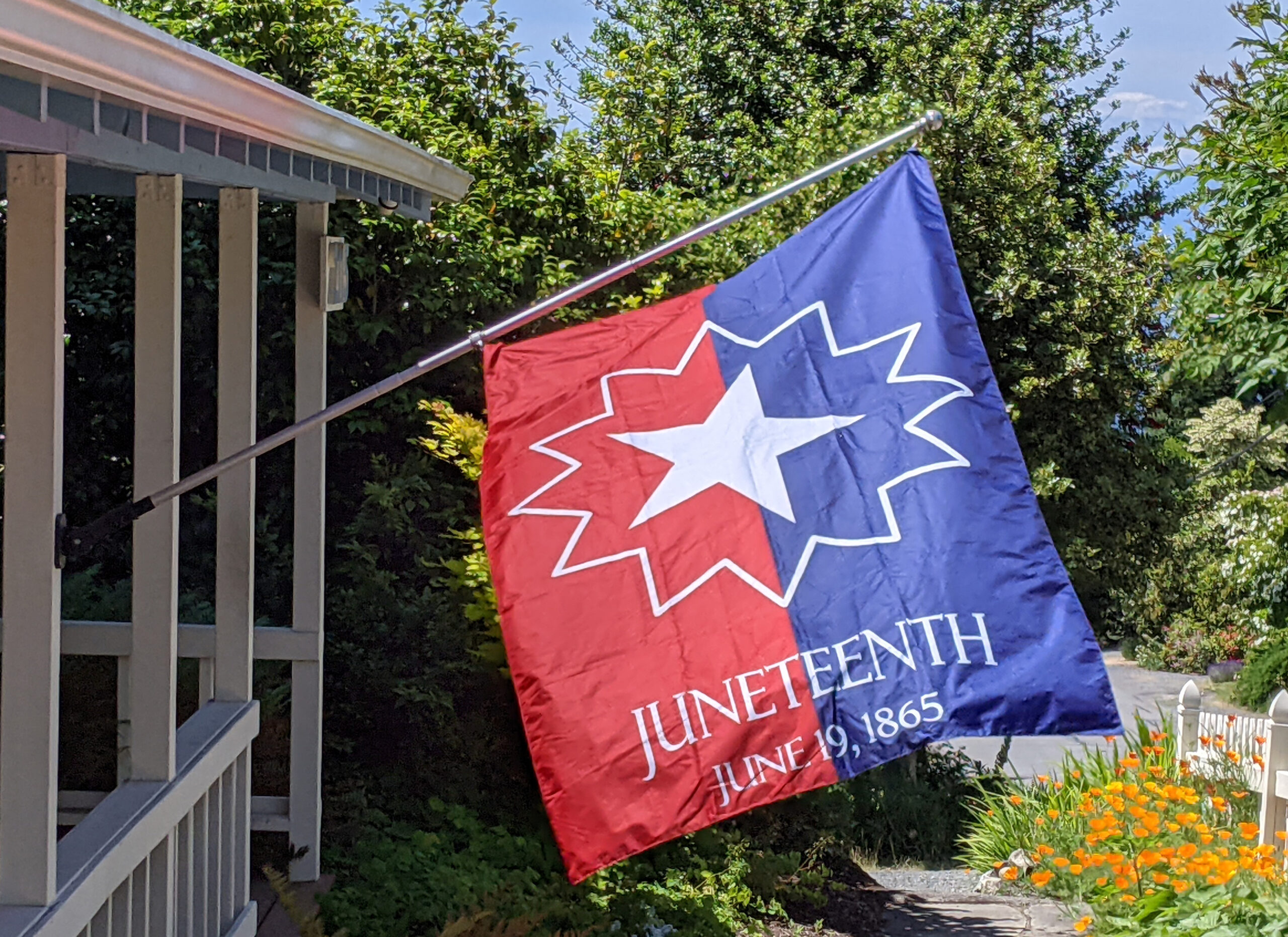 Juneteenth commemorates the day that enslaved African Americans in Galveston, Texas, learned that they were free. The Emancipation Proclamation had supposedly freed them two years earlier, but Texas had been held by Confederate troops past the end of the Civil War. It wasn’t until the Union Army got to Galveston that the federal government could make emancipation stick.  General Gordon Granger proclaimed freedom for the enslaved people of Texas on June 19, 1865. He used clear, plain language: “All slaves are free. This involves an absolute equality of personal rights and rights of property between masters and slaves, and the connection heretofore existing between them becomes that between employer and work for wages.”

That last part, of course, didn’t quite work out the way General Granger might have thought it would; there would be another century of sharecropping, bonded labor, Black Codes and Jim Crow keeping African Americans in bondage, particularly in the South. Still, it was a start. African Americans began celebrating it right away, and have continued to this day.

There are other celebrations marking the end of slavery. One of the most distinctive is Watch Night, which most sources say was first observed on New Year’s Eve in 1862, waiting for the Emancipation Proclamation to take effect at the stroke of midnight January 1, 1863. It’s a solemn observance, often held in a church. Others have been marked with parades, barbecues, and other family gatherings.

There have been plenty of media features this week about how to celebrate. The Seattle Times, for example, has a short list of traditional foods, but a long list of local Black-owned eateries, plus recommended podcasts, such as NPR’s Code Switch, TV shows and movies by Black creators, and an excellent list of books by African American authors.

Are you getting that if White Americans observe this holiday, we should do so respectfully?

It’s Not Our Holiday

Michael Harriot writes in The Root, “Before hopping on the Juneteenth bandwagon, you first realize that you have no say in driving the narrative about this special day.” And some of us get it. One of my nieces posted on Facebook, “If you’re going to observe Juneteenth as a white person, paying reparations is not going to come back to haunt you when you run for office / apply for a job, but dressing up in African garb and getting drunk in a bar definitely will.” Before you decide nobody would ever do that, think about the way many white Americans celebrate Cinco de Mayo. “Harriot warns, “Don’t disrespect Juneteenth by wearing kente cloth or cornrows. And please don’t attempt to celebrate by singing slave songs.”

And before you say nobody would ever do anything remotely like that, let me introduce you to a nineteenth-century white American composer who provides an object lesson in how embarrassing well-meaning folks can be when they try to appropriate Black culture.

Henry Clay Work was an abolitionist and composer active during the Civil War and afterwards. You may think you have never heard his song “Kingdom Coming”, but I bet you have. (Go ahead. Click on the link where it says “Kingdom Coming.” You’ll recognize it in a few bars. ) And I also bet you’ve never heard the words. “Kingdom Coming” celebrates the end of slavery from the perspective of the newly freed, using what Work fancied to be an African American dialect: “De massa run, ha ha! De darkey stay, ho ho! It mus’ be now de kingdom coming, and de year ob Jubilo!”

Now you know why you’ve never heard the words.

But if you watched Ken Burns’ Civil War, you heard the tune whenever Ulysses S. Grant on screen. If you’ve watched just about any Warner Brothers movie about the Civil War, you heard it in any scene showing the triumphant march of the Union Army through the South or former slaves celebrating freedom. Cartoon characters have whistled it. Judy Garland sang the tune with cleaned-up words in Meet Me in St. Louis. It’s a great tune. If it only had decent words, it would be an immortal American song.

It doesn’t. The words make us cringe.

So let’s lay off the cultural appropriation for Juneteenth.

White Americans are part of that history, of course. We just don’t have the role of the good guys. Many of us learned that Africans were slaves, but we don’t emphasize that it was white people who imported them and white Americans who have oppressed them for more than four centuries. We need to learn, and recognize, and own that part of our history.

It probably doesn’t hurt to learn about Juneteenth. We could spend a little time appreciating African American culture, heritage, endurance, humor. It might do our white American souls good to listen to some jazz, or rock and roll, or ragtime, hip-hop, or any of the rest of the outpouring of musical genius that has come from African Americans. They have a worldwide cultural influence far out of proportion to their numbers. Read a good book by an African American author, or appreciate any of the many forms of creative work African Americans have excelled at. Be grateful for their gifts, even as we work toward making this country a better place for them—and us—to live.

President Joe Biden signed into law legislation declaring Juneteenth a national holiday. (How it passed the Senate I do not yet know.) Here’s The New York Times article.

Henry Clay Work was actually a pretty interesting guy. He and his family were all abolitionists. In fact, their home was a stop on the Underground Railroad, and his father went to prison for that. His heart was obviously in the right place, even though his desire for dialect was misplaced. He also wrote “My Grandfather’s Clock,” which gave the term “grandfather clock” to the language. Here’s a version by Johnny Cash, with extra rhythmic interest by The Tennessee Three, his backup group. His most famous song in his lifetime was “Marching Through Georgia,” from the point of view of Union soldiers on General William T. Sherman’s March to the Sea. The chorus was, “Hurrah! Hurrah! We bring the Jubilee!” meaning the liberation of those enslaved. Sherman reportedly got heartily tired of the song, since it was played just about everywhere he went. It was even played at his funeral. It is a favorite of brass bands around the world, but it was, of course, thoroughly detested in the old Confederacy and especially in Georgia. When Georgian Jimmy Carter was president, the White House Protocol Office had to issue a caution to governments and brass bands around the world that the song was “inappropriate.” Carter was reportedly hazed when he was a plebe at Annapolis for refusing to sing it.

This post is part of a series, “What Does It Mean to Be White?” Part 1 is here.