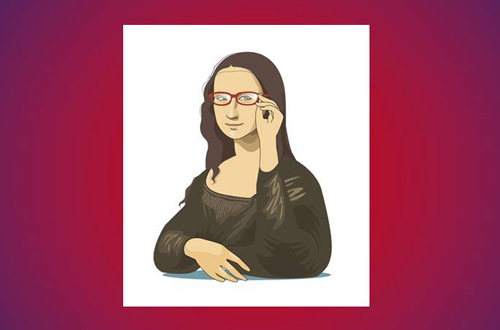 Leonardo da Vinci made himself an expert on a lot of things, and one of them was optics. He thought that submerging your head in a bowl of water could improve vision, and he had a man do that just to see if he was right. He was.

To make it usable, of course, the test subject would have had to hold his breath while Leonardo invented the aqualung. Then he’d have to spend the rest of his life under water. So–not practical.

Leonardo then tried a glass lens, with a funnel to pour water into it. Not practical. Not even fashionable.  He went on to something else. I’m pretty sure he first told his assistant he could take his head out of the water.

Leonardo wrote his findings down in his 1508 Codex of the Eye.

I probably would never have thought about this if I hadn’t been taking my contacts out after a visit to Leonardo’s last home, the Château du Clos Lucé in Amboise. He was invited to France by King Francis I when he was old and past his prime as a painter. The king apparently admired Leonardo solely because of his great genius, and he gave him a place to think and draw and tinker. Leonardo lived there for the last three years of his life, dying in 1519.

We spent a pleasant few hours at the chateau in the Parc Leonardo da Vinci. The museum is beautifully furnished and lovingly researched. It is a joyous place, filled with light, and surrounded by lush gardens. It features studies of his paintings, a living workshop, and Leonardo’s last laboratory.

Four rooms in the basement are devoted to his inventions and his work as an engineer.  They feature forty wooden models, produced by IBM from Leonardo’s original drawings, using materials of the period. He’s credited with thinking up the first army tank—although it’s clear that his tank would have been more of a threat to its occupants than to anyone else. Visitors can also see how his swing bridge worked (very well) and enjoy his proto-helicopter, which didn’t work so well. He invented the humble ball bearing, which is in every machine today that has a rotary motion.

The museum provides a stimulating trip through a remarkable mind.  That evening when I took out my contact lenses, it occurred to me that he would have been thrilled and intrigued to discover these tiny curved pieces of plastic that ride on the surface tension of the moisture in a human eye.  I didn’t know at that point that he’d  tried to figure out how to make contact lenses.

Glasses to Stick on Your Eyeballs

One intriguing thing about the development of contact lenses is the number of great scientific minds who tried to create them—Sir John Herschel, the polymath astronomer and son of William Herschel, and Rene Descartes, of “I think, therefore I am,” fame. My theory about this is that scientists and other thinkers lose track of their glasses just like the rest of us, and the great minds thought the obvious practical solution was to have them stuck to your eyeballs.

The invention of contact lenses that were actually useful for most people had to wait for the evolution of lightweight plastics.

Great ideas come from great minds. So do a lot of lousy ones. Thomas Edison famously said that he hadn’t failed, he’d just found 10-thousand ways that didn’t work.  Paul McCartney has remained creative for more than 50 years. Magical Mystery Tour  and Liverpool Oratorio were not great critical successes, but he didn’t go back to doing what he was doing before. He’d try something else. Just last month, September 2018, his album Egypt Station charted at Number One.

Leonardo had faith enough in his own creativity that he carefully documented his ideas. His curiosity overwhelmed any worries he might have had about looking foolish. He moved ahead, always seeking, always discovering, and is now considered the greatest genius the world has ever known.

He didn’t know that, of course. His notebooks also show some sorrow that he just couldn’t do everything he wanted to do.  A widely quoted story says Leonardo’s last words were, “I have offended God and mankind because my work did not reach the quality it should have.”

Don’t we all feel that way?  At least sometimes?

Still, you have to think he found joy by going where his curiosity led him.  Finding things out, learning, puzzling things out for ourselves—these are things that bring joy to the learning machines we call human beings.

I think now about how delighted Leonardo would probably be if he could come back today and see all the discoveries we have made, all the places our curiosity and experimentation have led us.

I think the first thing he’d want to do is try contact lenses.

Michael J. Gelb’s book How to Think like Leonardo da Vinci: Seven Steps to Genius Every Day is still delightful reading and a lot of fun exercises, even though it’s been 20 years since it was first published. A .pdf  outline and booknotes is also available online, but I don’t think it’s as much fun as the book.

Want to know more about the evolution of contact lenses? There are several interesting sources:

If you’d like to take a look at more of his inventions, check out www.leonardodavincisinventions.com.