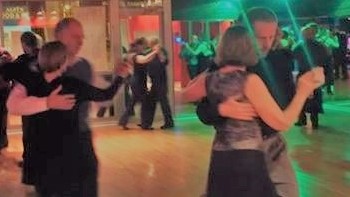 I want to live to be 100, with my brain and body working as well as possible.

Dancing will help with that. Need a scientific study? I turned up a bunch just doing a search on “dancing improve cognition.”

The most striking study was one from the New England Journal of Medicine that analyzed several different forms of recreation for a group of 469 adults over a five-year period, and that said flatly, “Dancing was the only physical activity associated with a lower risk of dementia.” Dancing not only beat out the other physical exercises, it also did better than purely cognitive exercises, such as doing crossword puzzles at least four times a week.

That’s good news for Gunnel Clark, who does Scandinavian folk dancing three times a week. Gunnel Clark immigrated to the U.S. from Sweden 1965 and worked for about 30 years as a carpenter and cabinetmaker.  About 2 years ago, she accepted a friend’s invitation to join a Scandinavian folk dance group, partly because she had good memories of those dances from her childhood.

“Scandinavian folk dancing is pretty complex,” says Gunnel, “ and most of it very vigorous. There are 5 basic dances: hambo, vals, polska, snoa and schottis. All the dances have many variations, developed over the years in small communities all over Scandinavia.” She dances mostly at The Skandia Folkdance Society in Seattle.

Gunnel received a diagnosis of Parkinson’s in February of this year. Parkinson’s expresses in many ways, and can bring dementia. Gunnel’s conversations with her physical therapist, and her own online research, led her to conclude that dancing was probably her best bet to hold back the effects of Parkinson’s. A recent checkup showed that her disease has not progressed in the last few months.

Catherine Crain has been an avid tango dancer for about 12 years. She and I attended a conference together a couple of years ago, and I was fascinated when she was able to find a tango dance in a strange city. She says tango is very portable—she’s found places to dance all over the United States and in Paris, plus she’s spent considerable time in Buenos Aires learning more.

She says tango was very challenging at first—and she loves a challenge. Now she enjoys, “the meditative quality of it and the connection with a partner and with the music.  It is almost a spiritual experience.  You move as if you were one body.  It is very creative – more creative than any other partner dance I’ve tried.  There is no true “basic step” –  you and your partner interpret the music together and there is endless variation .”

As befits the retired college instructor she is, Catherine sent me sources and study materials:  “Chan Park wrote a book called Tango Zen,” and there are workshops at www.tangozen.com/ based on this approach to tango.”

Catherine told me about two dance teachers in the Seattle area who offer classes or help to people with physical disabilities or neurological conditions: Max Kepler teaches classes for people with Parkinson’s disease. Gabriela Condrea works with people with other kinds of disabilities; one story recently ran in The Seattle Times.  Condrea has also written a book, When 1 + 1 = 1: That Impossible Connection.

And when Catherine was in Buenos Aires, she attended a workshop on “Tangoterapia” which was all about uses of the tango in therapeutic contexts.

One last thing she wanted us to know about tango: it’s not what you see on Dancing with the Stars. She has learned its fascinating history, and says, “It’s the ‘jazz’ of Argentina.”  Here’s a clip of what she called “real tango.”  It features Alicia Pons who is an expert tango teacher, and Catherine says, “She’s about my age.”

So look for me on the dance floor. I won’t be the best one out there, but I’ll be dancing as long as I can.