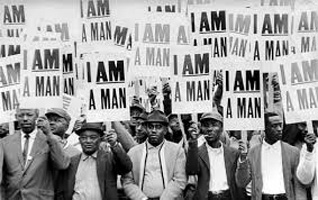 Does a dues check-off sound like something obscure and unimportant to you? It’s in the news today, partly because this is the 50th anniversary of Dr. King’s assassination, and partly because there’s a lawsuit headed to the Supreme Court aiming to kill off that part of his legacy.

With a dues check-off, union dues are automatically taken out of a worker’s paycheck, whether the worker wants to be a member of a union or not.

The Way It Was

Dr. King came to Memphis because of a strike of sanitation workers who wanted a union. I grew up in Memphis in the ‘50s and ‘60s,  and I remember the garbage workers from my childhood—slow-moving, silent black men, who came into the back yard with metal tubs.  They emptied our garbage into the tubs, put the tubs on their heads, and carried them out to an old truck.

When I was older, I learned that these men went to the city dump every morning to see if there was work for them that day; if there wasn’t, they were sent away, and didn’t get paid.  There was no shelter for them at the dump: no way to get a cup of coffee or even use a toilet. They were summoned to work by a big bell—yes, the kind used on plantations.  The winter before the garbage strike, two men were crushed to death in the maws of garbage trucks.  The city said they had used the truck improperly, which was likely, since the trucks were new; the city said that the men were standing in the wrong place, which they probably were; and that they were probably drunk, which they may have been.  But it focused the feelings of the men who picked up the garbage; they felt that they were garbage men in the sense that they were garbage.  That’s why, when they went out on the picket lines, the signs they wore said, “I AM a man.”

They wanted a union, and the American Federation of State, County, and Municipal Employees was working to organize them.  The city agreed to some pay raises and safety measures.  The sticking point was a dues check-off. The mayor and the city council took the stance that a check-off was illegal, since Tennessee was and remains a Right-to-Work state, and such a system was against the law. The Tennessee state legislature had hurriedly passed a bill specifically prohibiting a dues check-off.  But the workers, and Dr. King, wanted that dues check-off, because they knew that without a check-off the union would be ineffective. They wanted that union, and, more importantly, they wanted simple respect for the workers.

After the assassination, the Memphis City Council found a way to approve the dues check-off, allowing it to be set up as a credit union transaction, “a matter exclusively between the employees and their credit union.” A waffle, to be sure. The political ins and outs of this are skillfully chronicled in Michael K. Honey’s book, Going Down the Jericho Road: The Memphis Strike, Martin Luther King’s Last Campaign.

I was a senior in college that spring. I finished my senior year and graduated, finishing most of the semester in a city under martial law, with most of the underclassmen gone from an almost deserted campus.  I left Memphis that fall, to begin graduate work in London; during my first year in London, my dad got a job at Yale.   I came back for about 6 weeks in 1969 to help my family pack up and move to Connecticut, and didn’t go back to Memphis for 19 years, until 20 years after Dr. King was shot.

When I went back, I was doing television production for the U.S. Information Agency. I was shooting part of a series on Americans and their jobs, plus a piece for the 20th anniversary of the King assassination.  I had suggested that I could do a piece on how Memphis had changed—if it had—and profile one of the garbage workers.

First stop was the city dump, at 5:30 am. (Television news is so glamorous.)

At the dump, the men waited in shelters—clean, warm places with bathrooms and vending machines.  The bulletin boards carried news of union functions; in the intervening years, as the police and hospital workers had unionized, they had joined the union of the garbage workers.

I talked to one of the men who had been in the 1968 strike.   I talked to him about his work, and he told me that he was proud to do what he did.  It was necessary to keep things nice, he said, and if a man isn’t proud of what he does, then he isn’t proud of his livin’.  I remarked that the union seemed strong and well-established, and asked how important it was to them, and to him, that Dr. King had been in Memphis to help out in their strike when he got killed.

Because Martin Luther King came to Memphis and laid down his life for those workers, they got the simple respect that they sought—from themselves and from others.  He changed their lives profoundly, and I think he could not have done it with a lesser sacrifice.  I think it took that powerful an event to move the civil rights revolution forward, that without it, change would have been stalled forever on legal issues such as a dues check-off.

But it’s not like the support of public unions began to soar. Not even close. We’ve had at least 30 years of state and national policies to weaken labor unions.

The use of right-to-work laws to keep public sector workers weak is bearing bitter fruit now. Teachers’ strikes have erupted in West Virginia, Kentucky, and Oklahoma, states that have kept the unions weak and grossly underfunded their schools.  Randy Weingarten of the American Federation of Teachers, in an NPR interview on the strikes, said, Teachers are seeing that despair cannot be a strategy.” And she brought up a case that’s before the Supreme Court: “[B]ecause of what the Supreme Court is doing in the Janus case, you’re going to see more and more and more of this because the states that have collective bargaining, they work this out at the bargaining table. But the states that don’t, like Oklahoma or West Virginia, they’re going to get more and more political.”

Mark Janus works for the State of Illinois, and, as such, is covered by the state’s agreement with AFSCME—the same union Dr. King went to Memphis to support. Mr. Janus is required to pay a fee to the union, even though he doesn’t want to be a member.  This has been specifically allowed under US labor laws, so that disputes can be worked out in an orderly fashion.

Many observers think that because this court is so conservative, the fees may well be declared illegal. The result may be the effective collapse of many unions, especially public-sector ones.

Unions are not perfect, any more than any other human institution is perfect. But they are better than the despair, the disorder, and the violence that often comes in their absence, or in cases where they are so weak that they might as well be absent.

This is only one of the lessons that Dr. King offered us. Like many of his other lessons, it is a wise and necessary one, and one we must not forget.