Meditation at a Traffic Light 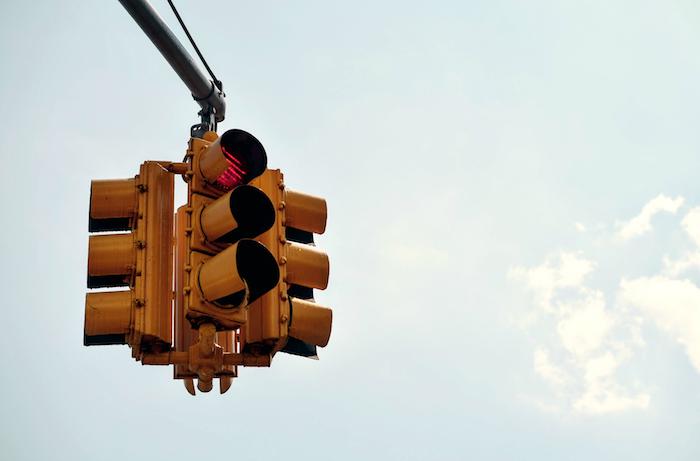 Put down the latte,
Get off the phone,
Stop bein’ snot-tay,
You’re not on this road alone.
You’re misbehavin’
That’s why I’m ravin’ at you.*

The light has been green for 10 seconds. If I were still living on the East Coast, I would have been leaning on the car horn for nine and a half. But I’m in Seattle, where that’s rude and possibly illegal, and so I’m watching my life melt away while the person ahead of me ignores a perfectly good green light.

Sigh. Yes, I’m impatient, but I hate to be rude. Used to be when people sat daydreaming at a green light, you could just roll forward a little bit, and they’d see some motion in a mirror, and the distraction bubble would pop, and they’d go.

Not now. Not with people on their cellphones. I could probably smack this Camry’s rear bumper, pop the trunk, crawl into the passenger compartment, fix my lipstick in the rear-view mirror, and be back in my own car with the seatbelt buckled before the Camry moved.

Beep. A polite little beep. I wish I had a car horn that had a polite little tweedle for people stopped at greenlights, and a foghorn for real emergencies.

The driver ahead looks back at me, and then, without glancing up at the light, LOOKS BACK AT HER PHONE. In her own little cell-induced bubble. What part of our animal consciousness makes us think that we’re alone and invisible when we’re in our cars? We must think that, or we wouldn’t be picking our noses while we’re in our cars, surrounded by glass as much as if we were in a store window. And you don’t often see people standing in store windows picking their noses. Unless it’s performance art.

Maybe you’ve seen the YouTube video about the brilliant lesson some Belgian driving instructors taught in 2012. They told young people taking their driving tests that they had to be able to use their cell phones while driving.

We all know about the texting-while-driving problems. We know driving while intexticated causes 23 percent of accidents, but we don’t seem to care. So how about cranking up the punishments? How about if you’re a convicted texter-while-driving, you either have to give up driving or your cell phone for six months? Or the insurance company puts you in the high-risk pool so you can’t afford insurance? Public shaming? Nah. What would work? Washington State has passed a no-cellphones-while-driving law, but it doesn’t go into effect until 2019.

The driver comes out of her trance. The Camry moves. I do, too. The light turns amber.