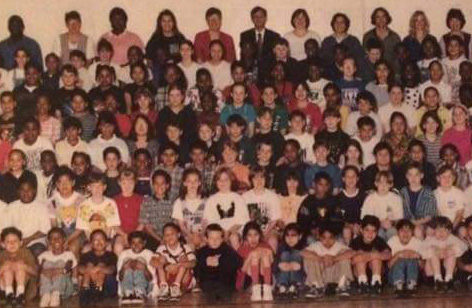 They may think it’s important for their children to be educated alongside folks who “look like them,” and who are more likely to have higher test scores, but I know two white people who think they greatly benefited from having schoolmates in a wide variety of colors and ancestries.

As I noted last week, our son and daughter, Ed and Kat, attended public schools in Silver Spring, Maryland, first grade through high school, during the 1990s and early 2000s. Silver Spring is a very diverse area, and the downtown area, where we lived, has had high immigrant populations for more than 50 years. Part of Kat’s 5th grade class picture accompanies this post; she’s in the fourth row down, the blonde girl in black looking seriously at the camera.

I remember a display in the front hall of East Silver Spring Elementary School. It showed that the kids in that school spoke 34 different languages at home. Thirty-five percent of the kids spoke English at home, 33% spoke Spanish. Coming in third, at about 20%, was Tigrina, or Tigrinya, which is spoken in Eritrea and northern Ethiopia. At that time, Eritrea was separating from Ethiopia, and the civil war drove large numbers of refugees to the United States. My daughter Kat writes, “Diverse schools helped me realize that there were conflicts I knew nothing about, a friend of mine who was Eritrean was adamant she not be mistaken for Ethiopian; I didn’t understand it but I was careful not to mix up the two countries again.”

I remember thinking that mixture of cultures was intriguing and fun. I was really excited about the first event that involved potluck, although I have to say my eagerness was a little dampened by the directive that the food had to be from your country of origin. That meant that I got to pick food from Germany and the British Isles, even though all my ancestors had been in this country for more than 200 years. I would really have liked to bring, say, Grammie’s New England blueberry cake, and I felt like I was probably limited to oatmeal and bratwurst. Bratwurst is delicious, but it’s also pork, which puts it off-limits to Muslims, Jews, and vegetarian cultures. I think I made scones. They were okay, but not nearly as exciting as the samosas and chicken adobo and injeras with delicious stews that other parents brought.

It wasn’t all fun and potlucks, though. As they progressed through school, and particularly into their majority-minority high school, taking American history with African-American schoolmates was often uncomfortable. My son Ed writes, “When we first started learning about colonization and later the Civil War, slavery became a hot topic. For a few months afterwards, a few black classmates of mine would demand that I apologize for slavery every time they saw me, as though I was directly responsible. I apologized for it numerous times, not knowing whether or not my ancestors were in fact slave owners and what they did to those slaves. But I felt awful that it had happened to all of those people, and the fact that my classmates felt so angry and upset over everything we had learned about how whites treated blacks for all of those years leading up to and after the Civil War. The more and more I learned about what it was and how they were treated, my guilt deepened. I also didn’t know what my classmates wanted me to do about it.”

We talked about it at home, and I explained that we had a mixed heritage when it came to slavery, as do many white people whose roots go way back in the United States. On one hand, we are related to the founder of Storer College, established right after the Civil War to educate men and women of color. On the other hand, some of our relatives were wealthy slaveholders. While we haven’t had either the slaves or the wealth, we do share the guilt many white Americans carry for slavery.

When he was a young boy, Ed had been fascinated by the Civil War, and we made several visits to the Gettysburg battlefield. He can probably walk you through the battle to this day. He also writes, “As I grew older, I began to read more about the Civil War, and I began to understand more and more just how wrong slavery truly was, and how wrong it was to fight for the right to own/mistreat other human beings as though their existence didn’t matter any more than farm animals. I also gained respect for the Underground Railroad, Frederick Douglass, and the strength that black people had to maintain their humanity while the rest of the nation continued to lose its own.”

Kat’s experience was similar. She writes that diversity in her schoolmates, “. . .helped me amplify my uninformed white guilt by a factor of bazillion. I didn’t have the language or emotional skills to handle the realizations that my ancestors perpetuated and benefited from slavery. I didn’t know how to not internalize the Native Americans being slaughtered and isolated from their lands. That guilt would occasionally turn around into bad attitude. . .A lot of those bullshit moments were cured with some knowledge and a lot of humility, but not until much later.”

He’d already encountered one area of guilt in fifth grade, when they talked about World War II and the Holocaust. When his Jewish classmates learned about his German heritage, Ed writes, “I became responsible for Nazi Germany and the Holocaust. I again apologized for everything that had happened, but still was confused that I was being blamed. I did not (and still do not) support Nazis and Fascists, nor do I apologize for the German portions of my bloodline.” Once again, he came home and talked about it, and learned that all his grandparents and great-grandparents had been Americans at that time, and that his paternal grandfather served in the U.S. Army. “Both occasions did leave me apologizing for something I had not done and still felt guilty for, but it did result in me learning more about my ancestors. Harsh way to learn, but I learned.”

My two resident experts had a lot more to say—about their discovery of the richness of Hispanic culture, the effect of diversity in their school curriculum, whether they would send their children to schools where white kids are in the minority, and the infamous “family tree” assignment. So there will be more on that in my next blog.