Mythology and the African-American Cowboy 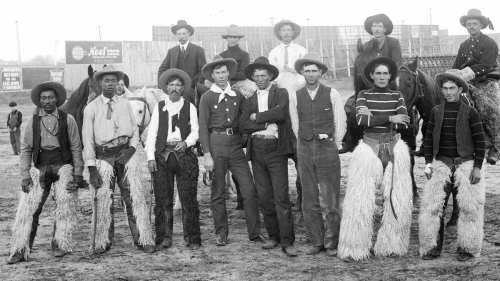 The Heyday of the Cattle Drives

Herders all over the world have driven animals to market for centuries. In the United States, the biggest cattle drives took place after the Civil War, and kept going until the mid-1880s. They mostly went from Texas to Kansas, where the railroads would take their stock to the big cities in the east. In slavery times, enslaved African-Americans looked after cattle and did the dangerous work of breaking wild horses. It makes perfect sense that after slavery they kept doing it.

So why do we think all cowboys were white?

The movie industry was born in the early years of the 20th century.  American culture was actively creating a more segregated society, with the institution of many of the Jim Crow laws and customs that endured through the Civil Rights movement of the 1960s. The 1896 Supreme Court decision Plessy v. Ferguson okayed separate public facilities for people of different races. It took more than 50 years for the famous phrase from the case—“separate but equal”—to be seen for the cruel joke it was. Meanwhile, Hollywood was making movies such as Birth of a Nation, which glorified the Ku Klux Klan and showed African Americans as stupid and evil. Hollywood movies about cowboys used all-white casts, just like most of the other movies.

We could consider, maybe, that Hollywood movie-making developed out of the tradition of the theater. For centuries, theater had used the people on hand to portray anyone, no matter what ethnicity the original character was. I don’t think Shakespeare got Italians to play Romeo and Juliet, or a Moor to play Othello. He didn’t even get a Jew to play Shylock. (I can state that with certainty because it was illegal for Jews to be in the general population in England from 1290 until 1753.) It’s possible Hollywood producers bleached American history just because they didn’t know any better. Or they didn’t want to think outside the accepted way of doing things.

Between the end of the big cattle drives and the growth of the film industry, the Wild West shows came and went. They featured many of the same events we know from rodeo, a sport that began as friendly competition among cowboys long before the advent of the big cattle drives. Some black cowboys who had worked in the roundups found fame in rodeo and in the Wild West shows. Jesse Stahl was a popular bronco rider in the nineteen-teens and 20s. That was in the face of obvious discrimination—sometimes he and the audience would know that he had given the best ride, and the prize would go to someone else. It may have been to show his objection to such treatment that he sometimes rode a bucking horse backwards.

The picture that accompanies this post was identified only as Nebraska cowboys when I found it online. It’s clear to me, though, that this is a picture of cowboys who were in a Wild West show. Their good clothes and the fancy chaps some are wearing hints at that. Moreover, I think it’s the cowboys in the 101 Ranch Wild West show—because the cowboy on the left is Bill Pickett.

Pickett had worked as a cowboy until about 1900, when he joined a show and introduced bulldogging, an event in which a cowboy leaps from a horse onto a running steer and wrestles the animal to the ground. Pickett called it bulldogging because of the technique he used, similar to what dogs had done in bull-baiting; he sank his teeth into the animal’s upper lip to subdue it. Pickett traveled widely with the 101 Ranch show, notably to Mexico City, where he used his technique on a fighting bull. He even starred in a movie, The Bull Dogger.

Both men died in the 1930s. When the Cowboy Hall of Fame opened in Oklahoma in the 1950s, they were not recognized. In the 1970s, after the name had been changed to National Cowboy Hall of Fame and Western Heritage Center, they were recognized. In 1993, the U.S. Postal Service issued a series of stamps commemorating Legends of the West, including Bill Pickett. Only the picture they used wasn’t Bill’s. It was a picture of his brother Ben. The stamps were corrected and re-issued.

There has been some “correction and re-issuing” going on in mass entertainment in the last 30 years or so. For example, Joshua Deets, the African-American character in Larry McMurtry’s novel Lonesome Dove, was based on Bose Ikard, who worked for Charles Goodnight of Goodnight-Loving Trail fame. Danny Glover played him in the series. The epitaph for Deets is based on what Goodnight said of Ikard. “Served with me four years on the Goodnight-Loving Trail, never shirked a duty or disobeyed an order, rode with me in many stampedes, participated in three engagements with Comanches. Splendid behavior.”  The Cowboy Hall of Fame inducted Ikard in 1999—after the TV series ran.

The real Lone Ranger may have been a black man named Bass Reeves. Reeves had an extraordinary story of his own, only recently given wide circulation.

Other Items of Interest

Hollywood producers could have found some black actors to play cowboys. They did for Harlem on the Prairie, called “the first colored cowboy musical” when it was released in 1937. I’m a little ambivalent about recommending it. Herbert Jeffries, called “The Sepia Singing Cowboy,” later told reporters he was not African-American at all. He said he had “passed” so he could get jazz singing gigs. Still, there were plenty of men of color riding the horses, and they could have been offered other movie work.

I found some good books for kids while I was researching this: The Black Cowboys, by Gina De Angelis; Reflections of a Black Cowboy, books 1 and 2, by Robert Miller, whose uncles were black cowboys;  and Black Cowboys, part of the Western Expansion series, by Ryan P. Randolph.

I’ll be writing more about cowboys, and recognizing that there were many Mexicans/Hispanics and Native Americans among them. I was looking at the picture that accompanies this post. Besides the two men of visible African descent, I could certainly see some who “looked” Hispanic or Native American. It’s a little irresponsible to pick them out for publication, but you may certainly do so for your own amusement.