No Place To Go 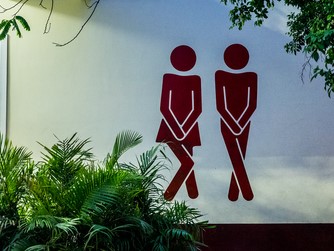 “Dancing in the Streets” has a whole new meaning when there aren’t enough public toilets.

As many of our cities gentrify, the public toilets seem to disappear. Not a good plan. Let’s take the stereotypical millennial, who grew up in the suburbs where nobody walked anywhere. That  person stereotypically wants to live in a “walkable” urban area.

That means you want to walk to places rather than drive a car. And you probably don’t even want to own a car.

When you were a kid in the suburbs who went everywhere in a car, you whined to your parents when you needed to pee, and they drove rapidly to someplace where you could use a bathroom. Usually.  (Maybe you have a family story about this.)

No Place to Go

If you’re walking in most major American cities, you are rarely within easy walking distance of a public restroom.  Sure, you can go into a coffee shop or fast food place, make a guilt purchase of a soda or cup of coffee, and use their facilities.

What if they’re closed?

What if you don’t have any money, or don’t look particularly presentable?

What about children? The elderly?

What if you’re homeless, without even the proverbial pot to piss in?

Mona Chalabi wrote last year about the fact that there were only three new public toilets built in New York City in the previous seven years. There were more than 95-thousand citations for public urination in only part of that time. She noted that she had enough money that she could go into Starbucks or McDonalds, but, “since when did Starbucks and McDonald’s become the official provider of places to pee? Leaving it to private businesses to adjudicate basic sanitation rights is perverse.”

Things Can Get Nasty

What’s more, we’ve only had a short time in human history when many of the world’s major cities have been relatively clear of free-range filth. If you’re one of those folks who has a romantic yearning for living in a previous century, you might want to think of how many people died of typhoid, typhus, cholera, and all kinds of nasty diseases because streets (and homes) were so filthy. When I was researching my novel, The Monk Woman’s Daughter, it became graphically clear to me what the streets of New York City were like in the 19th century. They were ankle-to-knee deep in a permanent “dust,” which became sludge in the rain, and which was, frankly, dried-up human and animal excrement. The famous dance scene from Singin’ in the Rain would have been way different.

London was just as bad, or maybe worse, before it cleaned up its act. The 2015 book Dirty Old London: The Victorian Fight Against Filth really dug deep on this subject, and will give you a whole new perspective on Victorian novels. The author, Lee Jackson, runs an extensive web site, www.victorianlondon.org, rich in information on London topography, ephemera, genealogy and burial grounds.

The ancient Romans, for all their vaunted sanitary engineering, didn’t quite get the public health aspects of toilets. Shared, um, accessories often meant that they spread parasites through their toilets, but at least they weren’t pooping in the streets. As much.

That’s not to say there aren’t problems with public toilets. They sometimes become centers of drug traffic and sexual assignation, and sometimes sheer social mayhem—as with China’s Toilet Revolution, begun in 2015, and partly derailed in Beijing by large numbers of elderly women storming the place and stealing the toilet paper.

Here in Seattle, where technology is queen of the Emerald City, there was a disastrous experiment with self-cleaning toilets. Five were installed in 2003, to much fanfare (and to the tune of 5-million dollars,) and quickly became centers for drug use and prostitution. In 2008 they were sold on e-Bay for  $2,500 apiece.  Since then, there have been periodic announcements about new restrooms, but the 2017 Google map of public restrooms shows only eight in downtown Seattle, and those are only open during the day.

Seattle’s problem becomes more acute when we realize that this city of about 750,000 has at least 11,000 homeless people in it. If you don’t put a porta-john by the tent cities, what do you think happens?

What have we learned from history if we just ignore a basic fact of all human existence? Something we share with all the rest of the animal kingdom?

Everything has to go somewhere.

And we all gotta go when we gotta go.

When I set out to write this post, it was mostly to call attention to the lack of public restroom facilities, and the fact that it’s something we really can’t ignore. In my research I discovered there is a World Toilet Day (November 19) and its web site had a whole lot of information about hygiene all over the world.

I also discovered in my research an organization called PHLUSH, (Public Hygiene Lets Us Stay Human), which has some great resources on its web site, including a free downloadable public toilet advocacy tool kit. Something that also interested me is their practical instructions for a twin-bucket emergency toilet, for use when the water systems go out. That may come in very handy in earthquake-prone Seattle, especially when the Big One hits.