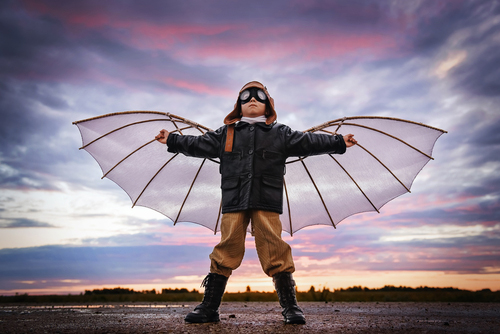 Our brains generate ideas all the time. They aren’t all good ideas. They can’t all be turned into best-selling novels. We have to identify them, capture them, turn them over, figure out how to use them.

Stephen King’s first published novel, Carrie, sold more than a million copies its first year in paperback. The idea for it started when he was working as a janitor one summer in a local high school. First, he noticed that the girls’ showers, unlike the boys’, had rings for shower curtains. The girls had some privacy. What would happen if they didn’t? Then, as he told the Guardian:

“This memory came back to me one day while I was working in the laundry, and I started seeing the opening scene of a story: girls showering in a locker room where there were no U-rings, pink plastic curtains or privacy. And this one girl starts to have her period. Only she doesn’t know what it is, and the other girls – grossed out, horrified, amused – start pelting her with sanitary napkins … The girl begins to scream. All that blood!”

He combined that horrific scene with memories of two girls he knew from school, reading he’d done about teenage girls and telekinesis, and started making his considerable mark as a master of the horror novel.

King is very generous with sharing how he gets his ideas. On his web site he writes: “I get my ideas from everywhere. But what all of my ideas boil down to is seeing maybe one thing, but in a lot of cases it’s seeing two things and having them come together in some new and interesting way, and then adding the question ‘What if?’ ‘What if’ is always the key question.”

He shared the inspiration for 10 of his other novels in an interview with Bustle.

Agatha Christie, still the best-selling novelist ever, said she got her ideas everywhere she went. The settings for her novels were pretty much the settings she lived in, so a conversation overheard in a tea shop might inspire her.  “I usually have about half a dozen (notebooks) on hand and I used to make notes in them of ideas that struck me, or about some poison or drug, or a clever little bit of swindling that I had read about in the paper”.

J.K. Rowling, author of the cultural touchstone Harry Potter series, says, “I haven’t got the faintest idea where my ideas come from, or how my imagination works. I’m just grateful that it does, because it gives me more entertainment than it gives anyone else.” The Harry Potter series was born during a four-hour delay on a train out of Kings Cross Station in London. Good thing for the rest of us that Rowling didn’t have anything else to keep her entertained. She has read widely, though, and cites influences from the Iliad to British folklore to Jessica Mitford, after whom she named her daughter. Wikipedia has a list of influences and analogues in her work.

Danielle Steel, the world’s best-selling living author, on the other hand, rarely reads because she’s writing all the time. Seriously—she recently told Glamour magazine that she writes every day, frequently working 20-22 hours a day, and she only reads other authors’ books in the one week a year she takes off. She says she draws her inspiration from working with a tiny kernel of an idea and building other ideas on that.

“I fed them the turtle food, I thought I was doing everything right,” Martin explained on The Late Show with Steven Colbert. “I couldn’t figure out why they would die. It certainly wasn’t my fault. I decided they were competing for the turtle throne. They were competing for who would be the turtle king. That was my first fantasy: Turtle Castle. It preceded Game of Thrones by many years.” (Personally, I’m suspicious. Martin was wearing a turtle pin for the interview. I remember people wearing those pins would ask each other, “Are you a turtle?” and you had to answer, “You bet your sweet ass I am,” or pay some sort of penalty. I digress.)

Martin has clearly read widely and deeply; the long, involved war between Starks and Lannisters bears many resemblances to the struggles between the houses of York and Lancaster in 15th-century England. His A Song of Ice and Fire, the basis for Game of Thrones, has many influences working in it, from Tolkien to world religions to several genres of fiction.

I got the idea for The Monk Woman’s Daughter from reading 19th century American history, particularly about Baltimore, its riots during the Know-Nothing era, and about Maria Monk, a woman whose accusations of sexual abuse within the Catholic church caused a sensation. She had a baby daughter, and I wondered what happened to the daughter. It isn’t clear from the historical record how her life unfolded—so I decided to unfold one for her in my book. The novel I’m working on now has as its central character a woman who gets only a couple of lines in the historical record: a “proper African wench” captured by Francis Drake off the coast of Mexico in 1577. I got that idea reading biographies of Drake.

If you just go about your daily life occupying your brain with what’s on your cell phone, the Muses are unlikely to interrupt you. You need to be looking, thinking, and possibly operating with intent.

Julia Cameron, in her classic book The Artist’s Way, makes a number of important recommendations, but two stand out for me: the daily pages, and the artist’s date. She recommends writing, in longhand, three pages of free-flowing thought first thing every morning. It sets the mind free, but also puts it into writing gear. She also recommends an artist’s date, a weekly block of time set aside to nurture your creative consciousness, your inner artist.

Some writers ask for an idea to come to them as they’re getting ready to sleep. I have sometimes used this technique to work on a problem—think about it a little while and ask for a solution for a problem I’ve run into. In the morning, the solution will often be there, ready to go.

Capturing the Idea: Write it Down!

You may have noticed or inferred a common thread here—write your ideas down! Keep a notebook with you, or at least find a piece of paper. Ideas have to know they’re welcome, and treated like they’re important. Keep something by your bed, maybe to write down your dreams, but certainly to write down ideas that come to you. Caveat: they won’t all make sense. They don’t have to. You don’t have time to work on every idea you’ll ever have.

While you’re writing things down, you can make lists of ideas. Anything that comes into your head. An article on writetodone.com urges you to use everyday experience this way: “Let’s imagine that you write a blog about blogging. Here is how you could use your everyday experience as inspiration. You wake up early in the morning: ‘Why early morning is the best time for writing.’ You take a shower: ‘How to come up with 20 great ideas in the shower.’ You have breakfast: ‘15 reasons why good nutrition can make you a fabulous writer.’” The article warns, “Not all of your ideas will mature into articles because some may be wacky.”

Wacky Ideas can be Fun

Even the ridiculous ideas get the brain juices flowing and the writing mind in gear. Especially if you remember to ask the fiction writer’s question, “What if. . .”

Then I thought, What a funny idea.

Hey, maybe I can use that!

Barbara DeMarco-Barrett’s book Pen on Fire: A Busy Woman’s Guide to Igniting the Writer Within has several useful exercises for generating ideas. Her book is set up with the idea that you can find fifteen minutes to write each day. She breaks down the process into chunks that you can handle that way.

Lawrence Block’s classic Writing the Novel: From Plot to Print to Pixel is also helpful. Be sure to get the one with “Pixel” in the title. Block’s first edition came out in the 1970s, but he’s kept his book updated. Publishing has changed a lot since 1978.

“Why You Get All Your Best Ideas When You’re Falling Asleep,” is a fun little article from the makers of Sleep Number Beds.

Once you’ve got your idea, maybe you want to decide how you’re going to proceed. My blog post, Writers on Writing a Novel, can give you some suggestions.

Previous Next
May 22nd, 2019|Writers and Writing|0 Comments