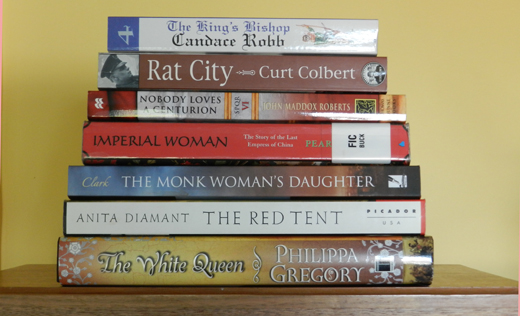 Do you have a favorite character in historical fiction? Johnny Tremain, perhaps? Scarlett O’Hara? Sethe in Beloved? How about Zorro?

Why We Read Historical Fiction

It surprised me to learn that we don’t necessarily turn to historical fiction when we’re looking for great characters. M.K. Tod publishes a reader survey on historical fiction on her web site A Writer of History. It isn’t a huge survey, but there aren’t many, and hers is certainly consistent and carefully done. People give six main reasons for reading historical fiction. Here they are in order:

What this says to me is that we don’t necessarily read or purchase historical fiction because of the characters. But when Tod asks participants to say what they enjoyed about what they’ve read, “characters both heroic and human” is suddenly in the top three. Les Misérables would probably have shown us a lot about 19th century France, but would certainly be less memorable without the heroic yet all-too-human Jean Valjean and the obsessive legalist Javert. Like Water for Chocolate might be intriguing as a story, but it is the passion inside Tita de la Garza that sets the pages ablaze. (Spoiler alert: other things catch fire, too.) To Kill a Mockingbird might be just an evocative story if the calm integrity of Atticus Finch hadn’t made it into what The New Yorker called “secular scripture.”

Famous historical characters aren’t always treated with reverence in historical fiction. That’s part of the fun. Gore Vidal’s six-volume Narratives of Empire  series on American history included not only an impressive amount of painstaking research but also plenty of gossipy and catty comments. (He has Aaron Burr say of George Washington, “he had the hips, buttocks, and bosom of a woman,” for example.) Shakespeare notoriously trashed Richard III in his historical plays. (Yes, those count as historical fiction!)  Julius Caesar, as presented in John Maddox Roberts’s SPQR detective series, is a supreme manipulator, subtle and slippery, who gets the detective Decius Metellus to trust him time and time again. Even when he knows he shouldn’t.

I wrote an earlier post about Ci Xi, the last Empress of China, and how historical fiction accounts were for a while fairer than the history accepted in the West. I’m looking forward to reading Philippa Gregory’s The White Queen, about Edward IV’s queen Elizabeth Woodville. During her lifetime, she was accused of being a witch and a poisoner. More favorable accounts have her as a sweet, pious, beautiful commoner who charmed a king. I don’t remember any accounts that dealt with her intelligence, which must have been formidable for her to have survived in the circumstances she did.  Gregory’s account might.

It surprised me a little to realize that several of my favorite made-up historical fiction characters are detectives. Ellis Peters’ creation Brother Cadfael is a longtime favorite. Decius Caecilius Metellus the Younger of SPQR is snarky, irreverent, a little bit lazy, and really good at filling the reader in on the juicier details of life in ancient Rome. Curt Colbert’s hard-boiled Jake Rossiter is a wonderful guide to the seedy city that was postwar Seattle. I realize that’s pushing the definition of “historical,” but the city has such a different idea of itself now that I think the characterization is right.

Two of my favorite characters are in Candace Robb’s Owen Archer series set in medieval York. I didn’t read mysteries much when I got the first book. I bought it primarily because it’s set in York, and I spent two summers there researching my thesis. The street map is still pretty much the same and I could recognize a lot of the locations. I came to enjoy Robb’s one-eyed Welsh archer, a cunning and capable man who can navigate wilderness and court intrigue with skill and principle. I also liked that he loved Lucie Wilton, who took over her father’s apothecary shop and handled it capably. Yes, that was unusual in medieval England, but not impossible. Lucie’s intelligence, courage, and humor make her a character that sticks with me, too.

I visited Robb’s website in the course of writing this post, and discovered to my delight that Owen Archer is coming back!

The “combination” characters are based on historical characters, but mostly made up. The story of Dinah doesn’t get a lot of play in the Bible. She gets one chapter: Genesis 34. In The Red Tent Anita Diamant created a rich world for Dinah and her family. Even though The Red Tent was originally published with little fanfare and no advertising budget, it became a word-of-mouth sensation, and is now a legendary success story in the publishing world. I think the remarkable character of Dinah is one reason for its success.

There’s also my own book: The Monk Woman’s Daughter. The notorious Maria Monk did exist, and she did have a daughter—actually two. Very little is known about the life of the elder daughter—so I made up a life for her. Vera is quick-witted and clever, usually principled but not always legal. I’ve spent many years with her, and I still like having her around.

Who are your favorite historical fiction characters? Why do you like them?

This is Part 4 of Enjoying Historical Fiction. You may wish to read Part 1: When History is Fiction, Part 2: A Different World, or Part 3: It’s Not About the Great Man.

Previous Next
May 7th, 2019|General, History and Historical Fiction|0 Comments