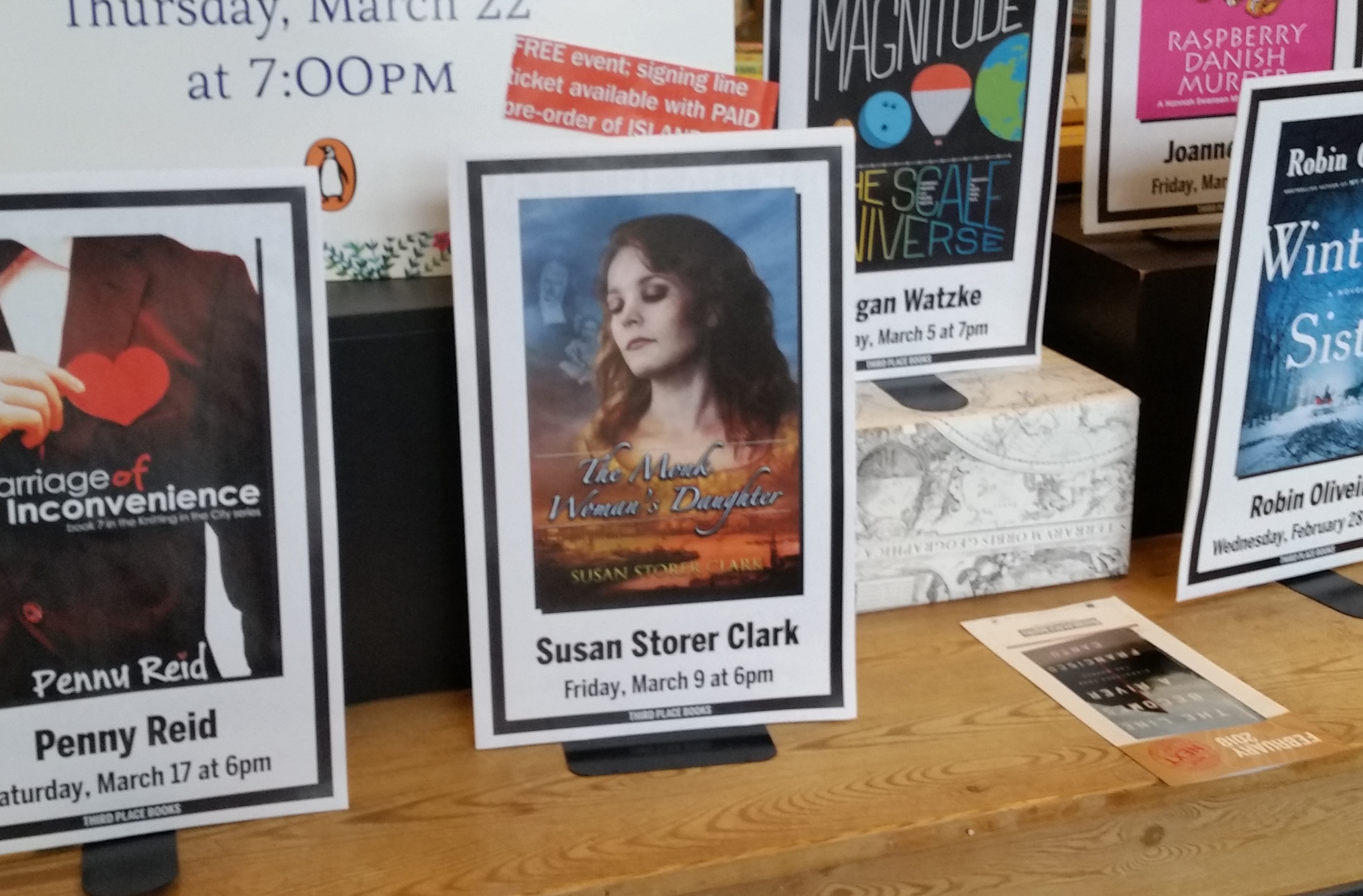 In earlier posts, I wrote about publishing my novel through Amazon.

But if you couldn’t handle doing a lot of work, you wouldn’t have finished writing your book, would you?

Still, there’s more to the story.

My book was up on Amazon—yippee! I told all my friends, and put it up on Facebook, and some people actually bought it. For some authors, this may be all they want. I talked to an academic author a few months ago who simply wanted her book available to people in her field, and she didn’t want to have to go out to promote it. If this is what you want, then Amazon is probably a good way for you to go, and you can stop reading right now and get to work publishing your book.

How Could I Promote My Book?

If authors want their books to sell, they have to promote them. Fact of the writing life. I figure one of my strengths is that I’m accustomed to speaking to audiences, and can make an interesting presentation about my book. I can write pitches and news releases, I know how to use social media, and I thought I could do a lot of this work.  I wanted to do readings in local bookstores and public libraries, and maybe at the occasional conference on American history.

Getting the chance to do that is difficult if you’re only published on Amazon.

Neighborhood bookstores are a great venue for local authors, but they are Amazon’s competition. When bookstores sell a book, they typically buy it at a discount from the publisher or a distributor. Amazon doesn’t give bookstores a discount, so why would they buy it? And why would bookstores give an author a venue to promote something that’s only on Amazon?

Well, they wouldn’t. And, generally speaking, they don’t.

I found that libraries weren’t interested either. Many said specifically on their web sites that they did not acquire books from independent or subsidy publishers unless—and there were different “unlesses,” but they were mostly that the book had to have substantial sales on its own, or be requested by patrons.

So now what? I could get paid publicity packages from Amazon, but they weren’t particularly useful for what I wanted to do.  I was talking to a friend (Jim Douglas, who wrote about his Peace Corps adventures in The Toughest Peace Corps Job: Letters from Somalia, 1969) who told me had paid to publish with a small press, Inkwater Press in Portland, Oregon, and he loved working with them.

I picked his brain for a while, and gave Inkwater a call. They were upfront and professional, and I went with Inkwater.

The Publishing Business is Changing SO Fast!

Book publishing has changed so much in the last few years, and continues to move so quickly, that what I write here may be obsolete by the time I finish typing it. For many years authors had a choice between traditional publishing and vanity publishing. In traditional publishing, an author typically works through an agent, and they both work with a publisher who assembles a team to handle the artistic, technical, and marketing parts of selling a book. Vanity publishing meant that an author paid for the work to be printed up in multiple copies of the book, and then was often stuck with a garage full of books that he or she had to sell. There were also a lot of scams in vanity publishing, and some of the bad smell lingers.

Inkwater Press doesn’t give itself any of these characterizations on its web site, but it is a hybrid operation. The author pays for the book publishing, but the book is printed on demand, and they offer a wide variety of technical and marketing services. I purchased a custom publication and marketing package for $4,999, which gave me paperback and Kindle editions, and a custom cover design.  They submitted my book to multiple websites, including their own, Amazon, and Barnes and Noble. The package included an edit of the manuscript, with 2 electronic proofs and 50 free changes. (I think I used all 50.)

(Let me just pause here to say that we ALL need editors. If I learned nothing else in more than 35 years of writing news and PR copy, it is that everybody needs editors.

I certainly did. My editor at Inkwater, Andrew Durkin, caught the fact that I had forgotten to kill off a character who was alive in one part of the book and completely out of the picture 75 pages later. I had cut the part of the book where I killed him, but he wasn’t a major character, so it was an easy fix. Still—what if it had gone out that way?)

Inkwater did all they said they would, and more, and they have been a pleasure to work with. They also did the work of getting an ISBN, a Library of Congress registration, and sponsored reviews in various publications, as well as a 5-book giveaway on Goodreads.

Still—how to get into the bookstores? I figured the best point in my favor (for someone who hasn’t read the book) is that I’m local, so I started with my most local store, Edmonds Bookstore. Close enough that my husband and I walk there when the weather’s nice. I stopped by and talked with the manager (this may take you two or three tries—they get a lot of people vying for their attention) and gave her a copy of the book to read. She liked it enough to say yes. I printed up postcards and sent them out to people I know from the neighborhood church, from Weight Watchers, from the chorus and the band I sing with, from the YMCA. About 20 people came, which looked like a crowd in that small space. They bought books!

I had to provide the books—the store sold them for me. They kept 40% and processed the sales taxes. I have since found out that this is the standard deal for bookstore readings.

I did much the same thing at another neighborhood place, The Couth Buzzard, a combination coffeehouse / used bookstore / community center.  And then built on that for a larger store, Third Place Books.  It was a great charge for me to walk in the front door at Third Place and see my book on display. That’s their display in the picture accompanying this post.

Now if all of this sounds like I am now a best-selling author, a dose of reality: bookstores don’t hold a lot of people in their reading spaces. Which is good, because I don’t attract big crowds. This whole process has sold a total of about 45 books.  And with all the expenses added in, I probably make less than a dollar per.

Some authors loathe doing readings. I love it. I enjoy talking about the book I wrote, why I made the choices I did, and the history of the time. People at these readings have asked wonderful, thoughtful questions. They’re as I was in the rise of the Know-Nothings, and the similarities to our own times. They are interested in a complicated, not-whitewashed view of history, which is history at its most fascinating.

A bonus—the King County Library and the Seattle Public Libraries now both have copies of The Monk Woman’s Daughter! Multiple copies! And, as of today—they’re all checked out! I think it’s because my friends made requests for it to be in the library. I’m going to be marketing more to libraries—with some help from Inkwater. I’ll write more about marketing to libraries as I learn.

If you’re an author who’s still trying to figure this out, I can’t give you any one-solution-fits-all advice. Still, you might want to check out Inkwater.com to see what they offer.

Also check out Katharine Hamilton’s excellent piece on indie publishing vs. self-publishing vs. traditional. She describes herself as an “indie author,” which means going through a company like CreateSpace, but choosing the editor, the graphics, the marketing strategy, etc., herself—which I decided not to do again after my experience on Amazon. Her web site www.katharinehamilton.com is well worth looking around if you think you might want to go one of those routes.

Once you start looking, be aware that not everyone defines “indie press” the way Hamilton does—and independent publishers may be traditional publishers or any of a number of other things.  Sherry Ficklin, another writer who blogs about writing and publishing, outlined a range of what people mean when they say “indie.”

Links to my earlier posts: Part I, in which I make the decision and publish to Kindle.

Part II, in which I publish the paperback, still on Amazon.  Upsides and downsides to both.

Still can’t decide what to do? Let me know. Maybe we can troubleshoot together.