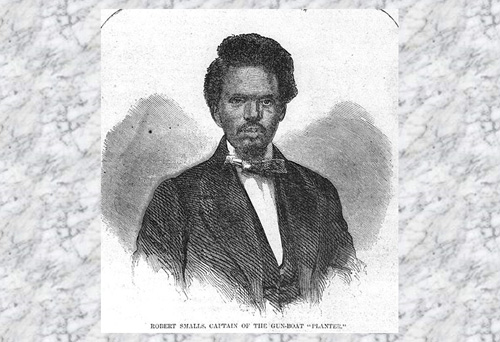 In the dark of early morning, May 13,1862, the Confederate supply boat Planter slipped quietly through the black waters of Charleston harbor. The sturdy coastwise steamer was a familiar sight. It often carried ammunition, heavy guns, and other supplies to the Confederate forces on the islands near the harbor.

Robert Smalls guided the Planter, as he had many times before. He had the skills of a pilot, and knew the harbor well. He wasn’t called a pilot, because he was African American. Everyone on the Planter that night was African American—nine men, five women, three children. The white officers had left the boat to spend the night on shore.

First they had to get by four Confederate military checkpoints, including Fort Sumter, where the first shots of the Civil War had been fired only 13 months before. They knew the proper signals. Smalls stood on deck, wearing the boat commander’s hat, and standing the way the white officer usually stood.

Finally they slipped by Fort Sumter, and made for the ships of the Union blockade. If the Confederate troops at Fort Sumter had realized their mistake quickly, their guns could have sunk the Planter. They didn’t. But then, as the boat approached the Union ship Onward, still flying its Confederate flag, the crew of the Onward prepared to fire. Smalls quickly changed the Confederate flag for a white one. The Onward held its fire and took them on board.

They were safe. They were free.

Trouble the Water: A Novel

I’ve known some of the story of Robert Smalls for several years. This past summer, at the Historical Novel Society conference, I sat next to author Rebecca Bruff as we signed copies of our books. She’s written a mesmerizing fictional account of Smalls’s early life and dramatic escape.

The creation of her novel had an interesting journey of its own. She was visiting the South Carolina Low Country and heard the story about Smalls. When she heard about what he’d done, she was astonished that she’d never heard of him before. Bruff was so intrigued that she moved from Texas to South Carolina to research and write her novel Trouble the Water. It’s an mesmerizing book, with some striking writing about the land and the water. She grounds her story in the history of the time, vividly realizing the permeating injustice of its social system, and the importance of religion in daily life.

Smalls fought for the Union all during the rest of the Civil War, gaining the rank of captain. After the war was over, he went back to his home town, Beaufort, and purchased his former master’s house. Then he spent nine months learning to read and write.

When he was growing up, it had been illegal to teach an enslaved child those skills.

He obviously learned to read and write very well. When he was a member of the South Carolina state legislature, he wrote legislation providing for South Carolina to have the first free and compulsory public school system in the United States, for all children, no matter their color or condition.

He served five terms in the U.S. House of Representatives, but then the Compromise of 1877 swept all African Americans from Congress.

A group of white politicians saw their chance to get back at Smalls, as well as at thousands of other African Americans. They accused Smalls of taking a $5,000 bribe when he was in the state senate. The evidence was flimsy, but he was still convicted. He appealed to the state Supreme Court, but they denied his appeal. He served only a few days before another deal, one that involved absolving white Democrats of election fraud, got him free.

The long era of Jim Crow was under way. In 1895, South Carolina changed its constitution. Even though Smalls was a delegate, and spoke strongly in favor of equal civil rights for black and white, the new constitution stripped many of its black citizens of their civil rights.

Smalls never again held elective office. He received a political appointment as Customs Collector for the port of Beaufort in 1889 and served until 1911. The long era of Jim Crow began. He remained active in civil rights efforts for the rest of his life, but the odds were stacked heavily against him. Smalls died in Beaufort in 1915, in the same house behind which he had been born a slave. He remained until the end a staunch advocate for the political rights of African Americans.

A small memorial plaque quotes him, “My race needs no special defense for the past history of them and this country. It proves them to be equal of any people anywhere. All they need is an equal chance in the battle of life.”

For many years, his memory was submerged, and his legacy ignored.

During the debate over South Carolina’s constitution in 1895, Smalls made a startling claim: “Since the reconstruction times, 53,000 negroes have been killed in the South.”

That is a staggering number, much more than the 4,000 that had been widely accepted. Recently, more scholars started to challenge it. Historian Douglas Egerton combed over primary sources that would have been available to Smalls, and concluded that Smalls was right. “Those sources clearly demonstrate that white Democrats, an electoral minority in every Southern state after the war, engaged in racial terrorism to restore the prewar social order. Despite the imprecision in the records, I found Smalls’ figure to be entirely plausible.”

Many Americans are taking a closer look at our history now. We’re realizing the history we learned doesn’t necessarily match what happened.

The story of Robert Smalls has started to spread, and his hero’s journey continues.