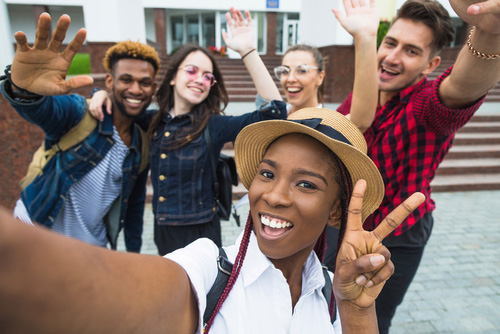 It troubles me that white American parents appear to be opting for less diversity in schools for their kids. My husband and I considered it a plus for our kids’ education that they would be going to school with kids who didn’t look like them or think like them, though I have to say we often worried whether we’d made the right decision.

As I wrote in earlier posts, I think we did, and our kids agree, even though some of the lessons they learned were painful. I think their experiences with their wide range of classmates helped them, and us, to go on learning about the different people in our world long after they’d left school.

Diversity in the Curriculum

Some of the lessons came from the actual curriculum, such as the assigned reading. When I was in high school, we read The House of the Seven Gables and A Tale of Two Cities. But at Montgomery Blair, the majority-minority high school our children attended, they assigned The House on Mango Street and Song of Solomon. (All of these, in my opinion, are well worth reading.) Our daughter Kat writes: “I couldn’t get myself to relate or understand books like Song of Solomon, but I realize now I wouldn’t relate to Moby Dick either.” She also didn’t care for Grapes of Wrath, but Chinua Achebe’s Things Fall Apart still resonates for her.

Ed writes, “One of the coolest learning experiences that I had was portraying Dr. Charles R. Drew in a class project in 6th grade. [Drew was an African-American physician and researcher, who developed improved techniques for blood storage, leading to the development of blood banks that saved thousands of lives in World War II.] At first I was discouraged because I had never heard of him or his work like I had Einstein or Tesla, but once I started researching his work in blood work and plasma, I was very interested and impressed. I worked with my parents to get a lab coat, a microscope, and some containers with model railroad dirt scenery (to simulate dried and separated plasma) and took pride in introducing his life to my classmates. I also had the opportunity to speak over the phone with his daughter [Charlene Drew Jarvis, former DC city councilwoman and president of Southeastern University] about the man himself, so I could try to present him as well as an 11-year old could.”

Learning to Talk to People

One of the most durable lessons for Ed has been how to talk to people. (This is fortunate, since my son is definitely a talker.) He learned from an early caregiver to speak respectfully, but not change his way of talking. Ed writes, “Later in life, I saw my black classmates at school making fun of, ‘white people trying to sound black.’  I asked what the big deal was, and they said that it sounded like they were mocking black people conversations and lingo instead of trying to learn it.  They told me, ‘Just speak plainly, we’ll understand you.  If we don’t, we may ask you to explain. Or we may not.’”  Ed also writes that he’s not afraid to use the term ‘crazy-ass white boy’ referring to himself, or to talk about ‘crazy-ass white people’ doing or saying something stupid. He adds, “I am not afraid to learn more and share laughter. Laughter, I learned, is a very universal and cohesive language.”

His Hispanic friends “taught me many swear words in Spanish which gave me endless enjoyment as a young boy.  They later taught me more so I could at least say hello, thank you, good bye, along with other small conversational bits and make sure my pronunciation was correct.  I never thought twice about it, and took pride in being able to understand more and more from others speaking Spanish as I grew up. . .I also think this early immersion generated a healthy predilection towards Hispanic culture, and later Latino culture as a whole.  The music, the language, the art, the food, the style, the beauty, it all makes up a large part of who I am and how I express myself today, and I still want to learn more.  My Spanish is nowhere near as strong as it once was, but I want to get it back to that level some day.”

Ed continues, “I also had the electric experiences of witnessing, then daydreaming, and later the often outright-male-dumbfounded-awestruck fascination with girls/women from non-white cultural backgrounds at the same time as white girls/women fascinations.  For me, there were no boundaries or hesitations about the race of the girls/women I found attractive, nor any in the ones that found me attractive. I never felt like it was “chasing the exotic,” as it was more just responding to their characteristics that snagged my attention.  I had fun talking to them because of who they were when I was very young, then I was a nervous teenage boy responding at first to what I saw, and later integrated the equal value of what I heard.”

When Kat was in 8th grade, the U.S. History teacher gave an assignment: trace your family tree back to when they arrived in the United States. Kat asked, “What about people whose families are older than dirt here?” She says he answered, “’As far back as you can go,’ with the implication of both, ‘Yeah, right,’ and you SHOULD go to when your family arrived. He then added ‘and try to add the generation before they arrived,’ as though that would somehow even the playing field.”

All the families in my family tree were here for the Revolution, as were most of the families in Rich’s tree. This was a heavy-duty assignment. (I’ve thought since then that I should have called up the teacher and questioned it, but I didn’t.)

Kat had several classmates who were children of recent immigrants. She continues, “One of my classmates got to do a pretty piece of paper, with her name, her parents, and her grandparents for good measure. She turned it in early. I didn’t get mad at her, but I was pissed at the teacher. I tried to argue, but to him it probably sounded like the privileged white girl kvetching about work. Fine, I’ll show him that we’re a family with a lot of history, damn it.

“I remember spending night after night with you doing the research, cutting and pasting names and portraits to 4-freaking poster boards taped together. The internet was in its toddler years then, but we still found the Mormon site Ancestry.com the most helpful. Retroactive baptism never bothered us much. Those relatives were too dead to care.”

She says that when she turned it in, “I also managed to present it in a pretty petulant manner.” He gave her an E on the project—not “Excellent,” but essentially flunking—because it was late. What really frosted us both was that he kept it to show other students. Kat says, “If it was so great, why not give it a better grade?”

Here’s where the continuing education part comes in. We didn’t ask then—what about kids whose ancestors were enslaved? Records weren’t kept about them. I posted on Facebook to ask my friends what they thought—and I got a virtual earful:

From a friend who is African-American: “Yes, the assignment is unfair on its face for those of us who have no idea when our ancestors first came here or from where.  . . It’s the emotional impact it could have on a kids descended from enslaved people that I have to take a minute with.”

From a friend who was adopted, who got a similar assignment in fourth grade: “I found the assignment painful then and painful to remember now. My adoptive status wasn’t common knowledge to my classmates. This is one of those just plain stupidly insensitive assignments.”

From a friend who is Jewish: “We may know generally when our families came here, but records in Europe may be difficult to access or nonexistent because of the Holocaust.”

From a friend who adopted children from a foreign country: “In my opinion, these types of assignments should not be in schools. They privilege a ‘traditional’ family dynamic and can be quite traumatic for children whose family histories are different.”

From a friend whose family was so dysfunctional he couldn’t even write the usual “what I did on my summer vacation” essay: “I would literally feel sick and be on the verge of tears if I was expected to do it in class. I never could. I’d turn in a paper with just my name and date and the title on it.”

Others reminded me that there are children who come to school from foster families, or whose families may have had to “disappear,” for a variety of reasons.

It’s clear to me now that our response to this assignment simply shows our privilege. And Kat and I both learned a lot about our family tree.  Still, Kat isn’t feeling generous with this teacher: “To a 13-year-old girl, he was a colossal dickhead.”

One Facebook friend defended the practice, writing of how she and her daughter researched her family, and what they both learned. One friend whose daughter was estranged from her father got a trove of fascinating stories from her own family. And with those in the balance, here’s where I come down: tracing a family tree is a worthy endeavor—for a family. We need to realize there are many kinds of families represented in our schools and in our society, and stop giving out “Trace Your Family Tree” as a school assignment, unless a student can also opt for something else. I personally like the question asked so long ago at East Silver Spring, “What language(s) do you speak at home?” (Kat’s reply to that question in high school was, “English and Sarcasm.”)

As for the original purpose of this series, to figure out if attending schools with a diverse population is good for white kids, Kat sums up: “I would definitely tell people to send their kids to diverse schools in half a heartbeat. It set me up with the ability to reach out to people, no matter what, and to try to understand the world they were coming from. Putting kids in diverse schools forces them to think outside themselves, whether they want to or not.”

I’m grateful for my children–their great attitudes, their ability to express themselves, and their great response to my request for their memories. I think the diversity they encountered did them a lot of good.

I did a cursory internet search to see if schools still give the family tree assignment, and I couldn’t find any definitive statistics. I did find a lot of lesson plans, for primary, elementary, middle, and high school students, and one excellent New York Times article—written in 1999.

Some help for African American searchers: A friend of mine writes, “Family Search Indexing is a site I volunteered on for months. I was loading military registrations from Alabama for WWII…mostly black populations. The index will be free for anyone who wants to use it.” Here’s the site: https://www.familysearch.org/indexing/

Also, in the seven years following the Civil War, the Freedmen’s Bureau provided assistance in locating family members for former slaves, as well as compiling and recording local censuses, marriage records, and medical records that provided full names and the names of former masters. Not all of the information is yet online, but it’s worth a check through the National Archives.