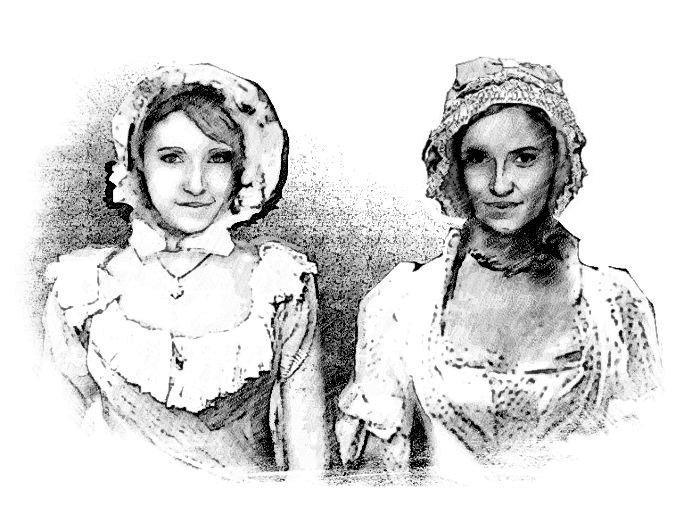 Sometimes we don’t really know what we’re looking at. A scene in my novel The Monk Woman’s Daughter has two “parlor girls,” high-class prostitutes, visiting a hat shop where my main character Vera works.

Delilah and Emmeline were in a hilarious mood that evening. They had earned a great deal of money that week from a Bostonian who wanted them to perform opera for him together, with Emmeline dressed as a page. She sang a little of the music for me. She had a lovely voice, sweet and high, and, even though the song was in a language that was gibberish to me, she put on a great show of acting like a young man unable to make up his mind. She and Delilah hooted, and Delilah said that their caller became very excited when they told him they were sisters.

“Why did you tell him that?” I asked. “Was he such a fool that he believed it?” After all, Emmeline was one of the fairest women I’d ever seen, and Delilah was clearly a colored creole. They gave great grins to each other, and then to me. “We are sisters.”

I looked at Miss Easley, who gave a catlike smile and nodded. “Don’t look at our color,” said Emmeline, “Look at us.” And as they stood together arm in arm I realized that they were the same height, with very similar figures, the same smiles, the same noses. “Daddy was a sailor,” said Delilah. “He was white. He said Mama was the prettiest girl he ever saw, even if she was brown. She was a slave in Charleston and he stole her. Stowed her away on a lumber sloop and brought her to Baltimore.”

“We have a brother, too,” said Emmeline. “He’s a carpenter, and he passes for white.” “Well, you do, too,” said Delilah. She shrugged. “Folks believe what they see.”

And we see what we expect to see.

They left in the deepening twilight, having again spent well on hats, flowers, lacy frills and ribbon furbelows. I watched them go, and realized that, from the back and in the twilight, they were indistinguishable, with the same posture, the same backs, the same walks, the same gestures. How could I have missed that they were so much alike?

I have to confess I thought of Emmeline and Delilah long before I heard about Lucy and Maria Aylmer, British twin sisters whose looks are equally different: http://nypost.com/2015/03/02/meet-the-bi-racial-twins-no-one-believes-are-sisters/. I thought I was coming up with a nifty way to illustrate in fiction what an artificial concept race is, but real life life beat me to it.

I grew up in Memphis during the Civil Rights era, and went to segregated schools until I got to college. I remember riding a city bus one day when I was in high school, and seeing a young man, clearly African-American, who looked a lot like someone I went to school with. I knew better than to bring up the subject with either person, but I’ve often since wondered if the two were closely related; it was so disadvantageous to be black I figure that almost anyone who could pass for white, would. Decisions to “pass” often isolated people from their families.

When Bliss Broyard discovered that her father Anatole was not white, as she’d thought, but had been “passing,” she went looking for the rest of his family, most of whom she’d never met. He was descended from free people of color in New Orleans. She describes her search in her book One Drop. Some of the family, including her grandparents, decided to pass as white, some had remained identified as black, and some were deeply bitter about the decisions that others had made. Here in the United States, where the population moved around so much and so many people reinvented themselves, it’s hardly a surprise that about 10% of Southern whites have African ancestry, and that most of them didn’t know about it. People who were passing often felt that they had to keep that information to themselves to keep themselves and their families safe.

We see what we expect to see. And sometimes we don’t really know what we’re looking at.

BTW, extra points if you figured out Emmeline was singing the role of Cherubino in Mozart’s The Marriage of Figaro. High-priced parlour girls often entertained their clients with their musical skills, as well as their more obvious ones.

One Drop: My Father’s Hidden Life – A Story of Race and Family Secrets, by Bliss Broyard, was published in 2007, and is widely available. Broyard gives a good introduction to the New Orleans culture of the gens de couleur libres, free people of color, as well as digging deep into her scattered extended family.