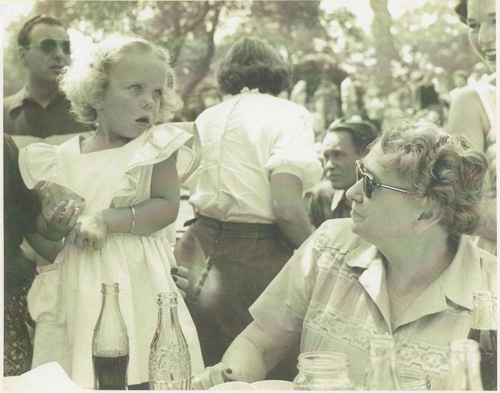 I don’t know why I waited so long to read Before We Were Yours. It doesn’t seem like anybody else did. It was on the New York Times Bestseller List for more than a year and sold at least two million copies.

Maybe it was fear. I write often about powerful people exploiting the less powerful, and the research for that is always pretty depressing. But author Lisa Wingate’s story-telling skills really shine in this compelling dual-timeline story. Her novel is compelling. The writing is lyrical, done with a skill that can make a reader’s heart sing.

She manages that with some grim material.

Georgia Tann was a wealthy, well-connected woman who took children from the mothers who bore them in prisons or in hospitals, from the 1920s until 1950. She stole only white children and looked especially for those who were blond and blue-eyed, like the angelic-looking child in the picture accompanying this article. Tann is the middle-aged woman in the picture. Her Tennessee Children’s Home Society orphanage handled hundreds of adoptions. But the children she represented as orphans rarely were. It’s estimated that she stole around 5,000 children, and that about 500 of them died of neglect, abuse, or disease.

In Wingate’s novel, Tann’s hired thugs—who might have been officers of the law—take five children off a shantyboat in the Mississippi River at Memphis. The oldest child, Rill, is twelve, and her story is much of the book’s 1930s narrative.

The character of Rill is a wonderful creation. In one of my favorite quotes, Rill thinks, “I shush my mind, because your mind can ruin you if you let it.” She’s smart and compassionate, and her skills as a survivor probably keep her and some of her siblings alive.

The book’s second narrative takes place in the 2000s, after many of the records of the Tennessee Children’s Home Society orphanage were unsealed. Avery Stafford, a member of a prominent South Carolina family, discovers that a member of her family was not born into that family. She had been stolen from her birth family in Tennessee by Georgia Tann.

The state government of Tennessee discovered enough malfeasance at the orphanage to shut the place down in 1950. Mostly what they concentrated on, though, was financial. They didn’t go into tracing the adoptions, possibly because so many of the children went to wealthy, well-connected families: Joan Crawford adopted two children from Ms. Tann. June Allyson and Dick Powell adopted a little girl. Herbert Lehman and his wife adopted a little girl. Never heard of Herbert Lehman? When he was governor of New York, Lehman signed a law sealing birth certificates from New York adoptees.

How did Georgia Tann get away with stealing children? It seems incredible, but she would go into a hospital where a woman had just given birth, and get that woman, still groggy from anesthesia and labor, to sign away her baby. How did she get away with taking children from day nurseries or even their own homes? Taking them, destroying records, and selling them?

The answer is simple and obvious: she stole poor children. She stole from people who couldn’t fight back. Tann took the children of single mothers, indigent parents, women in mental wards, women newly divorced. She had sources in welfare agencies and medical clinics. People used those lacked the resources to find their stolen children, let alone get them back. She took from poor people their greatest treasure, perhaps their only one: their healthy, beautiful children. But that was okay, you see, because she sold them to rich people. Rich people were better people. They would make better parents. And besides, they paid high prices.

In an author’s note, Wingate says, “When interviewed about her methods, Georgia unabashedly extolled the virtues of removing children from lowly parents who could not possibly raise them properly and placing them with people of ‘high type.’”

Tann was well off, even before she started selling children, and she was connected. She was good friends with Memphis political boss Edward Hull Crump. Crump was the dominant force in the city’s politics for most of the first half of the 20th century. His political organization linked business interests in Memphis to political interests at the local, state and national levels. He personally selected the mayor of Memphis for 40 years and was one of Tann’s most important protectors. Juvenile Court judge Camille Kelley signed hundreds of custody and adoption orders for her. Together they lobbied for Tennessee state adoption laws restricting access to records, some of which remain on the books to this day.

This Story is not Unique

Children are valuable beyond price, and yet they have always been bought, sold, trafficked, and abused. They still are. It happens everywhere.

One detail about Georgia Tann’s life brought this home to me. The Tennessee Children’s Home Society building was at the northwest corner of Poplar Avenue and North Willett street in Memphis until it was torn down in the early 1950s. About 10 years later, I lived with my family in a house on the southeast corner of that same intersection. It was a pleasant, leafy part of town, and nobody would ever guess that such evil had lived there. I certainly didn’t know it. Not until I read Wingate’s novel.

The Banality of Evil

The face of evil is ordinary, as Hannah Arendt pointed out in her famous work on Adolph Eichmann. She gave us the term, “the banality of evil.” Eichmann was an architect of the Final Solution, the Nazis’ killing of millions of Jews, Roma, homosexuals, and others they deemed undesirable. Arendt wrote that he could commit such extensive evil because he was unable to think from the standpoint of anyone else. Great evil had been perpetrated by a man who seemed “terrifyingly normal.”

And he was. There are many people who see others as not-quite-equal. They seem ordinary, and they are. Evil can dwell in any part of town, behind the pleasant mask of neighbor.

Lisa Wingate has also collaborated with journalist Judy Christie in the non-fiction book Before and After, stories from 15 people Tann sold when they were children. Investigative reporter Barbara Bisantz Raymond published The Baby Thief: The Untold Story Of Georgia Tann, the Baby Seller Who Corrupted Adoption in 2007. The book won an Angel in Adoption Award from the Congressional Coalition on Adoption.

I’ve written about related topics in my blog: “The Evil We Must Name,” about the abuse of the less powerful by those with power.  “Getting Away With Murder,” about how the white husbands and guardians of Osage people murdered them to get their oil. On a less grim note, I also wrote for historical fiction geeks who love to fact-check and gasp, Omigosh, that really happened! “The Fun of Fact-Checking.”

Before they are stolen, the five children in Before We Were Yours live with their parents on a shantyboat in the Mississippi River. Shantyboats were often constructed by poor people who lost the right to live on the land, and so they’d knock down the house and build a boat to live on. Wingate writes lyrically about life on the shantyboat. (Personally, I took it with a little grain of salt because she didn’t mention mosquitoes.)

There’s an interesting article in the People’s River History Project about shantyboats, and how the concept is morphing into something much more middle-class. I live just north of Seattle, and believe me, the people who can afford the houseboats on Lake Union these days are not shanty dwellers. You can get Harlan Hubbard’s 1953 book Shantyboat: A River Way of Life on Google books.