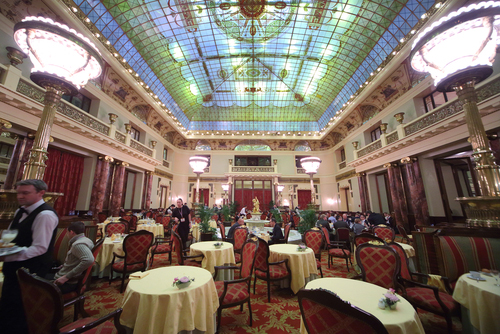 What’s the fun in fact-checking? Let’s take a look at a masterpiece.

A Gentleman in Moscow, a historical novel by Amor Towles, has won so much acclaim that another award seems superfluous.

This novel wins the “Most Fun to Fact Check” award from History Muse.

In case you haven’t read it, the book begins in 1922, when the Bolsheviks who took over in the Russian Revolution order the house imprisonment of Russian aristocrat Count Alexander Ilyich Rostov. Since he lives at the Metropol Hotel, he is to stay there. First he’s moved from his comfortable digs to a small attic room. He stays there for 32 years.

His life goes on. It goes on in an unexpectedly fascinating and engaging way, all of it unfolding inside the Metropol Hotel.

I’ve never been to Moscow. I had vaguely heard of the Metropol. Was there such place? Was it anything like as fascinating as Towles has painted it, or did he make it all up? To the internet for fact-checking!

There is indeed a Metropol, and it appears to be as grand and fascinating as Towles has described it. Built in Tsarist Russia, right across from the Bolshoi theater, its imposing exterior houses a magnificent dining room. A recent shot of the dining room accompanies this post. Much of the action of the novel centers around events in this dining room, and political events that affected it.

Why the Metropol Survived—and Thrived

The Bolshevik government might well have destroyed the Metropol as it did so many of the institutions of privilege, but, as Towles notes on his website, “[W]hen the major European nations began restoring trade and diplomatic relations in the 1920s, the Bolsheviks realized that the hotels of Moscow were going to provide Western visitors with their first impression of the new Russia. Should weary ambassadors or businessmen spend their visit in some austere hostel with shared bathrooms, humble furnishings, and limited services, they might draw the conclusion that Communism was failing!”

So they restored the elegant dining room, uniformed bellhops, excellent food and drink. Still, the bureaucratic sensibility of the apparatchiks shows up in the novel, most memorably in the complicated order tracking the waiters had to do. Towles’s site quotes a journal entry from John Steinbeck outlining this very system.

Journalist Harrison Salisbury of the New York Times makes a cameo appearance in the novel. Salisbury’s overcoat and hat are stolen from a Metropol cloakroom to provide a disguise. While it doesn’t come under the rubric of fact-checking, Towles has a charming story of how Salisbury came to be in his novel:

“When I was a boy of ten, I threw a bottle with a note into the Atlantic Ocean near summer’s end. When we got home a few weeks later there was a letter waiting for me on New York Times stationery. It turned out that my bottle had been found by Harrison Salisbury, a managing editor of the Times and the creator of its Op-Ed page. He and I ended up corresponding for many years, and I eventually met him on my first visit to New York when I was seventeen. It so happens that Salisbury was the Moscow bureau chief for the Times from 1949 to 1954. A few colorful details in A Gentleman in Moscow spring from his memoirs.”

It’s really gratifying to me when readers let me know that their fact-checking of my own novel The Monk Woman’s Daughter has introduced them to some American history that they didn’t know. Most of us have heard of the Know-Nothings, a political group that plays a prominent part in my story, but didn’t know what they thought, what they did, or how closely they parallel some of our current political movements. I’m really pleased when people check it out, and even more pleased when they were interested to learn about it. Same goes for Maria Monk, a real woman, whose claims to have been a nun made pregnant by a priest created a sensation in the 1830s, and contributed to riots in 1850s Baltimore.

When I first wrote about her still causing controversy years after her death, my “crit group” of writers pounced on it, saying it was preposterous. That part was true. It was why I started finding out about Maria Monk.

Remember that old quote from Mark Twain*: “It’s no wonder truth is stranger than fiction. Fiction has to make sense.”

Even fiction classified as “magical realism” can give a reader the fun of fact-checking. Nobel laureate Gabriel Garcia Marquez’s monumental 1967 novel, One Hundred Years of Solitude, contains a horrific episode of a massacre of thousands of striking banana workers. That was based on a real incident, the Banana Massacre of 1928, when the Colombian army gunned down workers at the behest of the United Fruit Company. United Fruit, by the way, survives as Chiquita Brands International, and has had a persistent record of abusive labor practices.

The Fun of Fact-Checking Anachronism

For some readers, the fun of fact-checking is the “gotcha” moment of discovery of anachronism in historical fiction. (I personally define anachronism as “Something that’s out of place because it’s out of time.”)  I think all writers dread this happening to them. As for me, I agonized over when I could introduce hoop skirts into my narrative.

Sure, most of us know better than to have Julius Caesar drinking tea out of a Styrofoam cup. But most of us wouldn’t know better than to have a scullery worker enjoying a cup of tea in 1650s England. It’s still wrong, and a writer can get in some very embarrassing trouble because of a mistake like that. (Tea was an expensive luxury at that time and in that place. A kitchen maid helping herself to a cuppa would likely have been flogged.)

What have you learned from fact-checking historical fiction? Spot any hilarious anachronisms? Did you learn something fascinating?

*Other people, such as Leo Rosten and Tom Clancy, have said much the same thing. I give Twain credit because he was alive earlier than the others.