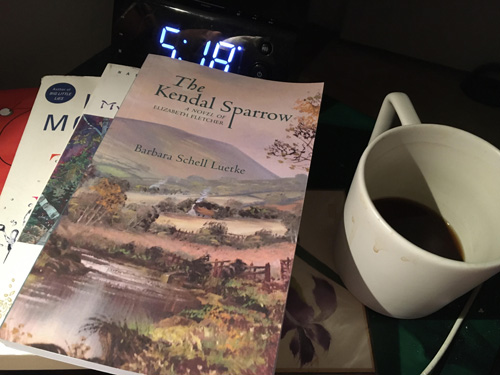 The Kendal Sparrow is a historical novel telling the story of Quaker Elizabeth Fletcher, a young woman moved by her faith to leave her home and walk the English countryside preaching, telling people that God’s presence could be felt everywhere.

Sounds innocent enough, doesn’t it? It was illegal.  Author Barbara Schell Luetke explains, “Anyone who was not ordained as a minister and interrupted church services, or preached in the market, was subject to arrest, jail, and beatings.”

Luetke includes in her novel other serious punishments and violations to women based on what she knew of what happened to women who were jailed or otherwise punished. One woman was “bridled,” a contraption placed on her head that put an iron clamp on her tongue. Sometimes the clamp cut deeply into a woman’s tongue. Sometimes it caused deadly infections.

The 1650s were dangerous and uncertain times in England. The Puritan revolution had succeeded in taking over the government and executing the king. The Puritans had been a small group of dissenters only about 50 years before. After their success many different dissenting groups sprang up. For example, there were the Ranters (not well organized, often associated with nudity), Diggers (egalitarian, thought farmland should be held in common), Levellers (committed to popular sovereignty and extended suffrage), and Muggletonians, an anti-science sect named after tailor Ludowicke Muggleton.

As a much more famous writer says, I am not making this up.

These sects, along with the Quakers, preached their own version of the gospel. They all threatened the given order.

Luetke told me, “I have thought quite a bit about how Quakerism survived the 17th century when other emerging sects did not. It seems that the strategy of having Friends go in pairs and small groups to populated places was an important reason. About a third of those who did this traveling ministry, the Valiant Sixty, were women. For the most part, they were not in leadership roles, but many were daring and extremely faithful.”

The Discovery (and Invention) of Elizabeth Fletcher

Luetke, a longtime Quaker, discovered Elizabeth Fletcher’s story years ago, almost by chance. She told me, “I read about her in a small booklet at a Friends’ school in Iowa. [S]he stayed with me for years.” Luetke published a booklet 17th Century Remarkable Quaker Youth, but she wanted to tell more of the whole story than a strict historical accounting would allow.

That’s because there aren’t many historical details available. Women in those days could rarely read much, let alone write their own stories in journals or letters. Luetke says, “It seems they were only ‘recorded’ in the journals or letters of men when terrible things happened to them that were beyond what was typically happening to Friends at the time.” She goes on to point out that this small group of young people, known in Quaker lore as “The Valiant Sixty,” were very important to the establishment of Quakerism at a time when so many religious splinter groups were springing up.

Luetke has created a compelling and credible heroine in Elizabeth Fletcher. It took her years of research, traveling to places Fletcher went. She found grant funding to get her to a Quaker research library in England. (She lives in Seattle.) “I spent six weeks at Woodbrooke Study Center in central England and also met with Quaker historians in Ireland—the two places where my main character, Elizabeth, preached.”

Writing her book took many drafts. (Full disclosure, we are “writing buddies,” and I read several of those drafts.) Luetke is an established professional in deaf education. She has written eight books and more than 100 scholarly articles. The Kendal Sparrow features a deaf character who uses sign language. And, yes, that’s historical.

Was writing fiction very different for her?

“Oh, my yes! I had to learn a completely different kind of writing and was helped by friends and editors. I was fortunate to have a grant that allowed me to pay a “development editor” for the writing of most of the book. That was extremely helpful, but friends (who wrote themselves) were equally important. I was challenged to describe scenes as I saw them in my head—with detail and dialogue.”

The descriptions of the countryside in the north of England are vivid and lyrical. Elizabeth’s home town of Kendal is on the edge of the lovely English Lake District. “It was important to me that Elizabeth found her faith in nature because that is primarily where I find mine. I chose to have the men rely more on the Bible (which they could read) and the women more from their chores, gardens, and experiences as they walked to market. I am hopeful that in the different descriptions of faith, readers will find theirs.”

Barbara Schell Luetke will be speaking about her book at the Ireland Yearly Meeting in 2021. She is available to speak to church groups or book clubs. You can e-mail her at bluetke@ymail.com.

Luetke wrote an article for Friends Journal in 2002, when she was just beginning her research: “Young Adult Quaker Ministers: Mary Fisher and Elizabeth Fletcher.”