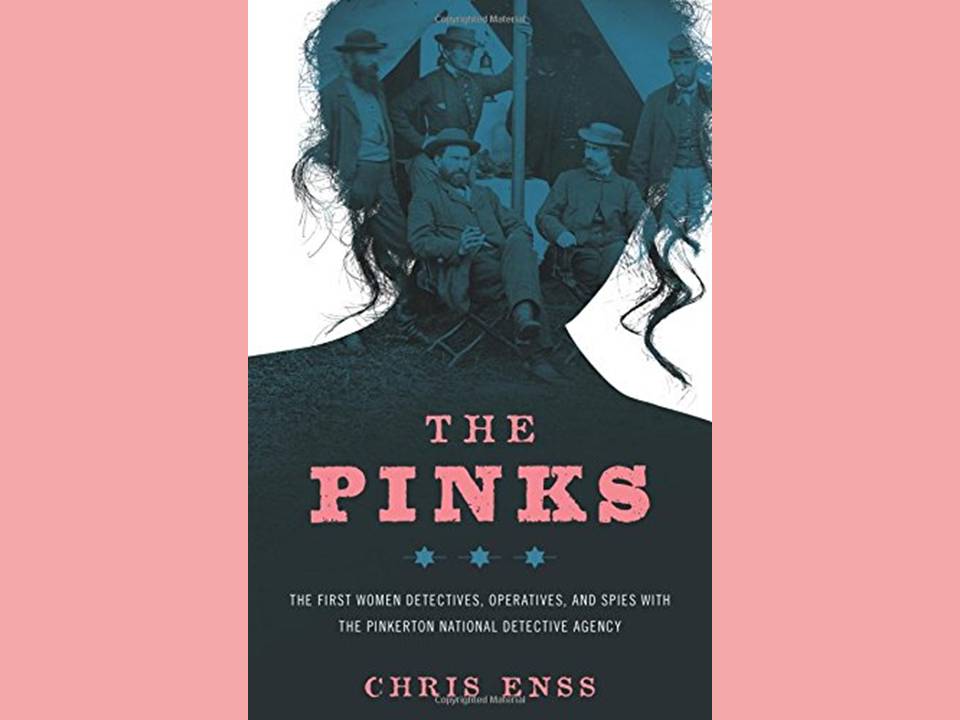 I knew Allan Pinkerton had hired a woman detective just as his agency was getting started. I’ve thought about creating a fictional woman detective working for Pinkerton after the Civil War—but it never occurred to me that he’d hired more than one. Chris Enss, with her excellent book, The Pinks: The First Women Detectives, Operatives and Spies with the Pinkerton National Detective Agency, shows us the work of ten “Lady Pinks,” women of intelligence and nerve who carried out complicated spy missions for the Union during the Civil War.

Kate Warne was the first. She was a young widow when she walked into Pinkerton’s office in 1856, and asked for a job as a detective. She told him women could often find out things that men could not. Pinkerton was an enthusiastic innovator, willing to defy convention if he thought it would work, and he hired her.

Two days after she was hired, Kate Warne was on her first case. Large sums of money had disappeared from the care of an elite express company: one locked pouch with $10,000, and another with $40,000. Pinkerton suspected the manager of the company, but the case against him seemed very weak. Still, when the manager left town for a while, the Pinkertons followed him, and noted that he purchased expensive clothes for himself and his wife, stayed at the finest hotels, and invested in racehorses. His actions prompted his arrest. He was taken to a prison in New York.

Enss spins a suspenseful story of how the Pinkertons worked this case. Kate Warne made friends with the wife, telling her a long story about a husband falsely imprisoned as a forger.  Another Pinkerton agent, tall and remarkably good-looking, charmed her at dinner gatherings. A third agent got himself hired as the husband’s lawyer, with another agent as his courier. After several deftly told twists and turns, the Pinkertons win the case. I couldn’t help but think of the various Mission: Impossible teams.

Chris Enss is not only an author, but also a scriptwriter, a comedienne, a wonderful writer about the American West, and a private detective. She graciously agreed to answer some questions I posed:

History Muse: How did you decide to write this book?

Chris: I am fascinated with women in history who excelled in non-traditional roles.  Kate Warne was one of those women.  I was equally intrigued by Pinkerton himself.  He was a pioneer in the industry of private investigation.  The story of women Pinkerton detectives was begging to be told.

History Muse: I think many of us think of detective work and spy work as solitary, but these women were often part of teams that, frankly, reminded me of Mission: Impossible. How often does that happen? And are you considering a screenplay based on any of these chapters?

Chris: What’s interesting about PI work is that every case is different.  There are times working alone has its advantages and just as many instances when working with a team is important.  I’m am amazed at the dedication The Pinks had to stay on the job for so long.  They had to go undercover for several months and they were content with the case being solved.  No one was out for individual glory.

In my PI work I am generally alone.  I’ve not been involved in any team investigations.  I’m sure the Pinkerton National Detective Agency continues to work with teams to get their suspect.

I am happy to report that Alan Kaplan and Alicia Keyes have optioned The Pinks.  I’m not sure if the program will be a cable series or what, but I’m excited to see what they’ll do.

History Muse: The stories in your book are mostly from the Civil War, but the Pinkerton Agency has been, and remains, part of American society to the present day. Did the agency continue to hire women after the Civil War? It was also noteworthy to me that Pinkerton hired at least one person of color and one bi-racial woman during the period covered in your book. Was that something he continued to do?

Chris: The Pinkerton National Detective Agency has always been a progressive operation.  They hired women from all walks of life and color.  Gender or race had no bearing on being hired because all Pinkerton was focused on was solving crimes.  Once Kate Warne introduced the idea of hiring a woman the flood gates were open.  I applaud Pinkerton for taking the chance he did at a time when no one else would have entertained the idea.

History Muse: The women you profile in The Pinks are remarkable women—from the first operative Kate Warne to Mary Edwards Walker, one of the few women to hold a medical degree. Is there one whose work you particularly admire? Do you think the brains and resourcefulness these women showed is rare, or do you think a lot more people (including female people) could do what they did, given the chance?

Chris: Kate’s story is my favorite.  The spunk it took to walk into Pinkerton’s office and announce you are looking for work as a detective is such a bold, admirable act.  She was a versatile agent too.  She could play the part of a [spiritualist] medium or woman in distress very easily.  One of the key ingredients of being a good private investigator is patience.  You have to plan, execute, and wait, wait, wait.  Kate was good at the waiting.  Many people change their minds about the profession because there is so much waiting.  Motion pictures and television make it seem as though the culprit is apprehended in a matter of days, but that’s not usually the case.  Anyone with great patience can excel as a private investigator.

History Muse: What’s next for you? Do you think you’ll be making more use of the extensive Pinkerton archives?

Chris: I have two new books coming out in 2018.  The first is entitled The Principles of Posse Management.  Principles of Posse Management tells the stories of the lawmen and leaders of the Old West who organized citizens in the pursuit of law and order. This collection of tales reveals what Wyatt Earp, Bat Masterson, Buffalo Bill Cody, and other legends of the old west knew about leadership with a clever twist on the classic shoot-em-up, black-hats-vs-white-hats tale.  In the fall the book Killer Bs will be released.  That book is about the B movies made by Republic Pictures.  I am writing a book about Big Nose Kate and about the women who played important roles in building the railroad.

History Muse: I, for one, am really looking forward to reading about Big Nose Kate!

Chris Enss has written more than 20 books about women of the American West: from the outlaws to the mail order brides, prospectors and schoolmarms. Start with her website: www.chrisenss.com

Allan Pinkerton is a fascinating historical figure. Born in the Gorbals, a legendarily poor and tough part of Glasgow, Scotland, he moved to the Chicago area as a young man and set up shop as a cooper—someone who made barrels. While he was out looking for barrel wood he discovered a gang of counterfeiters, took good enough notes to get the gang busted, and then found himself in demand as a crime-solver. He was a staunch abolitionist: his home was used for a while as a stop on the Underground Railroad. There are several biographies to choose from. The one I read was Allan Pinkerton: The First Private Eye.

The one with the most intriguing title is Inventing the Pinkertons: Spies, Sleuths, Mercenaries, and Thugs, dealing with the history of the company in infiltrating labor unions and acting as company thugs or private armies in suppressing activism. Pinkerton was a supporter of the Chartist movement in his youth, so it is intriguing that the company bearing his name became despised by labor unions and their supporters. According to Company-History.com, the Pinkerton agency dropped its anti-labor activities in 1937,in compliance with the Wagner Act.

The Pinkerton Agency still thrives. Although now part of a national conglomerate, in 2014 the company moved its headquarters to Ann Arbor, Michigan, proclaiming that “Our company was born in the Midwest, and we’re very happy to be back where we started.”