The Sweat of Positive People 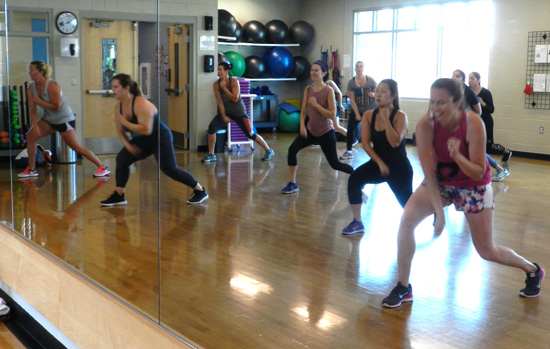 Monday morning at a suburban YMCA. The music starts pumping, 130 beats a minute. Meg Johnson starts the warmup for her Turbo Kick class. “Awright, MONDAYYYY!” and the Monday morning class starts throwing some high rhythmic punches. About 25 of us, mostly women, a few men, ranging in age from 20s to those of us in our 70s, will spend an hour together jumping, kicking, punching, and pumping out Burpees in high-intensity intervals. Some of us will whoop and holler.

All of us will sweat.

Some of us will sweat more than others. I’ve always envied those women who go through an hour of vigorous exercise and look like someone spritzed them lightly with a few drops of silken waters from an exotic spring, because I inevitably look like somebody threw a whole bucket in my face. (And, yes, of course I’m old enough to remember the saying, “Horses sweat. Men perspire. Ladies glow.” I figure if it drips, its sweat.)

A fairly big stir came from one very small study three years ago, one that found that the smell of the sweat of happy people cheered up the people who smelled it, while the smell of unhappy-people-sweat proved to be a downer. Google “swea

t positive people” and you’ll find about a dozen articles on the same subject, in publications ranging from the research journal Psychological Science to Glamour magazine, all based on the same study, conducted in the Netherlands in 2015. Wherein two groups of clean men in clean T-shirts put absorbent pads under their arms and were shown videos of happy, frightening, or neutral subjects, and 36 women later sniffed the pads and declared them more pleasant or less so. They found that the scent of the happier men clearly cheered the women up.

Okay, this is not comprehensive in terms of science. After all, who would pay for extensive studies on this subject? Certainly not deodorant companies. But it’s interesting enough that the article in Slate commented, “The smell of happiness may be contagious.”

Besides, at the end of the class, when we’re all sweaty and smiling and giving each other high-fives, the science is good enough for me.

We humans find great joy in moving together, the way we do in dances, exercise classes, and, yes, armies. Author Barbara Ehrenreich, after she wrote about the history and passions that make war, wrote a fascinating book about public celebrations, Dancing in the Streets: A History of Collective Joy, about the power of group revelry. She wrote: Evolution would have led to stronger neural connections between the motor centers that control motion, the visual centers that report on the motions of others, and the sites of pleasure in the limbic system of the brain. The joy of the rhythmic activity would have helped overcome the fear of confronting predators and other threats, just as marching music has pumped up soldiers in historical times.

The consciousness of the movement of others around us, the joy of rhythmic activity, brings us pleasure and banishes fear. It’s probably mostly the movement, and the connection with others. But I think a little of it is the sweat.

I’m planning to live a healthy, happy life until I’m 100, which is why I call part of my blog Living My Century. I’ve written earlier about the importance of singing in groups and dancing with other people as an important part of staying alert and healthy longer. All of these things—group exercise, social dancing, marching together, choral singing—involve physical exertion, cognitive exercise, and, consciously or not, the scent of sweat.

The power of exercise to boost mood is well documented. I figure if you’re around other people who are making themselves feel better with exercise, just the smell of them will make you feel better, too. There’s evidence that group exercise is more effective in boosting mood than solitary exercise—the most interesting study I found was one using medical students. The context they stated: “Medical school can produce intense psychological distress in its students; however, there is a paucity of research exploring potential means of improving medical students’ well-being.” Group exercise should be just what the doctors ordered.

Our Monday morning class ends with cheers and applause, and we go toward the rest of our days, with red faces, dripping hair, soaked shirts, and, often, big smiles. It could be the vigorous exercise; it could be the moving together, it could be the music. Maybe we’re just happy we got the workout done early. Whatever it is, we’re facing Monday feeling better than most.

And you know, maybe our sweat doesn’t stink.