They Were There: Free Africans and the Age of European Exploration 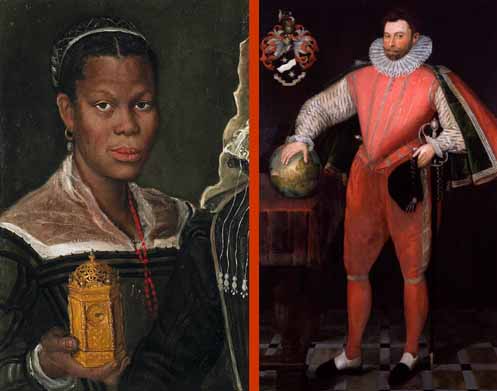 When Francis Drake sailed around the world in the late 1570s, his crew included several freed Africans. As they sailed along the coast of South and Central America, looting silver and other valuables from the Spanish, he seized a woman named Maria, described as a “proper African wench” in a journal kept by a member of the crew. (To put this in context, the expression “proper” likely meant that she was handsome, presentable, good-looking. “Wench” just meant that she was a servant woman, with none of the sly bawdiness that term implies now.)

I’ve been writing a novel with Maria as the central character. My research about Drake has shown me that escaped African slaves played some crucial roles in Drake’s voyage, and in his success. One of them, Diego, was his personal servant, but he was much more than that. He served as a translator, planned some successful raids, and created some crucial alliances.

Diego was a cimarrone, the name given to Africans who escaped Spanish enslavement. He was one of hundreds, if not thousands, of such people, who built home villages in the woods and jungles. Many of them heard that if they could somehow get to England, they would be free. That was largely true, as outlined in Miranda Kaufman’s fascinating book Black Tudors: The Untold Story. Kaufman tells the stories of ten Africans active in Tudor life and explains that no Christian could be held as a slave under English common law. She tells Diego’s whole story: how he escaped slavery near Nombre de Dios, in what is now Panama, how he wheedled his way into Drake’s trust, leading him to join forces with cimarrones to raid the mule trains that brought the Spanish silver and other treasure across Panama from the Pacific.

Diego and other cimarrones built Drake and his men a fortified camp. They served as spies to find out the movements of those shipments. When they had robbed the mule train, the cimarrones wanted none of the silver, or gold, or silks that had come from China. They wanted iron, which was more useful. Drake and his men disassembled two of their smallest ships to give the iron fittings and even the nails to their allies.

All of this took place on the Gulf coast of Central America in 1572 and 1573. By 1577, Diego had been living in England with Drake for four years. As Kaufman writes, it was clear he was a free man. He was paid as a servant, and he was a crew member on Drake’s ship Golden Hind. Word about Drake and his alliance with the cimarrones had clearly spread to western Mexico when Drake arrived there in 1579 on his voyage of exploration.

Cimarrones and the Voyage Around the World

Cimarrones helped him then, telling him where to find fresh water and food, where the Spanish kept their stores of silver. They helped him survive, and they helped him succeed, not only because of what he accomplished previously, but also because the Spanish were hunting them down and burning their villages. At least two other cimarrones joined Drake’s crew, and stayed with him on the ship as it crossed the Pacific.

Diego died shortly after the ship reached what is now Indonesia. Drake left the two cimarrones and Maria, now heavily pregnant, on an island there. That sounds brutal to us, but it was not necessarily the case; the island had food and water, they were left with tools and weapons. The men at least had no wish to go back to Mexico, where their home villages likely no longer existed. There is no record of what Maria might have wanted.

Drake’s attitude toward Africans and slavery may have changed since the days of his youth, when he accompanied his cousin John Hawkins on a slave-trading expedition. Years after his voyage around the world, when he was Sir Francis, he led a raid on Cartagena, in what is now Colombia, in 1586.

He got a lot of help from people the Spanish held as slaves. Joseph Kelly tells the story in Marooned: Jamestown, Shipwreck, and a New History of America’s Origin. —“The Spanish ‘loosed’ their galley slaves from their irons to help defend the city, but the slaves ‘did more damage. . .than’ the English did. The slaves had seen the Spanish bury their valuables, so they knew right where to dig. Just as Drake had planned, African plantation slaves and Moorish galley slaves deserted to the English.” And Cartagena’s maroon community joined the English, too.”

So when Drake left, he took his 20 ships, the Spanish treasure, and hundreds of former slaves when he sailed north along the coasts of what is now North and South Carolina. Kelly continues the story: “In June 1586, sailed with 20 ships, into Roanoke. While he picked up hundreds of Africans and Native Americans in West Indies, Spanish Florida—he did not carry them to England.” Kelly writes that he must have put them ashore somewhere between Santa Helena in South Carolina and Roanoke, where he picked up English settlers who wanted to go home.

Kelly adds:  “Remarkably, they vanish from the historical record, and that record is actually pretty extensive. Once Drake sat down with [governor] to plot out evacuation of Roanoke, no one mentions them again.   .  .hundreds upon hundreds of liberated slaves , have just disappeared. Perhaps that suited them.”

He says that, however you slice it, the first permanent settlement established by the English in North America included these escaped slaves. They got there in 1586, more than 20 years before Jamestown.

Africans sailed on many Spanish and Portuguese ships during this era—two are known to have sailed on Magellan’s voyage around the world, and others sailed with Columbus. Their presence was likely unremarkable, given the continuing Moorish presence on the Iberian peninsula, and their proximity to Africa in the first place.

The Woman in the Picture

And the woman whose picture accompanies this article? Is that Maria? No. The picture was painted by Italian artist Annibale Carracci in about 1585. Pictures of Africans in Europe are not difficult to find, but it’s rare to have one so beautiful. This picture has been referred to as a portrait of a slave woman, but I think that’s an unwarranted assumption. While she is a servant (she’s standing at someone else’s elbow in a larger picture) she is elegantly dressed, with a fine coral necklace, pearl earrings, and what appears to be a delicate silver hairband. She has needles in her bodice, which would imply that she was a dressmaker.

Meet her eyes and look at her direct gaze. I don’t think that woman was anybody’s slave. I’d love to know her story, but it’s probably lost. After all, our historical narrative has had no place for her.

Love Tudor history? Interested in the role of free Africans in English life more than 400 years ago? Or just like finding out about interesting people? Click on the link for a little more about Miranda Kaufman’s book Black Tudors and how she came to write it.

I’ve written before about how “the historical narrative” leaves out people who belong in it: Mythology and the African American Cowboy, for example. Also about some important misapprehensions about how and why Africans arrived in Jamestown in 1619: Slavery, Indenture, and My Family.