They’re Not ALL Bodice-Rippers 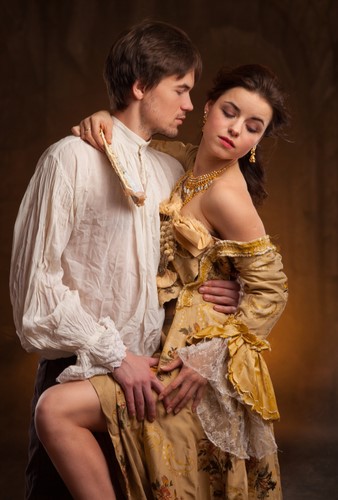 When I told a friend of mine I was writing a historical novel, she got a naughty gleam in her eye and asked, “When does the first bodice get ripped?”

When I started telling her it was really more about truth, power, and the cross-currents of history, her eyes glazed over.

I can’t really blame her. The bodice-ripper genre is lusty in more ways than one: lots of people have fun reading it. Some good writers write it. It’s been around for a long time, and will probably go on for a lot longer. Some of the older ones have situations we now see as abusive, and newer writers have to work with knowledge of that. Still, for many women, it’s a perfect fantasy: a female central character, lots of passion, and great clothes.

Would you call War and Peace a Bodice Ripper?

War and Peace is a historical novel, about the lives of five families swept up in Napoleon’s invasion of Russia in 1805. Mind you, Tolstoy said it wasn’t a novel at all, since great Russian literature did not conform to standards, but we don’t know what else to call it. Tolstoy had read the standard histories about the Napoleonic Wars, and used his work to challenge those historical approaches. I think a historical novel brings alive the history of a time by showing the impact of historic events on real people, as represented by characters in the novel. Some of the characters can, of course, be real people.

I personally would not call War and Peace a bodice-ripper.

I wouldn’t call Gone With the Wind a bodice-ripper either, although it has some elements of one. GWTW showed us one important thing historical novels can do—create mythology. We have a persistent set of myths about the American Civil War and Reconstruction: Southern whites were all plantation owners before “The War.” All the women were beautiful and spirited. All the men were gallant. African-Americans were nominally slaves, but they were really happy, good-hearted people who did the work of servants, and incidentally provided sensible advice and comic relief. All the white people who supported Reconstruction were sniveling weasels, and white vigilantism (read Ku Klux Klan) was a justifiable reaction after the slaves were freed. That’s a persistent set of myths in our American canon, and, while it has had other sources, the book and the movie of Gone With the Wind were powerful voices in that storytelling.

What Makes a Novel “Historical”?

My friend Leslie recently complained that her unpublished novel set in 1960s Swinging London will probably be a historical novel by the time she gets it published. Well, Leslie, it may be close. The Walter Scott Prize for historical fiction specifies that the events of the novel must have taken place more than 60 years ago. Just for the record, Leslie’s book doesn’t qualify as a bodice-ripper, although she writes terrific sex scenes. And, of course, “miniskirt ripper” doesn’t carry the same panache.

I consider some novels that don’t make the 60-year cut to be historical novels. Grapes of Wrath is a prime example. If you want to understand what made the Dust Bowl disaster of the 1930s, the struggles and injustices people faced just because they wanted scratch out a living someplace, Steinbeck’s book will do that for you, even if it was published in 1939. I also think To Kill a Mockingbird is a historical novel, even though Harper Lee wrote it only 25 years after the time the novel took place. I think any fiction that explores history on a personal level is historical fiction.

James Wood of The New Yorker scoffed that historical fiction is “a somewhat gimcrack genre not exactly jammed with greatness.”

Great stories make history come alive, make it memorable. Historical novels are well represented on lots of lists of the best novels of all time. The most intriguing list to me was Library Journal’s list of the most influential fiction of the 20th century. High on this list are some of the books I’ve already mentioned, plus others I think of as historical novels: Beloved, The Color Purple, The Good Earth, and Lonesome Dove.

The Library Journal’s list was published on the Harris County (Texas) Public Library site. I couldn’t find it on the Library Journal site. The list was compiled in 1998, and I noted that it didn’t include the Harry Potter series, which was published in 1997. Yes, I do know Harry Potter is not historical fiction, but I would argue it has been influential. The list is fun to browse, and can give you some great ideas for satisfying reading.

My personal favorite blogger on historical fiction is M.K Tod, A Writer of History. Tod has been at this for a while, and she does a lot more than blog. She takes reader surveys, keeps up on developments in the field, and a few years ago, published an excellent list of readers’ favorite historical fiction authors in the Washington Independent Review of Books.

I also like Sarah Johnson’s Reading the Past where she recently listed some great historical fiction about women in sciences.

The Historical Novel Society, based in the U.S. and the U.K., with members all over the world, has a fairly comprehensive picture of what’s going on in the world of historical fiction.

Read any good blogs lately? Or historical fiction? How about bodice-rippers? Contact me and let me know about it.

Previous Next
May 15th, 2017|History and Historical Fiction|2 Comments