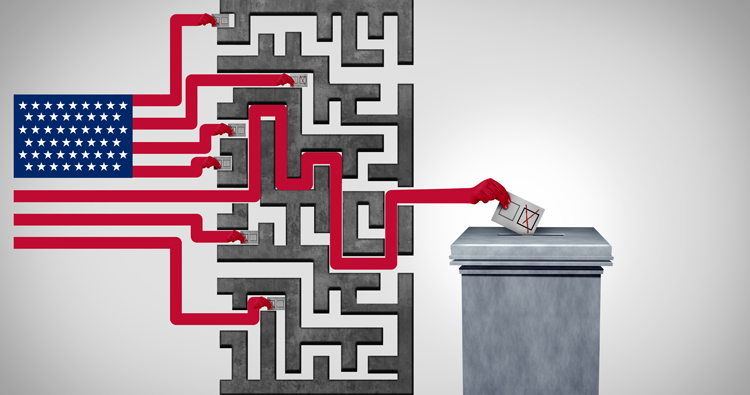 As I said in Part 1, I grew up in Memphis, Tennessee, after “Boss” Crump had passed away. The vestiges of his machine still lingered. So did old-time politics in the rest of Shelby County. Allegations of voter fraud were a constant background noise.

My mother was involved in local Memphis politics from the late 50s until 1969. She had grown up in Chicago when it was dominated by a powerful, corrupt machine run by Mayor Edward Kelly and Cook County Democratic Chairman Patrick Nash.

I Heard the Stories

I heard the stories about dishonest elections in Chicago and in Memphis. We heard that you could jam a voting machine with a rubber band and a wooden match stick, which would fall out if election observers opened up the machine—and who would be any the wiser if there was a match on the floor? People said school buses filled with Black field workers were invading Shelby County, stopping at multiple polling places to cast fraudulent votes. Others told the story that local sharecroppers in northern reaches of the county had to enter the polling place through a tent (there were of course separate entrances for Black and white voters) where they were told who to vote for.

My dad spent some time with a camera at polling places where they suspected foul play, taking one series of pictures that showed a poll watcher going into a voting booth with a voter who appeared able bodied. Two people in a booth was against the law, unless the voter was illiterate or could not physically work the levers.

I was in college when a group of us went down to the offices of the Shelby County Election Commission to look through their voter registration files. I don’t remember what year it was, but, in retrospect, I think it was the late 1960s, after the Voting Rights Act had passed, and there were surges in numbers of Black voters. Our search was perfectly legal, although it annoyed and upset the employees there. My assignment was to look through the voter registration card files looking for anomalies, such as an unusual name that was repeated over and over.

I found one. There seemed to be a lot of women named “Queen Esther,” which my mom and I agreed was an unusual name. I dutifully went through thousands of cards, noting addresses and ages of dozens of Queen Esthers.

We came out of our investigation with no real evidence of fraud. The conclusion in my case was that Queen Esther was a much more common name than we’d thought. All the Queen Esthers seemed to be different women, and all properly registered.

Many years later, I was thinking up a name for a resourceful and sassy Black woman, a character in my novel, The Monk Woman’s Daughter. I decided to name her Queen Esther. A member of my writing group said that nobody was named that, and it was offensive to give a Black person such a name. I told him the story of me and the voter registration cards, and kept the name. I have yet to learn why there would be a lot of women named Queen Esther. If you know, please leave me a comment.

Changing Times – Then and Now

I didn’t realize that the drawers full of voter registration cards, neatly filled out and filed in an orderly way, were an indicator of what was changing in the way people in American run elections. The keeping of orderly data, like the city directory I mentioned in Part I, made it harder to have the same person vote more than once. The widespread use of the secret ballot meant voters were less vulnerable to intimidation. Voting machines, which Shelby County only got in 1958, gave an extra layer of privacy. I also think that civil service laws and regulations made it harder to give away jobs in exchange for votes.

That doesn’t mean there was no fraud, especially in aid of voter suppression.

In 1966, Memphis had elected its first Republican congressman since Reconstruction, Dan Kuykendall. My mom probably worked to get him elected; maybe I did, too, but I don’t remember for sure. This was in that short window of time when the Democrats were shifting from staunch supporters of segregation to the party that passed major civil rights legislation, when Nixon’s Southern Strategy brought racist whites into the Republican Party.

I remember Kuykendall as an intelligent, capable man and voluble speaker. (He got the nickname “The Tennessee Talking Horse” in Congress.) He had said during the campaign, “The only thing that can beat me is just simple arithmetic, voter turnout.” He was a white man running against a Black man, Harold Ford.

On election night, it looked like he had won. In fact, he was making a victory speech on television when word came that he had lost. Ford supporters had found eight boxes of uncounted ballots. The ballots they contained were marked overwhelmingly for Ford, and he won. Memphis has not had a Republican congressman since.

My parents had moved away from Memphis, and so had I. I remember talking with my mom about this, and asked her what her friends were saying. She sighed, and said they were chattering about an obvious fraud by the Ford organization. Nobody, they said, would really believe those votes would go almost 100% for Harold Ford. “I found out which precincts they were from,” she added. “And, yes, those precincts would go 100% for Ford.”

Some accounts say the boxes were found in a dumpster behind the Shelby County Election Commission. That’s possible. The Commission was 100% white at the time.

In the years since then, I’ve often reconsidered old stories of voter fraud, and I’ve come to discount anything that wasn’t a first-hand story or really well documented. (That story about busloads of Black field workers voting in various places in Shelby County, for example. Did anyone actually see them? Isn’t it fairly unlikely that such busloads would get a lot of attention from locals? Maybe the police? Would they really go undocumented?) Even the pictures my dad took were too few, too inconclusive, to count as evidence.

After the November 2020 election, a National Geographic feature trumpeted: “Voter fraud used to be rampant. Now it’s an anomaly.” Donald Trump and his supporters, for all the noise they have made, have yet to produce an instance of voter fraud sufficient to change an election.

The Heritage Foundation went looking for instances of voter fraud, and its Voter Fraud Database has details on 1,317 cases of voter fraud in American elections dating back to 2001. That’s fewer than 1500 cases out of hundreds of millions of votes cast in those years. They call it a “sampling.” Here’s my reaction: the Heritage Foundation is not a bunch of slackers or dummies, and, as a conservative think tank, they had every motivation to look as hard as they could for all the voter fraud they could find, and this is all they came up with.

The database is entertaining to use, with a U.S. map laid out so you can look at detail on each case state by state. My home state of Tennessee has 10 cases listed, dating back to 2005. They include the case of Vancey Voorhees. She submitted a ballot for her cousin, and got charged with four separate crimes. Brian “Wormy” Hodge got convicted of vote-buying. The court found that he and an accomplice had paid $20-40 per vote. Hodge got five years of probation and 50 hours of community service. And I’d love to know why people call him Wormy.

The Brennan Center for Justice published a rebuttal to the Heritage Foundation, The Myth of Voter Fraud, asserting, “Extensive research reveals that fraud is very rare. Yet repeated, false allegations of fraud can make it harder for millions of eligible Americans to participate in elections.”

It may be a lot harder to stuff a ballot box than it used to be. It may be harder to convincingly claim to be three, four, or five different people on election day.

But we still have people who figure they have to cheat in order to win. The Brennan Center’s Voting Laws Roundup for March outlines bills moving through the state legislatures that would restrict mail-in or absentee ballots, curtail voting hours, decrease the numbers of polling places. Georgia’s new law allows “mass challenges” to voter eligibility. One person can come to a county clerk’s office and seek to have an unlimited number of voters removed from the voter rolls for being ineligible. Never mind that such an action violates the National Voting Rights Act.

People who know they can’t win on a level playing field are endlessly inventive. We’ve gone from the days of whiskey-barrel voting, to ballot box stuffing, to repeat voting. Now it’s getting harder for them to inflate the votes on their own side, so they simply suppress the votes on the other side.

We’ll have lots more about voter suppression as this election cycle moves on.

As I was looking at the Heritage Foundation’s Voter Fraud Database, I checked to see if the chicanery that got the 2018 Ninth Congressional district election in North Carolina decertified was there. It is: “Officials became suspicious when 61% of the vote-by-mail ballots were cast for the Republican candidate, despite the fact that only 16% of the mail-by-ballot were registered Republicans.” What it’s missing is the name of the GOP operative (Leslie) McCrae Dowless, who reportedly got his co-conspirators to certify, falsely, that they had seen a voter vote by absentee ballot, and improperly mail in absentee ballots for someone who had not mailed it themselves. I found no evidence that he has been convicted. He has since been indicted for Social Security fraud. Last year Dowless ran for re-election to the Bladen County Water and Soil Conservation district. He won. He’s listed on the district’s website as vice-president. (As Leo Rosten said, “Truth is stranger than fiction. Fiction has to make sense.)

There are several good lists of books about America’s voting history: Teen Vogue put out a provocative list. And if you don’t think of Teen Vogue as a place to find political commentary, you haven’t been paying attention. If you have a book to suggest, please put your suggestion in the comments below. And sign up for my mailing list!