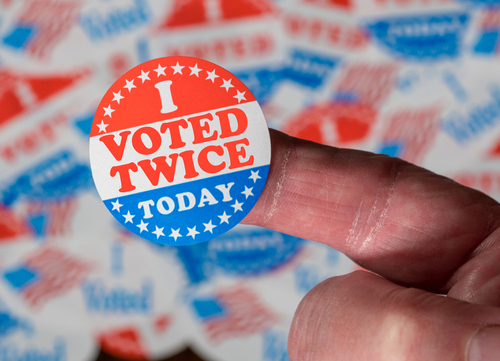 Voter fraud and political machines have a wild and colorful history in this country. When I first drafted this essay I was planning to highlight my own meager experience evaluating accusations of voter fraud. As I dug deeper, I began to see how my stories fit into the larger historical picture, the one that formed our ideas about what voter fraud is, how it’s been perpetrated, and how times have changed.

The essay grew into two parts.

That’s partly because our history of electoral skullduggery is so much fun to read about. Where else will you meet the Plug Uglies of Baltimore or Brian “Wormy” Hodge of Tennessee? Where else will you learn the ingenious tactics of rolling a whiskey barrel to the polls or having a man visit a barber repeatedly so he can vote as five different people?

The Beginning: Ballots and Brawling

Voting didn’t used to be the private act it is now. From the beginning of the republic at least through the Civil War, elections were public events. Very often one side or another, or both, simply rolled whiskey barrels to the polls and invited all supporters to partake. Governments didn’t print up the ballots. Political parties did, and it was easy to tell which ballot a man had. Only the bravest—or most foolhardy—would cast an unpopular vote. The system was wide open for abuse and intimidation.

I’ll just give one example. Electoral politics in Baltimore were notoriously violent in the 1850s, when the city was known as “Mob Town.” American nativist gangs like the Plug Uglies and the American Rattlers, and the Democratic Irish Bloody Eights famously “cooped” large numbers of voters. They’d basically kidnap a man, give him plenty to drink, and have him vote in three or four places. It had to be a white man, of course, because nobody else could vote. Things frequently got rough, but it was pleasant work for the right sort of man. After all, who wouldn’t want free booze?

There’s extensive documentation on cooping. I used some of it in my book The Monk Woman’s Daughter. I even repeated the rumor that it’s the way Edgar Allan Poe died, a rumor that persists to this day.

One change that got rid of a lot of the customary brawls was the change to voting by a secret, or “Australian,” ballot. The state of Massachusetts started working toward having a secret ballot in 1850, and other states eventually followed suit. I say “eventually,” because it took 100 years. In 1950, South Carolina became the last state in the union to adopt a secret ballot.

But even a system of voting by secret ballot was open to abuse and intimidation from political machines.

The tide of immigration to American cities, by people from other countries and other parts of the United States, was the fuel for the growth of political machines. They dominated many American cities from the mid-19th century until the 1960s. The basis of their power is simple enough. New arrivals who inundated American cities needed jobs, housing, sewers, schools, public health and safety. Political machines helped provide those things, in return for votes and other support.

And a fast-growing city was not like a small town where everybody knew everybody else. Soon, of course, it was more about power than about public service.

Tammany Hall in New York City may be the most famous machine, and the longest lasting, from 1789 until the 1950s. Irish immigrants forced the group to admit them as members in 1817, and in the 1820s Tammany successfully fought to extend voting to all white males and maintained the support of the Irish, and were power players in New York City, until the 1960s

There are lots about Big Tim Sullivan, also called “Dry Dollar Sullivan”, who boasted of balloting by barber:

“When you’ve voted ’em with their whiskers on, you take ’em to a barber and scrape off the chin fringe Then you vote ’em again with the side lilacs and a mustache. Then to a barber again, off comes the sides and you vote ’em a third time with the mustache. If that ain’t enough and the box can stand a few more ballots, clean off the mustache and vote ’em plain face. That makes every one of em good for four votes.”

If anyone disagreed, there were always the brawlers. One man who voted against Tammany in the 1856 election had his nose shot off. And even though all the voters had to be male, that wasn’t true of the brawlers. Hell-Cat Maggie reportedly filed her front teeth to points and had long artificial nails made of brass. Big Battle Annie, the sweetheart of Hell’s Kitchen, commanded the Battle Row Ladies’ Social and Athletic Club.

The Importance of Data

Reformers fought Tammany for more than a century, and there were many factors that finally ended its domination. One was the creation of a city directory.

The directory was the creation of an out-of-town political boss, Senator Matthew Quay of Pennsylvania, who in 1888 was chairman of the Republican National Committee. Quay was convinced that Grover Cleveland had won the 1884 election because of Tammany’s manipulation of votes. He noted that one part of the city’s sixth ward, for example, with a population of 850, produced 934 votes. According to Quay, that was more votes than the division’s combined population of “men, women, children…and dogs.”

Quay set up an office in Manhattan, ostensibly to compile a city directory for business purposes. For months, Quay’s agents quietly canvassed the streets of New York, and compiled a comprehensive list of every eligible voter. Two weeks before, Quay announced the accomplishment right before the election, saying, “If any fraud is attempted on election day, we are not only in position to detect it, but we will see to it that the guilty go to prison.”

They didn’t win the city, but Cleveland’s margin of victory was so slim that Benjamin Harrison won the state, and the presidency.

It wasn’t just New York City that had a machine. There’s a great site giving accounts of ten of the biggest ones, including Curley in Boston, Daley in Chicago, Long of Louisiana.

The first name on the list is E.H. Crump.

Edward Hull Crump was known nationwide as “Boss” Crump. He didn’t like being called that. In Memphis he was Mr.” Crump, and he ran Memphis from World War I until 1948. Memphis under Crump did not have the record of Black voter suppression that many other areas in the South had. They were an important support for his machine.

According to an article in Historic Memphis, “[H]e was particularly adept in the use of what were the two politically weak minority groups in Tennessee – blacks and Republicans. Unlike most Southern Democrats of his time, Crump was not opposed to blacks voting in Memphis and they, for the most part, were reliable Crump machine voters. A relationship developed in which they aided him and he aided them. He also skillfully manipulated Republicans, who were numerically very weak in Tennessee.” In fact, in Memphis, the Republican party until the mid-1960s was run by Black politicians.

Crump tried once to become Sheriff of Shelby County, where Memphis is, as well as Mayor of Memphis. When a court ruled he couldn’t do that, he organized a write-in vote campaign for John Reichman for sheriff. According to the website Political Bosses and Machines in the US, “This involved not only persuading literate voters to write in this name but also teaching illiterate voters to write this name[Reichman]. The name had to be spelled correctly to count. Despite the odds, Crump organization was successful. Years later there were blacks in Memphis who could spell only one word—’Reichman.’”

And that’s where Part 2 begins.

If you want to dig in deep to the Plug Uglies, Hanging Henry Gambrill: The Violent Career of Baltimore’s Plug Uglies, 1854-1860.\Author Tracy Melton used contemporary newspapers, court records, and lots of other original sources.

About Tammany Hall, I like Machine Made: Tammany Hall and the Creation of Modern American Politics, because it shows how this machine, and by extension others, developed social services and protections against nativist violence as well as showing the corruption.

National Geographic did an excellent analysis, “Voter Fraud Used to Be Rampant. Now It’s an Anomaly,” right after the 2020 election.