When War Lasts a Lifetime 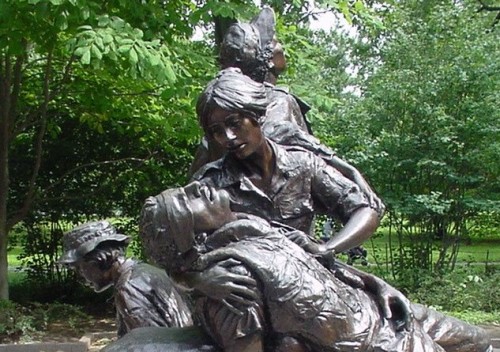 An Army nurse comforts a dying soldier. Detail from the Vietnam Women’s Memorial in Washington, DC.

The Vietnam War continues to haunt Americans old enough to have fought or suffered in it. It still divides us politically: did you serve in the war, did you oppose it, were you well-connected enough to serve but not go? Did you lose a brother, a father, a son? Were you one of the million or so Vietnamese refugees who became Americans?

Most men my age can still tell you what their number was in the draft lottery. In my work at the Real Change homeless empowerment project, I meet Vietnam-era vets whose post-traumatic stress syndrome cost them their families, jobs, homes, and maybe their sanity.

In Lynn Kanter’s novel Her Own Vietnam, we move back and forth between 2003 and 1969 with Della Brown, a nurse who served with the Army in Vietnam.  Kanter provides vivid descriptions of what nurses did after a “mass-cal,” a mass casualty situation, as Della carefully tends the stumps of a young man’s legs, then reacts quickly when another young man’s burns from white phosphorous begin to smoke and burn again, neutralizing the phosphorous as he screams in agony. The same day she goes on body-bag duty, going through each dead man’s pockets to itemize his possessions, bagging and tagging the body,  rounding up leftover body parts and matching them as best they could.

Years later, Della has put together a career as a nurse, but her experiences in Vietnam continue to haunt her life. She has had a long battle with alcoholism, which she has won for the time being. She still has sleepless nights: “three years into a new century and Della was still fighting an ancient war.” And a letter from her best Vietnam friend, Charlene, triggers a new series of nightmares for her.

Kanter says the starting point for the book was not someone she knew, but simply a sudden inspiration. “I was walking down the street one day, and it occurred to me out of the blue to wonder what it would feel like to be a middle-aged woman, just living your ordinary life, but to have the experience of the Vietnam war in your past? Would you talk about it? Who would you tell? Could you possibly make them understand?”

It’s clear that Della can’t get the people in her life to understand, not completely. Her ex-husband tells her bluntly that she couldn’t possibly have PTSD because she wasn’t in combat. There are other difficulties for Della dealing with it. For one thing, it comes and goes. As she’s arranging flowers with a friend, she says, “I don’t always have it. I’ve gone for years without a twinge. But then something happens and—“

As Kanter makes clear in her book, there was no recognition that someone like Della would have PTSD.  Kanter pointed out to me that even the male veterans had to fight to get that diagnosis recognized, and that didn’t happen until 1980. “Vietnam veterans who struggled to acclimate to civilian life were considered to be lazy or malingering, despite the fact that they suffered from a remarkably consistent cluster of symptoms.” For the women, the situation was worse. There was very little research that included the women.  Della finds there is little help for her; the veterans’ therapy groups are all men, and there is nothing for women who have experienced a war. Kanter points out that it was 2011 when, “the  U.S. Department of Veteran Affairs admitted that, ‘Little is known about the long-term health and mental health status of women Vietnam Era Veterans. For many of these women, the effects of this war are still present in their daily lives.’”

The findings were published in 2014, after Kanter had finished her book. Still, she says, “The survey found that 20.1% of women who served in Vietnam developed PTSD – about double the estimated rate of PTSD among non-veteran women. The researchers concluded, ‘the prevalence of PTSD for women who served in Vietnam was higher than previously documented… The results suggest that the mental health effects of Vietnam-era service among women Veterans can be long-lasting.’”

Her Own Vietnam is not all grim, and certainly not institutional. One of Della’s memories is that women’s sanitary supplies were scarce, and the women used bandages instead. And the few tampons that did get shipped in were grabbed up by the troops, who used them to clean their M-16s.

Della’s mother Ruth tries to tell her, “[War] is not personal. It’s not aimed at you.”

Her Own Vietnam does not fit any definitions of a historical novel—even my own very stretchy one! But it does show us how the grand sweep of history affects each of us on a personal level, and it’s a compelling and insightful read.

Lynn Kanter is a freelance writer for for national progressive organizations.  She blogs at www.lynnkanter.com.  Her Own Vietnam will soon be published as an audiobook, voiced by Robin Miles.

Several years ago, I was in a writers’ group with Tom Glenn, who was an intelligence operative in Saigon in the last years of the war. I got to read his recently published novel, The Last of the Annamese, in draft form, and can recommend it for its suspense and its deep understanding of the nature of loss. I went to check Tom’s web site to see what he was doing now, and found a recent blog entry, apparently the first of a series, “My Children and Vietnam.”

And, coming in September, is a 10-part PBS Ken Burns series, The Vietnam War. Sure to have plenty of interviews about the personal nature of that war for many different people.

I let Tom know that I’d referenced his work in my blog. His reply was gracious, and he had something important he wanted to add:

“I don’t call it PTSD. I call it PTSI, for Post-Traumatic Stress Injury, because it’s obvious to me as a sufferer that the ailment is not the mind gone awry internally but an externally inflicted wound. The author Ron Capps calls is a moral wound and a wound to the soul. It’s what happens to the human psyche when it’s subjected to events so ghastly that the soul is permanently damaged. It never  goes away, and it never weakens. If not confronted, it lingers in nightmares, panic attacks, irrational rages, and flashbacks. And it gets worse as one ages.

“When I first realized I was stricken, in May 1975 after I returned to the U.S. after the fall of Saigon, I still had top secret codeword-plus clearances. Had I gone for psychotherapy, I would have lost my clearances and my job. So I sweated it out. I learned the hard way that the victim has to confront the memories and bring them into consciousness and learn to live with them. It turns out that writing down what happened is one of the most effective treatments. I also discovered that helping others worse off than myself pushed my problem into the background. I worked with AIDS patients, the homeless, the dying in a hospice, and finally sick and dying soldiers in a VA hospital. Compassion heals.
“I’ve written several pieces on the disease in the blog. You can find them by entering “PTSI”  the search box.”
Previous Next
July 25th, 2017|History and Historical Fiction, Living My Century|0 Comments