We Can’t Blame It All on the South 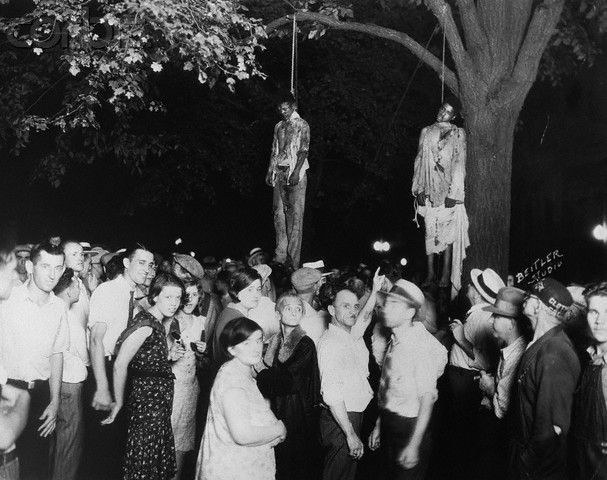 The gut-churning image is all too familiar. Two black men hanging dead from a tall tree, with white people pointing meaningfully, grinning for the camera, even one young couple who look like they’re on a date. This photo of the 1930 lynching of Thomas Shipp and Abram Smith inspired the song “Strange Fruit,” made famous by Billie Holiday, with the line, “Pastoral scene of the gallant South, the bulging eyes and the twisted mouth. . .”  Many such scenes took place in the old Confederacy, but not this one. This was in Marion, Indiana, which isn’t even in southern Indiana, but in the north, between Indianapolis and South Bend. Indiana is, by the way, a longtime stronghold of the Ku Klux Klan.

Is it Nastiness, or Percentages?

Michael Harriott of The Root wrote a provocative column late last year, “Is the South More Racist Than Other Parts of the U.S.?” (He writes a lot of provocative columns on such subjects—describes himself as “world-renowned wypipologist.” Yes, I had to look it up. He studies white people.) He asked the same question I did: Have there been more incidents of racial injustice in the South because the white people are inherently nastier, or is it simply because the black population was larger? And he came to the conclusion that, boiled down that way, it’s because the black population is proportionately larger. Black people in the South are proportionately less likely to die at the hands of police, less likely to be incarcerated, less likely to be in all-black schools than black children elsewhere.  And, as The Washington Post let us know a while back, the most segregated schools are not in the South.  This isn’t something for anybody to feel good about, but maybe the rest of us white folks can stop pointing our self-righteous fingers at the South.

Here in the Pacific Northwest, many residents are proud of the area’s enlightened image, and believe that people here are kinder and less race-conscious than people elsewhere. This requires a certain historical amnesia. When Oregon set up its first provisional government in 1844, it included laws excluding black people. Slaves brought into Oregon had to be freed within three years, but after that men had to leave within two years, women within three, or they would be whipped, “[U]pon his or her bare back not less than twenty nor more than thirty-nine stripes, to be inflicted by the constable of the proper county.” When Oregon became a state, it wrote into its constitution that black people couldn’t live there, a law that survived the Civil War as well as the passage of the 13th,14th, and 15th amendments, which were designed to expunge the evils of slavery. It survived past World War I. Less than 20 years later, during World War II, a young black cook for the Southern Pacific Railway, Robert E. Lee Folkes, was arrested and charged with the stabbing murder of a white woman on board the train. As Max Geier outlined in his book The Color of Night, there was an obvious white suspect, Fowlkes had no blood on his clothes, there were no knives missing from his kit, and the police never found a murder weapon. He was nonetheless put on trial, found guilty and executed.

The Seattle area has a history, too. There’s excellent browsing on this subject in the University of Washington’s Civil Rights and Labor History Project, which has a special section on Segregated Seattle. Here you can find out about the popular restaurant the Coon Chicken Inn, and how restrictive covenants blanketed the area, a partial explanation for why so much of the city is so white. I also discovered that it was only in—get this—2006 that made it easier for neighborhoods governed by homeowners associations to rid themselves of racial restrictive covenants. And, see, that’s if they want to do it. I don’t know, as of this writing, if there are still homeowners associations in this area who still can legally prohibit home purchases by people of color.

There is some bright news here: this spring, a white schoolgirl named Sarah Haycox campaigned—successfully—to have a new childhood education center named for Edwin Pratt. Many people in Shoreline wondered what that was all about. Maybe now more of us know.

The National Memorial for Peace and Justice opened in April in Montgomery, Alabama. It is “the nation’s first memorial dedicated to the legacy of enslaved black people, people terrorized by lynching, African Americans humiliated by racial segregation and Jim Crow, and people of color burdened with contemporary presumptions of guilt and police violence.” The exhibit on lynching covers six acres. It has 800 separate installations, representing the 800 counties where more than 4,000 lynchings took place between 1877 and 1950. The expressed hope is that the counties will come claim their legacy.

In 2017, a man with a knife started harassing two women of color on the Portland, Oregon, transit system. Three men intervened, and the man with a knife killed two of them. A New York Times article outlined the history of racist laws in Oregon.

The three who intervened deserve to be remembered. Here’s a profile.

There is more to know about the lynching of Thomas Shipp and Abram Smith.

If you want an excellent primer on changing the system, I recommend Uprooting Racism: How White People Can Work for Racial Justice (4th edition) by Paul Kivel. I reviewed it for Real Change.