What Hanukkah Shows Us All 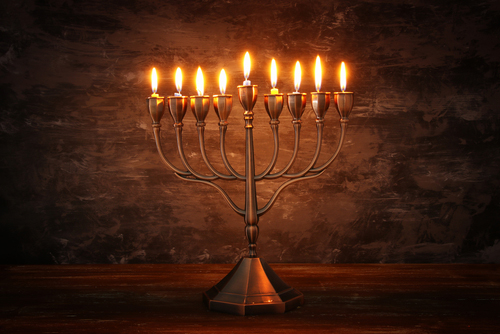 Many of us, Jew and gentile, know the traditional Hanukkah story: a group of Jews called the Maccabees revolted against oppressive rulers who had unjustly and cruelly killed their people and profaned their holy temple in Jerusalem.  The Maccabees rose up and defeated their oppressors. To cleanse and re-dedicate the temple, they needed to have the temple lights burn for eight days, and they only had oil enough for one day. They lit the temple lights anyway, and lo! The lights burned for eight days.

Hanukkah fits the profile of what comedian Alan King called the summary of every Jewish holiday: “They tried to kill us. We won. Let’s eat.”

How Do We Know What Happened?

The best known accounts of the story are in the books of 1 & 2 Maccabees, which may or may not be in a Bible near you. They are part of a group of books called the Apocrypha, or deuterocanonical books—meaning basically that some people thought they belonged in the Bible, and other people didn’t.  They are not a central part of Jewish religious literature; they are usually included in Catholic and orthodox translations of the Bible, but are often not included in English-language Bibles. They were originally included in the King James version, but when the Puritans were in power in 17th-century England, they took those books out. The most commonly used Bible in the United States for many years was that Puritan-influenced version of the King James Bible. It’s the version distributed by the Gideons, who leave Bibles in hotel rooms, and may have distributed them at your elementary school, if you’re as old as I am.

What Was Going On?

As 1 Maccabees explains, when Alexander the Great conquered the Persian Empire in 333 BCE, it contained ancient Judah and Israel. After he died, his empire was partitioned by his generals, whose families ruled the areas for a few centuries. And, as 1 Maccabees describes, many of the Jews became Hellenized: that is, they adopted some Greek customs. (The writer reports with breathless horror, that they built a gymnasium in Jerusalem and removed the marks of circumcision.)

Fast-forward about 170 years, to the rule of king Antiochus IV. He “arrogantly entered the sanctuary and took the golden altar,” as well as a large number of gold and silver utensils used in worship. A few years later his officers plundered the city and took captive women, children, and livestock, and then decreed that “all people should give up their particular customs.”

A priest named Mattathias was particularly singled out. He and his sons were told to offer sacrifice to gods they did not worship. They refused, and their refusal led to rebellion. Mattathias’ son Judas led the successful rebellion.  It is not clear to me when he was called Maccabeus, which many translate as “hammer,” or when his followers came to be called Maccabees.

Who Were the Maccabees?

The mythology that has come to surround Hanukkah presents the Maccabees as pious people who waged guerrilla warfare so they could worship as they thought was right, and that their opponents were evil oppressors. Part of this is true: Antiochus was a ruthless and oppressive ruler whose armies killed thousands and enslaved thousands more. Both Jewish and Hellenic sources agree on that. But the Maccabees may have been a faction in a civil war in which reactionary Jews from the countryside fought against more cosmopolitan Jews in the cities. 1 Maccabees says, “Mattathias and his friends went around and tore down all the altars [of other religions]; they forcibly circumcised all the uncircumcised boys that they found within the borders of Israel.”

Probably not people you would want for neighbors.

How About that Eight-Day Miracle?

Here’s what 1 Maccabees says about the rededication of the temple:  “Early in the morning on the twenty-fifth day of the ninth month, which is the month of Chislev, in the one hundred and forty-eighth year, they rose and offered sacrifice, as the law directs, on the new altar of burnt-offering that they had built.  At the very season and on the very day that the Gentiles had profaned it, it was dedicated with songs and harps and lutes and cymbals. All the people fell on their faces and worshipped and blessed Heaven, who had prospered them.  So they celebrated the dedication of the altar for eight days, and joyfully offered burnt-offerings; they offered a sacrifice of well-being and a thanksgiving-offering.”

What’s missing from this description is any mention of a one-day supply of oil burning for eight days.

Jewish biblical scholar Shawna Dolansky points out that the first known mention of this story came in the Talmud about 600 years later. “Scholars don’t know why this story appears at this time, and suspect that its supernatural nature was intended to legitimize a holiday born of human zealotry — a type of fanaticism that the rabbis were very uncomfortable with and in fact treated very harshly — to give a reason, based on God’s power rather than human power, to observe an eight-day celebration that includes religious festival prayers.”

In the ensuing centuries, Hanukkah encountered Christmas, and the encounter was especially transforming when Jewish children encountered the commercial Christmas culture of the United States.  So the dedication of the temple—Hanukkah means “dedication”—becomes an occasion for eating, singing, family gatherings and, sometimes, a massive exchange of gifts.

Rabbi Jonathan Sacks, a prominent British social philosopher and proponent of interfaith dialogue, posted recently about Hanukkah: “History itself has a history. The way that events seem to mean at the time very often change as we see them in retrospect. We don’t always understand the real significance of an event until many decades later or sometimes even centuries.”

He says, and I agree, that the significance of Hanukkah has changed. Sacks wrote in an earlier essay, “Though my faith is not yours, and yours is not mine, if we are each free to light our own flame, we can banish some of the darkness of this world.”

Here’s what I think Hanukkah says to me, and to anyone else who is trying to make this world a better place: There is so much to do, and so often when the resources we have do not seem equal to the task. There are too many hungry and homeless people, too much injustice, too much ignorance.

Don’t let that stop you. Take the resources you have, and fire them up.

And may your light shine across the ages.

Even though the Shana Dolansky article I found is six years old, it’s well worth reading: “The Truth(s) About Hanukkah”

Ha’aretz, the large Israeli newspaper published in both Hebrew and English, has an update on Hanukkah’s history this year, “The Revolt of the Maccabees: The True Story Behind Hanukkah.”

One of my favorite historical novels is James Michener’s The Source, which tells the story of Israel from Paleolithic times to the 1960s, through exploration of what happened at a fictional site excavated by archeologists. One of the episodes is the story of a devout and determined old Jew who kills his son because the son joined the gymnasium and had his circumcision reversed. When I first read the story, I thought it was bizarre. Interesting to find out it was not total invention.