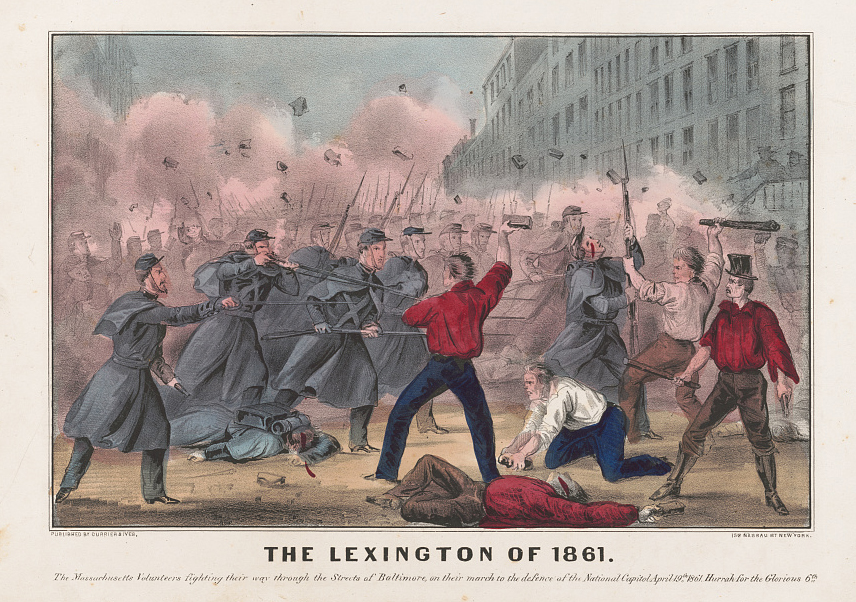 Print from Library of Congress

These are agricultural products, not human beings.

States choose state symbols to represent to the world who and what they are. If we were to judge Maryland by its state song, we would conclude that Marylanders despise President Abraham Lincoln, detest people from the north, and revere rioters who attacked Union soldiers in the streets of Baltimore in 1861. The state has apparently felt that way since 1939, when “Maryland, My Maryland” was adopted as the state song. Successive legislatures have rebuffed multiple attempts to get rid of it.

People who want to change it are trying again. On March 12, the Maryland House of Delegates passed a bill to change the state song. A counterpart bill is moving forward in the Senate.

The tune is “O, Tannenbaum.” Lyrics were written by a Confederate sympathizer during the Civil War. The first line, “The despot’s heel is on thy shore,” refers to Lincoln. The first verse also calls on Marylanders to “Avenge the patriotic gore/That flecked the streets of Baltimore.” That refers to the civilians killed in the Pratt Street Riot in downtown Baltimore on April 19, 1861.

Riots were nothing unusual in Baltimore; in fact the city bore the nickname “Mob Town” during the 1800s precisely because of its frequent riots.

Nine days after the Civil War broke out, troops from Massachusetts and Pennsylvania were traveling through Baltimore. They were on their way to defend the nation’s capital. They rode the train to Baltimore’s Washington Street station. In those days, locomotives were not allowed to pull trains through downtown streets, in Baltimore and in several other cities. The soldiers were supposed to stay on the rail cars while horses drew the cars to the Camden Yards station, but a mob attacked and damaged the cars, and most of the soldiers had to get out and walk down Pratt Street toward Camden Yards.

The mob grew and continued to attack the soldiers, with bricks, clubs, paving stones, and finally with pistols, and the soldiers fired back. At the end of the melee, four soldiers and 12 civilians were dead. The remaining soldiers, except for 36 who were injured, boarded the southbound train and went to Washington, D.C.

This is something Marylanders are proud of?

As a former Marylander myself, I can say many aspects of the state are worth glorifying. This isn’t one of them.

Do Marylanders really despise Lincoln? Do they really support  the ideals of the old Confederacy, which was formed to protect slavery? That’s what their state song says.

***UPDATE*** On March 20, 2021, the Maryland State Senate unanimously voted to retire the state song. The bill now goes to Governor Larry Hogan for signature. Hogan has previously resisted efforts to change the song.

Several of the states of the old Confederacy have state songs with racist lyrics, and many more contain slights or insults to Native Americans. Florida’s “Old Folks at Home” has had several “lyric lifts,” attempts to make the song more palatable. Maybe you learned it in school as “Way Down Upon the Swanee River.” I did. The line about “Oh, darkies, how my heart grows weary,” has been changed to, “Oh, dear ones.” The line about “Still longing for the old plantation,” is now about, “Longing for my childhood station,” whatever that means.

Stephen Foster, a white man, wrote this song. It’s unlikely any Black folks who had left the old plantation were longing for it. Maybe white people who wrote these songs needed to pretend they were Black so they could have the emotional expression they needed.

The Pull of “Heart Songs”

“Carry Me Back to Old Virginny,” with its lyric, “That’s where this old darkey’s heart am longed to go,” tugs hard at the heartstrings. Several of these songs do. They come from the minstrel tradition which, with all its racist faults, produced singable songs with deep emotional pull. My grandfather loved to sing the song. The line about “Old Virginny, the place where I was born,” made him misty-eyed. He wasn’t even born there. White people loved the pull of “My Old Kentucky Home,” (original lyrics: “’Tis summer, the darkies are gay.”)

So did Frederick Douglass, believe it or not. In his book My Bondage and Freedom, Douglass wrote that “My Old Kentucky Home” and others were, “[H]eart songs, and the finest feelings of human nature are expressed in them. [They] can make the heart sad as well as merry, and can call forth a tear as well as a smile. They awaken the sympathies for the slave”, he stated, “in which anti-slavery principles take root and flourish.”

Still, the Kentucky legislature has cleaned up the state song lyrics several times. The Virginia legislature voted in 1997 to declare “Carry Me Back,” to be state song emeritus and initiated a contest for a new song.

The heart songs continue in some states of the old Confederacy without the racist lyrics. “Georgia on My Mind,” written by Hoagy Carmichael and Stuart Gorrell, both white, became Georgia’s state song in 1979. It is associated most closely with Ray Charles, who, in case you need to be told, was definitely not white.

Look At Who’s Left Out

Almost all the state songs of the United States are in English. New Mexico has an official Spanish Language State Song, “Así Es Nuevo Méjico“. Hawaii’s state song is actually in Hawaiian, “Hawaiʻi Ponoʻī,” and was one of the national anthems of the Kingdom of Hawaiʻi and also was the National Anthem of the Republic of Hawaiʻi. It mentions a king, probably King David Kalākaua, who wrote it. I have to admit that I only vaguely knew about Hawaii’s history before 1900, and assumed the state song would be  Aloha Oe, which shows you the kind of haole assumptions I can make.

All the others are in English.

In “Where the Columbines Grow,” one of Colorado’s two state songs, they sing of “pioneers fearless and free,” and claim that, “The war whoop re-echoes no longer/The Indian’s only a name.” There are 30-thousand Native Americans in Colorado who might dispute that, descendants of the Apache, Arapaho, Cheyenne, and Pueblo who had the land taken from them. Also the two federally recognized tribes: Ute Mountain and Southern Ute. The original version Washington’s State Folk Song, “Roll On, Columbia,” has several verses about how General Philip Sheridan drove out Native Americans, hanging some Native men he took prisoner.

Several states have multiple state songs. Maybe they’re trying to be inclusive. Tennessee, where I grew up, has nine, plus a state rap. That may be because Tennessee has two powerful and multi-faceted musical traditions rooted there: African American traditions from the roots of the blues through ragtime, jazz, and rock and roll in Memphis, and the strongly white country/bluegrass tradition in Nashville.

Other states have popular standards to represent them: “Tennessee Waltz” is another of Tennessee’s; “You Are My Sunshine,” Louisiana’s, written by former governor Jimmie Davis. My personal favorite is “Oklahoma” . from the Rodgers and Hammerstein musical. Many more are frankly unmemorable, with borrowed or pedestrian tunes, and non-committal rhymes such as “verdant hills” and “rocks and rills.”

They nearly all reflect dominant white culture. They’re about us, white people. There’s a lot more to the United States than white people. State songs are supposed to represent us. Do we want to say to the world that we thought the Confederate cause was a good idea, and slavery was just fine with us? Do we want to say that all the Native Americans are gone? They aren’t. They still live on the edges of the land we cheated them out of.  Do we want to point out that we killed a lot of them?

Maryland State Senator Cheryl Kagan is sponsoring the bill in the Senate to change the state song. She told the Capital News Service, “It’s way past time to eliminate this outdated and offensive tune from our law books.” She added, “Repealing the state song should be accomplished in five minutes so we can go back to the people’s business, really pressing business.”

George William Brown, who was mayor of Baltimore during the riot, wrote an excellent description of it: Baltimore and the Nineteenth of April, 1861. He tried to protect the soldiers; at one point he reportedly grabbed a musket and shot a rioter or two himself.

Here’s a list of all the state songs. Plus a list of what the Dallas Observer thinks are the best state songs—it does not include “Oklahoma,” but, then, it’s a Texas newspaper. Here’s another list of songs about every state. They’re mostly better than the state songs.

And, finally, just so you know, I don’t know who the group is who sang “Maryland, My Maryland” in the example I provided. They are excellent musically, and their pronunciation is crisp and clear. It is, in fact, much too clear. They pronounce the name of the state as Mary-land, which admittedly is the way it’s spelled, but the only people I’ve heard pronounce it that way are British. The proper pronunciation, according to many of the state’s inhabitants, is “Murralun.” They also pronounce the name of the state’s largest city as “Bawlmer.” Two of my former colleagues at the Voice of America, Steve Ember and Faith Lapidus, have this lesson in Maryland phonetics.

This post is part of a series. The series begins with “What Does It Mean to Be White?“